The Batwoman pilot did a decent job of establishing Ruby Rose as Kate Kane, and despite some rough spots worked as a setup for the rest of the season.

The Batwoman pilot did a decent job of establishing Ruby Rose as Kate Kane, and despite some rough spots worked as a setup for the rest of the season.

For all the fuss about Batwoman (The CW), you’d have expected a bit more from it than what was delivered in Batwoman Episode 1, though I suppose that’s an inevitable consequence of starting a solo series. You might have gotten used to Ruby Rose in Kate Kane’s full regalia, with the ravishing red hair and the lippy and all that, as seen in the Elseworlds crossover event and an unending torrent of promotional material, but that isn’t how we find her in the Batwoman pilot. Here, she spends most of the episode sans suit, and when she does dress up it’s in a stripped-down and hemmed-in version of Bruce Wayne’s Batsuit that makes her head look weird.

Needs must, I suppose, especially when Gotham City has been lamenting the absence of the Caped Crusader for three years. (Bruce Wayne has, naturally, been missing that whole time too, but there’s still a scene midway through the Batwoman pilot when Kate discovers the Batcave and realizes that her maternal cousin is also Gotham’s symbol of vigilante justice. Citizens in DC stories are really terrible at putting two and two together.) Just when it seems like time to move on — the episode opens with a charity event to turn off the Bat-signal, and Kate’s father, Jacob (Dougray Scott), running an elite security service, The Crows, with a mandate to keep the city safe — a villain emerges who reiterates the need for a costumed crimefighter. Her name is Alice (Rachel Skarsten), a manic, Lewis Carrol-quoting baddie with a personal vendetta against Kate and Jacob and a legion of henchmen in Wonderland masks. In the final moments of Batwoman Episode 1, she’s revealed to be Kate’s presumed-dead twin sister, Beth, for whose apparent death Kate has always blamed Batman.

A lot of this is inelegantly explained by Kate’s voiceover narration, which emphasizes the security vacuum left in Batman’s absence, Kate’s daddy issues, her desire to prove herself by traveling the world and training with various esoteric masters of martial arts and survivalism, and her issues with authority, which go as far back as West Point, when she was expelled for homosexual shenanigans with fellow trainee-turned-Crow, Sophie (Meagan Tandy). Sophie’s present-day kidnapping by Alice’s goons is what lures Kate back to Gotham in the first place, though it’s hardly the romantic union she expected since Sophie is now married to a (male) colleague. 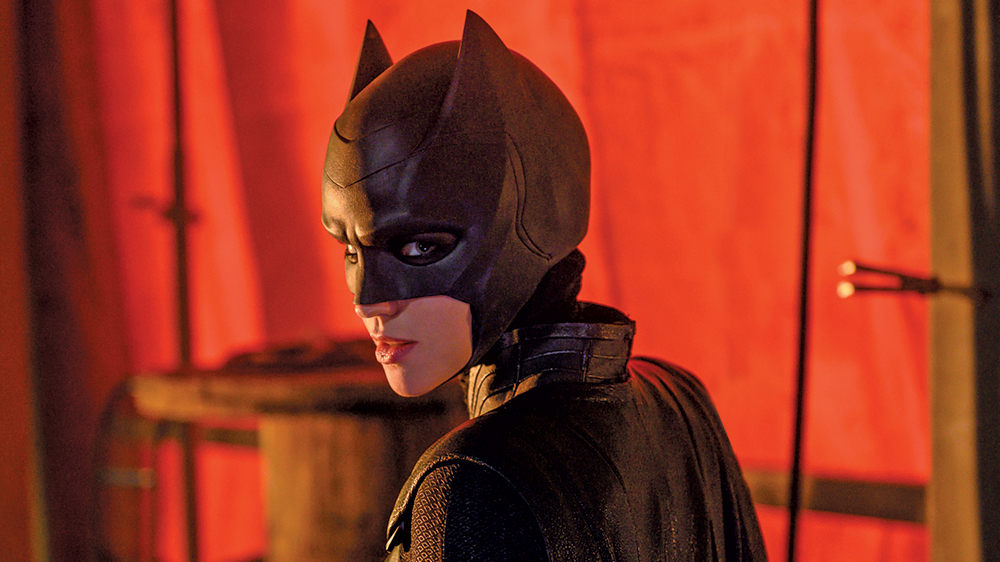 Nothing much, thankfully, is made of Kate being an out lesbian, which has always been a part of the character’s comics identity anyway. All that idle speculation about Batwoman pandering to social justice politics was completely unfounded since the premiere scarcely makes mention of such things. Kate’s sexuality is just a thing, barely remarked upon, but it turns out that pining for someone is just as tedious in same-sex love triangles as it is in heterosexual ones — I hope there’s less of that going forwards than the Batwoman pilot suggests there might be. But as far as happy-clappy notions of civil equality go, they’re pretty integral to the setting of a lawless Gotham rife with institutional corruption and elaborate supervillains. This isn’t a political agenda crowbarred into a comic book story; it’s a comic book story with an explicit political undercurrent.

Kate’s desire to help people while proving herself is capably expressed by Ruby Rose, who finds the right register for the character — serious without being maudlin, and funny without being dopey. It’s hardly a genre-redefining performance, but it doesn’t take long for Rose to prove that she’s suited to the character in more ways than just appropriate identity optics. She has fun interactions with Wayne Enterprises’ steward, Luke Fox (Camrus Johnson), son of Lucius, and her step-sister Mary (Nicole Kang), and she handles herself well in the action sequences, which are pretty solid. Again, this isn’t The Raid or anything, but at least they’re filmed for clarity and believability and not edited to within an inch of their lives.

In many ways, Batwoman Season 1, Episode 1 does exactly what a pilot episode is supposed to: It establishes Kate Kane within both the Wayne family and this version of Gotham, and it raises questions (some of them not intentional, I suspect) about where the show and its various characters are going to go as the season progresses. It had its rough spots — some poor pacing here and there, the odd leaden line or unconvincing delivery, and the occasional “hang on, what?” plot element — but no more so than other pilots in similar shows. It was fine. And for now, that’ll do.