“25 Years to Life” explored matters of gender and identity in a way that is about half as clever as it thinks, and we get a resolution in George Bell’s murder case.

“25 Years to Life” explored matters of gender and identity in a way that is about half as clever as it thinks, and we get a resolution in George Bell’s murder case.


This recap of Bluff City Law Season 1, Episode 3, “25 Years to Life”, contains spoilers. You can check out our thoughts on the previous episode by clicking these words.

“25 Years to Life” was at once both the best and worst episode yet of NBC’s Bluff City Law. On the one hand, it’s enjoyable to see such a stuffy, moralistic procedural loosen up a bit, both in terms of its plot (more on that soon) and its characterization. But on the other hand, its meditations on identity politics were about half as clever as the show thought, still building to a saccharine conclusion, and the episode just couldn’t resist having its heroine once again break down over her daddy issues.

Sydney Strait (Caitlin McGee) obviously has issues following the death of her mother, her father Elijah’s (Jimmy Smits) infidelity, and the fact that she now has to work alongside her brother, Emerson (Stony Blyden), who was born of Elijah and his mistress. We also learn in Bluff City Law Episode 3 that Sidney was adopted, which helpfully explains why she’s so irrationally resentful of Emerson, who is clearly a nice guy despite wearing his headphones around his neck. In a way, he’s more her father’s son than she is his daughter.

I get all this — but I still think it’s tedious. Sydney, a hard-charging former corporate lawyer and now a no-holds-barred civil rights campaigner, feels like she’s slipping into someone else’s skin every time she’s asked to storm away from lunch with Emerson or break down in tears in Elijah’s arms. The character only operates at either extreme of the emotional spectrum; callous or sensitive to a fault. The lurches back and forth are jarring. The late scene in “25 Years to Life” in which she confesses to Elijah how she feels is only saved by a remarkable Jimmy Smits performance, who is much better than McGee at working that nuanced middle-ground. 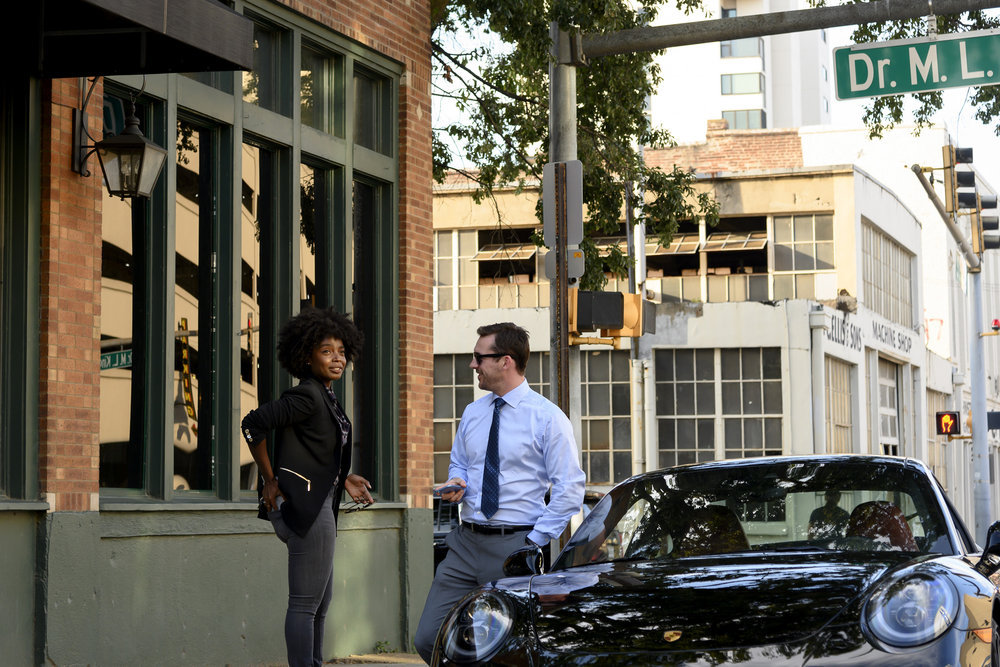 Part of this can be blamed on the show’s writing; it has the same issues when it comes to the plotting of the week’s legal cases, too, which are always looking ahead to whatever moral point they’re making without ensuring that the details are compelling on their own. In Bluff City Law Episode 3, Sydney and Anthony (Michael Luwoye) are asked by their former law professor to represent him in his attempts to sue an online dating site for not allowing him to identify as 42 even though he’s twenty years older. What initially looks like an older man simply looking for an excuse to date much younger women eventually becomes something else entirely, when the professor smugly reveals that his girlfriend is 59, his “son” is 25 and he can’t wait to tell her what happened, and that Sydney’s persuasive argument about identity and acceptance will be used in a Supreme Court case fighting for the rights of people with legitimate claims. It was all a do-gooder ruse.

Jake (Barry Sloane), meanwhile, defends convicted killer George Henry Bell (Scott Shepherd) in court in light of the recent DNA evidence which proves his innocence. But his original confession still stands. The whole thing eventually reveals police bias and corruption, exposed by Sydney’s ex-husband and current chief of detectives Robbie (Josh Kelly), leading to a full and immediate exoneration of George Bell, another victim of the institutions intended to serve and protect, and a man who sacrificed his own freedom to protect his wife, who was suffering in the aftermath of his conviction. I was surprised he didn’t stop midway through the trial to adopt an orphan and donate to charity. (Speaking of which, Della Bedford (Jayne Atkinson), Sydney and Elijah all make a huge donation of clothes to the Memphis Union Women’s Shelter, as though they have to meet a daily altruism quota or something.)

Bluff City Law Season 1, Episode 3 was mostly fine but full of these grating little details that reveal it to be hopelessly try-hard in its messaging — something which detracts from it as both a legal and a family drama. It has interesting things on its mind but lacks the necessary finesse to express them, and can’t help but come across as obvious and trite in its conclusions. Having the “right” politics isn’t enough. And “25 Years to Life” proved that, beyond those politics, it doesn’t really have much else to say.