Explained Recap: Should We Eat The Rich?

“Billionaires” asks the question of whether the ultra-wealthy are good or bad for the plebs, but the answer remains predictably elusive.

“Billionaires” asks the question of whether the ultra-wealthy are good or bad for the plebs, but the answer remains predictably elusive.


This recap of Explained Season 2, Episode 2, “Billionaires”, contains spoilers. You can check out our thoughts on the previous episode by clicking these words.

Explained Season 2, Episode 2 spends its opening moments contextualizing the lavish expenses of the filthy rich. When a private jet is the relative price of a bus ticket, and a private island is the relative price of a mortgage downpayment, hedonism doesn’t look so hedonistic. It looks a lot like practicality. It’s an interesting opening argument, equating the world’s .0001% with ordinary middle-class families who holiday every year.

It’s not a bad argument, either, since it lets the audience know that their entrenched anti-rich arguments aren’t on as sure footing as they thought. It’s also the underlying question of the episode. We know these absurdly rich people exist, but are they a good or bad thing for the plebs? The answer isn’t as obvious as you might think.

Billionaires have evolved throughout history, from Cornelius Vanderbilt, John D. Rockefeller and Andrew Carnegie, elevated by the expansion of the economy to a Continental scale, to modern-day money-men afloat on a river of dinero stemming from global big-business and the growth of new technologies and corporations. In modern currency, billionaires like Elon Musk and Jeff Bezos are worth twice as much as the Vanderbilts, Rockefellers, and Carnegies. If all the world’s billionaires were to form an island, it would be the eighth richest in the world.

But what would the export of Billionaire Island be? It’s easy to imagine very little but pollution from yachts and rocket launches, but that’s an oversimplified view of a kind propagated by those people who demand the rich surrender their fortunes to charity but won’t give a fiver to a homeless person. A lot of billionaires use their influence to advance technology, research cures for diseases and perform other acts of philanthropy. At least 200 have signed the “The Giving Pledge” — an agreement to give the majority of their wealth away. 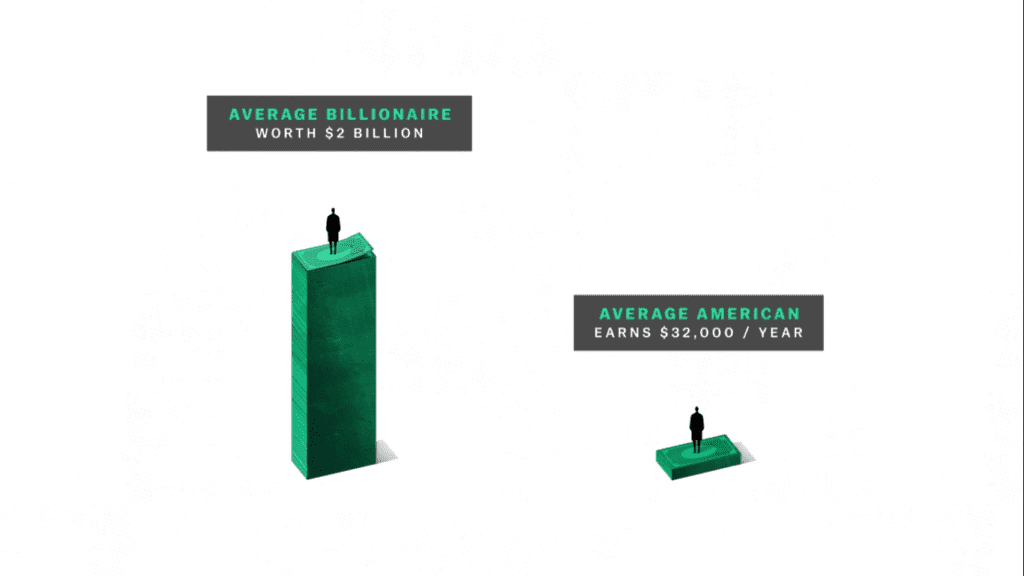 As Explained Season 2, Episode 2… well, explains, our interpretation of wealth is a bit skewed. It’s labor that makes you a millionaire, but it’s ownership — capital — that makes you a billionaire. Most of a truly wealthy person’s wealth is tied up in investments — property and stocks and other often invisible assets that pump up a digital figure to a ludicrous length. This isn’t Scrooge McDuck idling in a mountain of ill-gotten gains. They’re people with portfolios full of untraceable fortunes buried beneath shell companies and paper trails. That’s why it’s hard to know how many there are — or how many billions they have.

A lot of the antipathy towards billionaires is for tax reasons. Labor is taxed at a higher rate than the capital, and that’s providing the rich pay any taxes at all. A building in the Cayman Islands “hosts” 20,000 companies, allowing them to take advantage of tax breaks. 10% of the world’s GDP is held up in these kinds of havens, so there’s no wonder people handing over a chunk of their wages in income tax have a problem with the idea.

But these are systemic problems, not individual ones, and Explained Season 2, Episode 2 argues that this is an important distinction. The distribution of wealth has never been fair, especially within hierarchical social structures. It’s people like Bernie Sanders, who appears in the episode, who argue that the loopholes are at fault more than those who profit from them.

It’s a complex issue without an easy answer or solution, so while twenty minutes is by no means enough time to do the topic justice, it does a good job of raising contrary points of view. While there are obviously self-serving billionaires who populate the world’s richest rankings — particularly Russian kleptocrats who have profited from their country’s natural resources — there are many other self-made men and women who are putting their vast fortunes to use for the betterment of us all. Perhaps there isn’t cause for a peasant uprising just yet.