Home » TV » The Terror Recap: They Saved The Best For Last

The Terror Recap: They Saved The Best For Last

“Into the Afterlife” brought a terrible season to an admirable close, but was it too little too late?

“Into the Afterlife” brought a terrible season to an admirable close, but was it too little too late?


This recap of The Terror: Infamy Season 2, Episode 10, “Into the Afterlife”, contains spoilers. You can check out our thoughts on the previous episode by clicking these words.

After watching The Terror: Infamy finale, I’m once again reminded about the importance of endings. A bad one can leave behind a taste so sour that it’s impossible to think of the series at its best without remembering that bitterness. But what about a very good ending to a bad season? How does that work? If one episode out of ten finally comes together in the way that the rest of it was clearly supposed to, does that make up for all the missteps along the way?

This is the situation we find ourselves in after The Terror: Infamy Episode 10, “Into the Afterlife”, which was easily the best episode of the season and a conclusion that managed to embody what I feel the show has been attempting to do since the beginning; to tell a family story against the backdrop of historical atrocity and prejudice. It was the only episode that managed to strike an emotionally sincere note — several, in fact — and the only one that made genuinely effective use of its real-world basis in history; the simple mention of Hiroshima in a dreamy opening sequence had more power than all the show’s cobbled-together J-horror tropes combined. 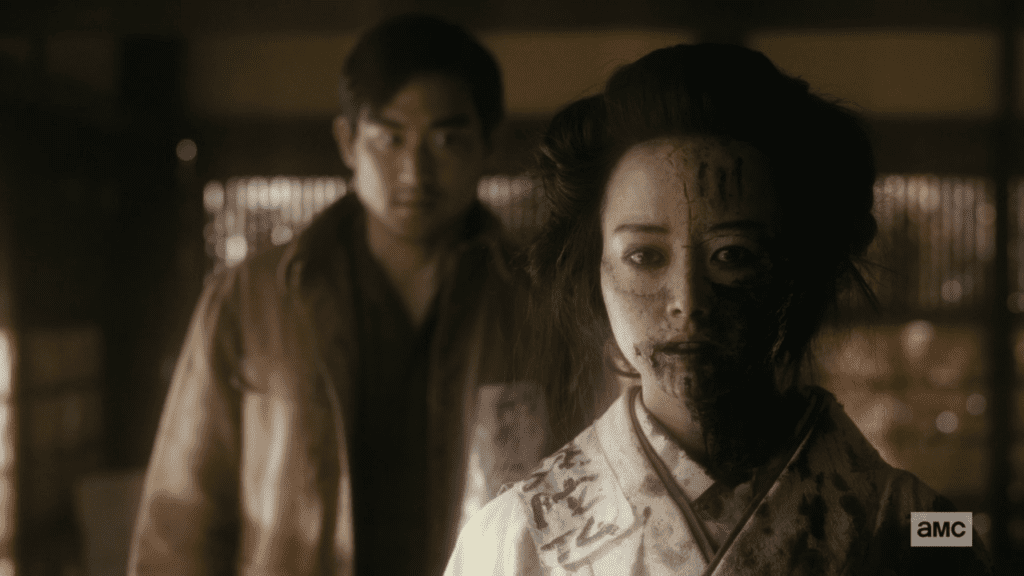 Imagine, just for a second, how great The Terror: Infamy finale would have been if its payoffs had actually been properly earned throughout the season; if, say, the show had displayed any consistent narrative or emotional logic or hadn’t used its characters’ imprisonment in internment camps as a mild inconvenience. Imagine how much we might have cared about Luz (Cristina Rodlo) and Chester’s (Derek Mio) child if we believed in their relationship, or if the latter wasn’t easily the most boring character in a show ostensibly about him. Henry’s (Shingo Usami) refusal to allow Chester to sacrifice himself would have resonated more if they hadn’t constantly, arbitrarily been at odds, as would their final sequence by the boat. Yuko’s (Kiki Sukezane) meaningful reunion with her former self felt like the right ending but still failed to address what happened to the spirit of Jirou, or why he wasn’t present in any of her purgatorial flashbacks until the show just made him up in the final few episodes and we had to pretend as though he’d always been there. Virtually everything “Into the Afterlife” did well came with some kind of caveat.

But I can’t deny that the episode was effectively moving, full of striking imagery and a real connection to the history it had only previously used as set-dressing for a bizarre, nonsensical story about a demon. The final credits featured photographs of the cast and crew held against those of relatives who were interned or enlisted during the war — a striking connection that speaks to the power the show might have had if only it had been any good. The Terror: Infamy Season 2, Episode 10 was a great finale to an awful show, and in an odd way, I think that might be worse than if it had just stayed terrible all the way through.