The Watchmen pilot may not have the same breathtaking pace of the initial episode of Lindeloff’s Lost or the well-developed intrigue of The Leftovers, but will leave the viewer with the potential promise of a great adaptation of a beloved graphic novel the fans deserve.

The Watchmen pilot may not have the same breathtaking pace of the initial episode of Lindeloff’s Lost or the well-developed intrigue of The Leftovers, but will leave the viewer with the potential promise of a great adaptation of a beloved graphic novel the fans deserve.

Watchmen has always been about the way there are no real universal rules in nature; we are governed by rules in the various societies we grow up in, and individuals can also live by their own code while not recognizing a single authority. There are no moral absolutes unless you are a bunch of bedsheet-wearing racists who not only take to the streets in 1921 Tulsa, Oklahoma to rid their lands of anyone who has the skin color darker than a quick tan, but by shooting bullets into the chaotic streets as well. This is the opening scene of HBO’s new series, Watchmen, from Lost co-creator Damien Lindeloff, whose initial opening episode “It’s Summer and We’re Running Out of Ice” is a morally invigorating look at the classic graphic novel series that only has one way to go but up after the disastrous 2009 film adaptation.

After the initial opening, the Watchmen (HBO) pilot jumped into the present day and an alternate universe. There, we see a cop, Office Sutton, pulling over a good old boy, smelling of alcohol masked in Coca-Cola with a knit ski mask stained with a Rorschach inkblot mark in his glove compartment. It resembles what one would wear as a member of The Seventh Cavalry, a white supremacist organization similar to the Ku Klux Klan. The officer is also covered, pulling what looks like a yellow turtleneck over most of his face. After questioning the suspect, he goes back to his police vehicle, calls it in, and has to go through a protocol to release his handgun that is locked on his dash. This kind safeguards against police brutality and shootings backfired, as the man puts on his mask and pulls out a machine gun armed with a silencer as Sutton argues with his supervisor, shoots up him up, and then lightly tosses a head of lettuce through his windshield onto his lap.

The head of police is Chief Judd Crawford (Don Johnson, having quite the year with this and last spring’s Dragged Across Concrete). He then pulls him aside during a play by Looking Glass (Tim Blake Nelson), who wears a shiny, metallic mask that looks like it represents the tip of a condom, and informs him about the bad news. After three years of hiding, The Seventh Cavalry has awakened out of hibernation. Crawford asks him why now? Why start all of this up again during peacetime and escalate the matter by shooting an officer in the line of duty? Looking Glass, having an expression on his face that grows more concerned than a fellow brother in the yellow being shot: It might have been needed because it wasn’t just because he was a member of a once sleeping organization, but because what was in the back and laying on top of that truck bed. An emergency meeting is called, a video of the terror group that was just released was played for the “good” side of the law/vigilantes. Interestingly, it seems everyone in this government-funded force is allowed to express their flair with different masks, even a guy in a panda outfit, like they were auditioning to wait on tables at Chotchke’s with Jennifer Aniston, including Panda and Red Scarce. Despite their individuality, the majority vote to relax the restrictive protocol of sworn officers of the law being able to carry their firearms.

The reason for the yellow masks is so the police hide their identity, and it has been against the rules for years to tell anyone you are a police officer, like the man or woman who failed to take the Hippocratic oath out of nursing school to inject the poison in the inmate the state chooses to save on taxes this year. Sutton’s cover story was that he was taking night classes studying engineering. Meanwhile, Angela Abar (Oscar winner Regina King) begins to explain to a class of pre-teens she retired from being a cop after she was shot, and the bad guys pumped her insides full of hot piping lead. This noticeably splits the tone of the class into appreciation or disdain cops, as a kid asked did she pay for her bakery with, “Redfordations?’ This incites the daughter of King’s character, Rosie, to tackle this ten-year-old boy in class because he feels he’s racist. King disagrees, “He’s not racist, but he’s off to a good start.’’ Of course, did we really think Ms. Abar was going to give Mrs. Toll-house a run for her money with her chocolate-chip cookies? When she gets to the bakery, which still isn’t opened yet, she walks down to her super secure basement full of gadgets, leaves in her Sunday’s best superhero outfit changing into Sister Night, and jumps into a car with windows tinted so black they couldn’t possibly be approved by any DMV. 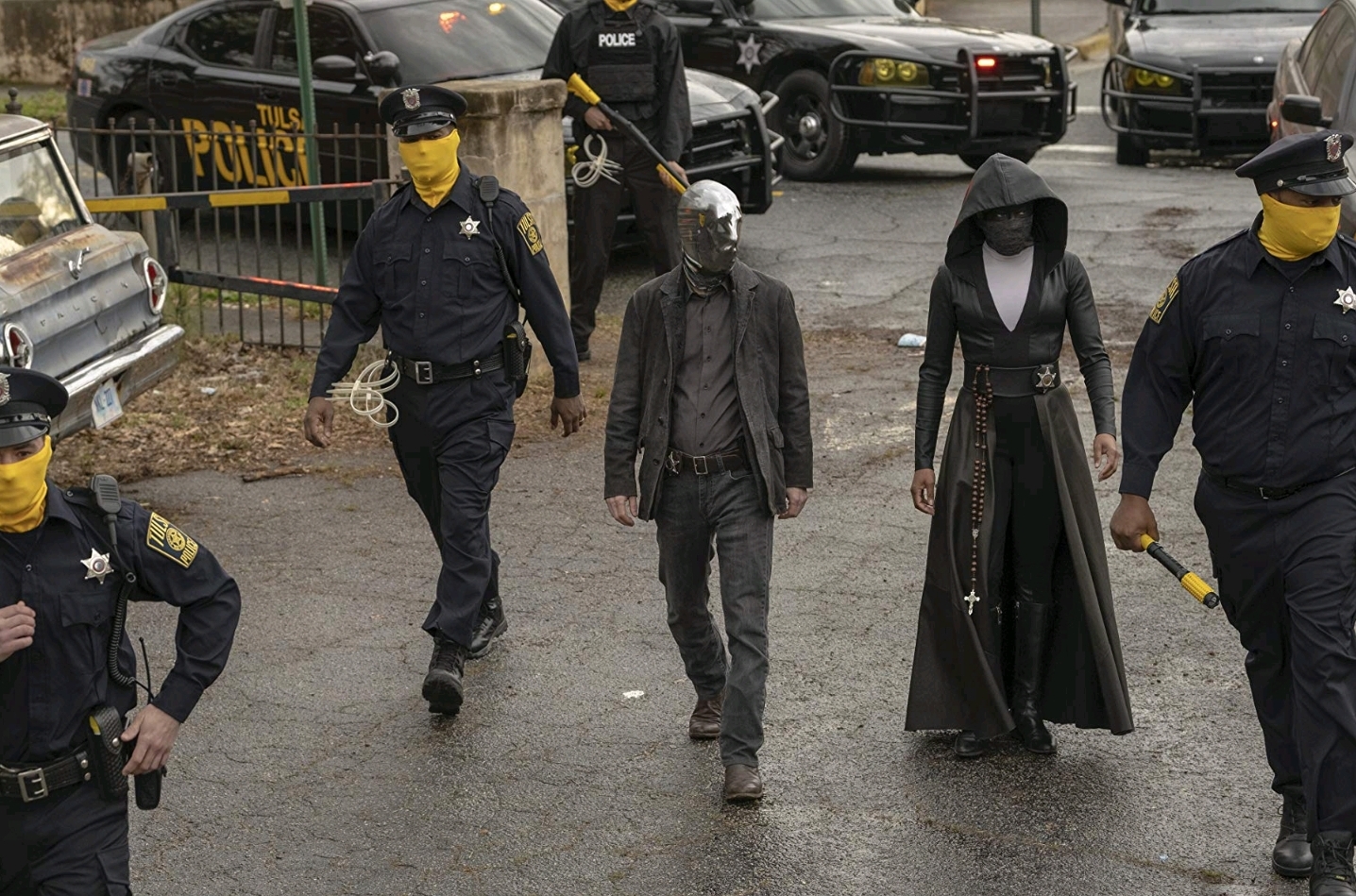 After rounding up a suspect, Abar/Night takes the law into her own hands, literally, kicking the blood and p**s out of him to find the location of the newly minted white supremacist network, in a nearby Oklahoma ranch. As Night and the gang creep up on the trailer where the Cavalry is taking lithium batteries out of watches, throwing them into a bucket until an alarm goes off. They all take an immediate defense position, running for the infamous truck, and pull a machine gun that would look too small on any American tank. They spray bullet after bullet, creating hamburger meat out of the cows that are peacefully grazing, trying to pick off Night and friends as they find the nearest downed cow to hide behind (note to self, when in a machine-gun fight, always find the nearest down domesticated breed of ox, because they stop bullets in their tracks). Meantime, Chief Crawford and Pirate Jenny are providing eyes in the sky, flying the Owlship, blowing up the plane the terrorists try to escape in with a stream of steady fire. The night though, isn’t as successful, as she can’t prevent the prime suspect number one from committing suicide by swallowing a pill made of cyanide.

The last 15 minutes or so are compact with happenings and leaving questions after the great cattle battle. We are introduced to a mysterious character, Adrian Veidt (Jeremy Irons), who is celebrating his anniversary with his employees, who call him “Master.” He is gifted with an old pocket watch, that took some doing to get. The group celebrates taking down this domestic terrorist organization by having dinner; Crawford does some cooking of his own, snorting a line of coke up to his nose, leaving a powdered residue for all to see (that most, surprisingly, are understanding he had a tough week). Meanwhile, the Chief is called to the hospital because officer Sutton has woken up, and blows a tire from planted road spikes on the way there. Angela then leaves Cal with a gun at home after receiving a call, and telling her that he knows who she is, and to go to the “big oak tree out on Rowland Hill road.” When she arrives, she finds an older adult man named Will Reeves (Louis Gossett, Jr.), wheelchair-bound and in a soft red tracksuit. While under that enormous tree, Angela sees her mentor Judd hanging from the branch with a rope around his throat.

In the end, Watchmen Episode 1 is not an easy watch and will be decisive for hardcore purists, and the ones open to a new spin or interpretation on Lindeloff’s take on moral relativism versus moral absolutes. Lindeloff also leaves us with more questions than answers. Like most pilot episodes, this outing sets up the main plot, and character motivations. As he said in interviews, this isn’t a reboot or a remake of Watchmen; as it’s a remix. The initial outing is interesting enough to keep the viewer coming back for further episodes, and the stores should delve deeper, creating greater interest, as most shows do, after their pilot airs. Sorting out the linear narrative he wants to create, from a man who knows how to juggle timelines, this will take time and several episodes; which would suggest how this show might be meant to watch binging, instead of weekly episodic viewing. In the meantime, until next week, we will have to ask ourselves: Did they kill off the Seventh Cavalry? If so, who exactly lynched Chief Judd Crawford? Where does the mysterious Adrian Veidt fit within the storyline and how will he plan to spread fear? Why does Reeves know so much about Angela? Why was their rainstorm of baby squid-like creatures from the sky (similar to Frog Raining)? Speaking of her, does Angela’s family history fit into this equation?

Watchmen Season 1, Episode 1 may not have the same breathtaking pace of Lost’s first outing or the well-developed intrigue of The Leftovers, but the heavily-weighted storylines of ethical dilemmas will leave the viewer with a promising outlook for a potentially great adaptation of a beloved graphic novel the fans deserve.