This recap of Mr. Robot Season 4, Episode 3, “403 Forbidden”, contains spoilers. You can check out our thoughts on the previous episode by clicking these words.

“Letting people in doesn’t have to hurt — but it can,” Mr. Robot’s voiceover tells us, the viewer. For a show so frequently residing in a world of emotionally detached hackers and capitalists, a sudden foray into emotional intimacy, it can sometimes come off as awkward and sophomoric in its misanthropy. Everyone Eliot has been close to is either dead or so damaged from the death of others they might as well be. “403 Forbidden”, which is framed around two tales of interpersonal relationships, retreads this theme, but centers the conflict between emotional intimacy and success.

In classic Final-Season fashion, we witness the origins of the Big Bad. In 1982, a young Whiterose and her business partner, Chen, are secret lovers. Whiterose is reluctant to go out for business drinks, and when Chen returns, Whiterose is wearing a dress. “It belonged to my mother”, she says. “It’s simple, but I always thought it was elegant”.

We cut to the present; Whiterose looking at the same dress, as she plans to wear it in the coming days. Mr. Robot Season 4, Episode 3 seems to be suggesting a link between Whiterose’s gender identity and her masterplan. The idea seems to be that coming out to the world as trans is similar to revealing your plan for world domination. I understand where Esmail & co are coming from, but for such a sensitive issue it seems not quite as thought through as it should (at least Mr. Robot has refused to connect Whiterose’s gender identity with sexual depravity — a la Buffalo Bill).

Whiterose then discusses with her assistant their need to keep surveillance on Elliot, and the assistant implores her to be patient about the Price business. If the white dress is one “Rosebud”-esque memory trigger, then apparently the word “patience” is as well  (the scene makes it seem as if this is the first time she’s heard the word since the 70s, such is the haphazard framing of Whiteroses’s flashbacks).

Now she is at a wedding. Chen is about to get married. He learns that Whiterose didn’t get appointed as Chinese Ambassador to the US (ending up with a measly “Head of State Security” position — and who wants that!) It’s unclear whether they planned to annul the wedding had Whiterose been successful; it is implied that they could be together if they move the US, as if America in the 80s was a utopia for the gay community. Whiterose implores Chen to be patient but instead, Chen slits his own throat. The camera shows Whiterose running up to him as blood covers white roses — get it, white rose, like her name Whiterose (is the show trying to suggest that her name came from this one incident? As a memory of Chen? Is it just trying to be cool? Either way it’s flimsy). 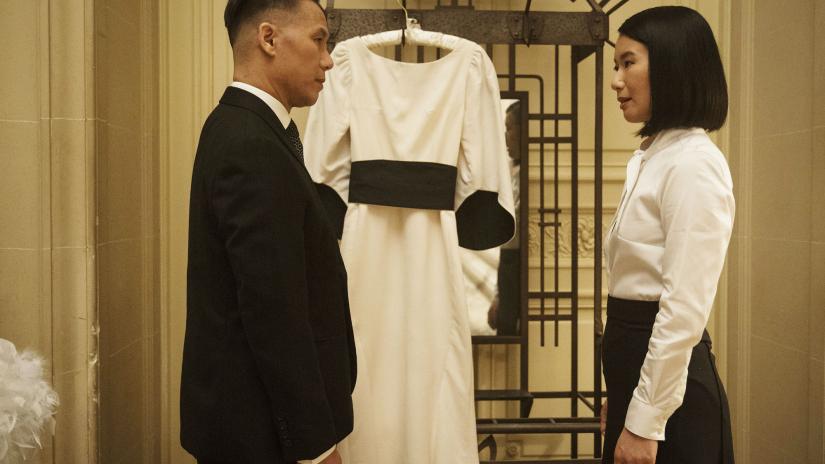 Back in the present, Whiterose shouts “No!” Apparently that experience with Chen taught her to… not be patient? Because patience can kill your lover? As with the roses, this whole origin story is sweaty. Are we meant to imply that this event leads to Whiterose’s plan (if so could the Washington Township plant be related to Chen? Maybe a time machine?). Regardless, Whiterose has “officially run out of patience” and ensures that the board must meet tomorrow (even if it is Christmas), and Tyrell will be CEO. “If there is one way to disrupt a man’s plan, it is to destabilize his timeline”. It’s looking tight for Elliot.

Speaking of Elliot, the other story of intimacy in Mr. Robot Season 4, Episode 3 involves his attempt to hack into Cyprus Bank. Darlene tracks down Olivia Cortez, and unfortunately, there are several added hurdles that are apparently beyond Elliot’s hacking ability. What can and cannot be accomplished by a typing montage seems to fluctuate episode by episode, but in “403 Forbidden” it depends on the need for a physical decryption key (I guess two-factor authentication is worth it after all).

Elliot finds Olivia’s date has stood her up, and he decides to go for it himself. As always, Elliot brings his a-game, bonding over delightful topics such as dead mothers and morphine addiction. When Olivia’s date finally arrives, she bolts, wherein Elliot decides to run after her. What would normally be a charmingly sweet sequence of the two going home together is undercut by the knowledge that Elliot is doing this for the encryption key. He sneaks into her bathroom in the middle of the night to hack into her account, but she wakes up, and they end up bonding over… suicide… another delightful topic. Elliot has problems, and can only open up to others who have similar problems. It’s a shame that he is only connecting to complete the mission.

Because of his pursuit and desire to defeat Whiterose, Elliot cannot have a personal life. Not only is he restricted from emotional connection, but he under constant surveillance. When he returns to his apartment, Tyrell is there. In out-of-character stupidity, Tyrell yells at Elliot the news of his new position. Apparently even the new CEO of E-Corp isn’t used to secrecy. Unlike Tyrell, Elliot has spent his whole life building up walls.