Home » Film » Film Reviews » Dolemite Is My Name Review: Eddie is Back

Dolemite Is My Name Review: Eddie is Back

A funny and affectionate look at the making of an independent blaxploitation movie. Dolemite is my Name is a blast and a well overdue return to form for Eddie Murphy.

A funny and affectionate look at the making of an independent blaxploitation movie. Dolemite is my Name is a blast and a well overdue return to form for Eddie Murphy.

It’s been a long time since we saw Eddie Murphy really flex his comedy muscles. A coiled spring of natural charisma and raw talent, Murphy was a trailblazing force of nature during the 80’s and early ’90s before a string of weak, one-note performances sent him into something of a self-imposed exile. When I signed up to review the new Eddie Murphy vehicle, Dolemite Is My Name (Netflix), I wondered which Eddie were we going to get: Trading Places Eddie or Norbit Eddie? I’m pleased to say Eddie’s back.

Murphy stars as Rudy Ray Moore a struggling comedian/singer in 1970’s LA who moved out to the coast to make it as the next Sammy Davis Jr.. When we meet him his career has stalled, his act is outdated and derivative and he is going nowhere. That is until an encounter with a local homeless man inspires him to reinvent his act and become the titular Dolemite, a foul mouthed pimp with tall tales and a memorable rhyming delivery (supposedly a forerunner of rap music) which leads to a sudden reversal in fortune. Unsatisfied with his new comedy success and notoriety, Rudy invests all his cash into making an independent blaxploitation movie. 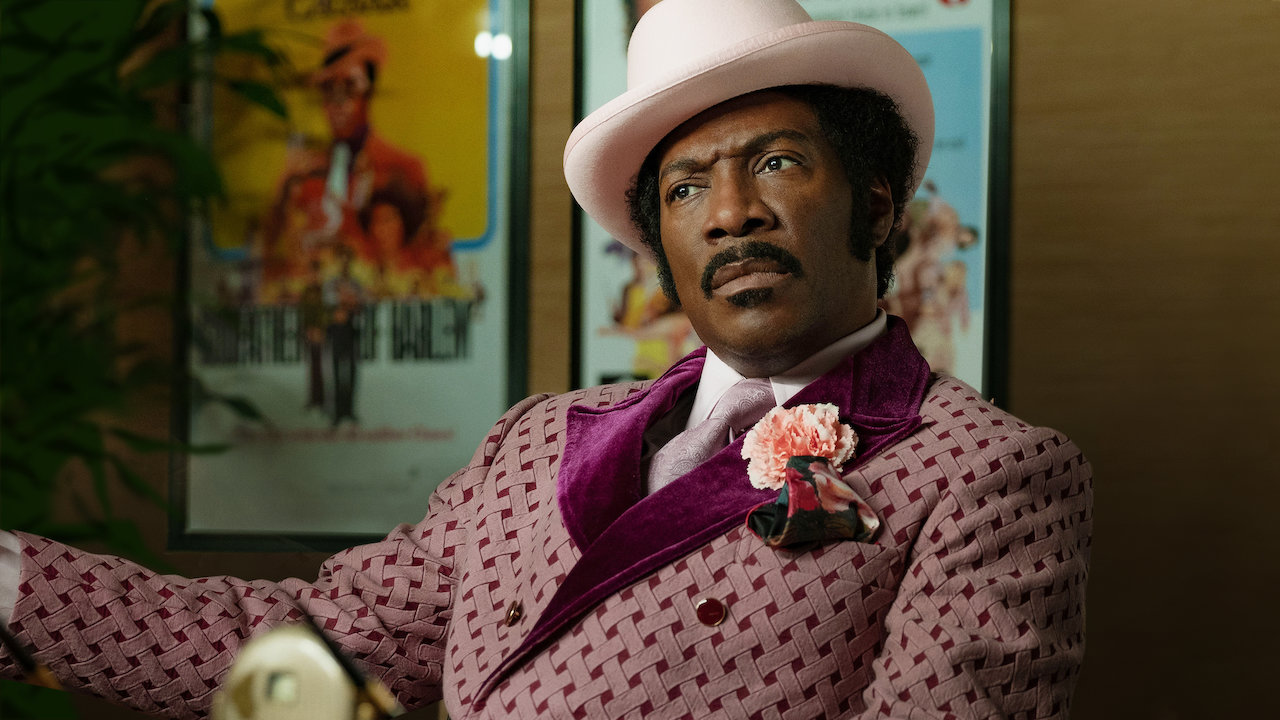 The thing that sets this film apart from some of Murphy’s shall we say less successful outings of the last 20 years is the tone. This has plenty of bad language and broad humour but its heart is warmth and affection for its characters. Rudy is a tenacious character who in the face of consistent rejection from white decision makers in the entertainment business finds a way to get his dream realised. Murphy is perfect in the role; his performance gives credibility to the stand-up scenes, which crackle with his charisma, but he is able to play down when he needs to in order to make Rudy a fully realised three-dimensional character (much in the way he did in Dreamgirls).

Alongside Murphy is a stacked cast of performers including Keegan-Micheal Key (Key & Peele), Craig Robinson (The Office), and Titus Burgess (Unbreakable Kimmy Schmitt) who all add plenty to the general vibe of bonhomie. However my personal favourite is the supporting performance of Wesley Snipes (Blade) in the role of D’urville Martin, the director of the movie. Snipes leaves no scenery unchewed and more or less steals every scene he’s in.

Dolemite Is My Name will inevitably draw comparisons with James Franco’s The Disaster Artist, and Tim Burton’s Ed Wood, other films about a lovable gang of misfits who come together to make a bad film that finds a cult audience. Each of these movies is based on real people and real movies and their enduring popularity hints at how willing we are as an audience to root for lovable underdogs trying to make their dreams come true in spite of their inexperience or access to studio support. For me, Dolemite Is My Name hits these marks with confidence and swagger. This movie is a lot of fun and I really hope this is just the start of an Eddie Murphy re-birth.