Terminator: Dark Fate has hit the cinema, but does it hit the high marks that the franchise once achieved with the original Terminator and Terminator 2: Judgement Day? We do see Linda Hamilton return after her absence in Rise of the Machines, Salvation and re-casting in Genisys. So, without further ado, we will get into the three ups and 3 downs.

There will be MAJOR SPOILERS from now on, consider this your warning. 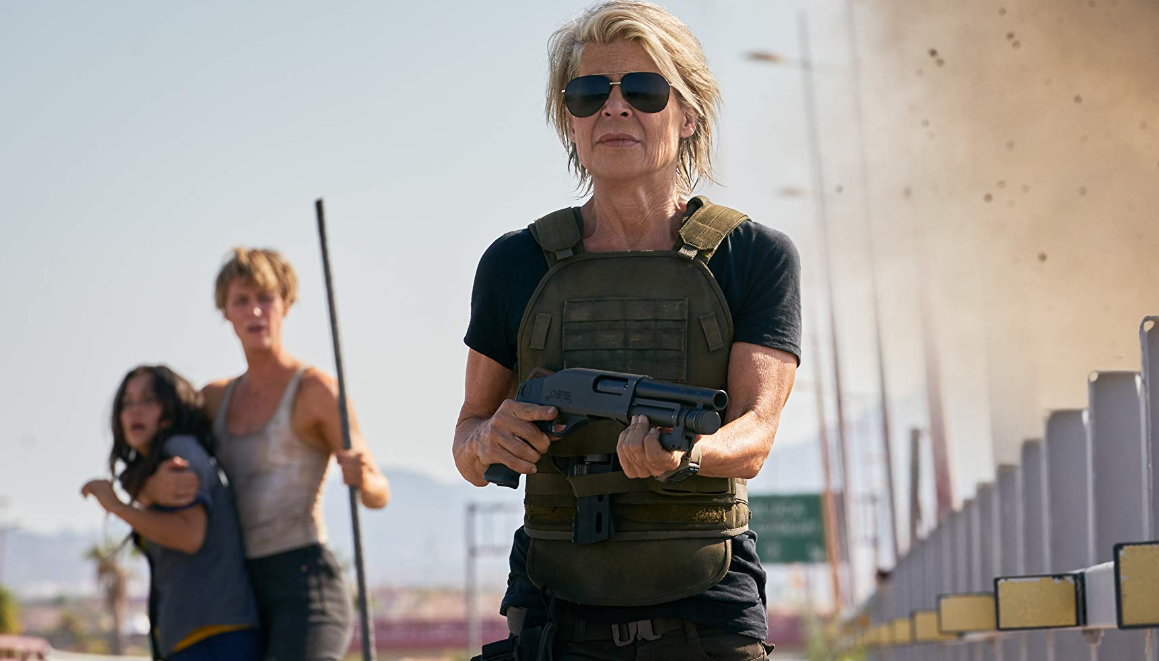 We have a cast that works perfectly here, Arnold Schwarzenegger has returned to the franchise before, but Terminator: Dark Fate is the first time where he truly feels like he has cared about doing so. Linda Hamilton was always going to be the most interesting point of interest, especially after 2018’s Halloween put so much focus on the returning Jamie Lee Curtis that the new cast felt like just numbers. Linda’s return lets her play a hardened, bitter, grief-stricken character that still allows the rest of the cast to shine. Mackenzie Davis is also an excellent choice, with her performance being one that could easily break her out into the action genre for years to come. Gabriel Luna is the villain and this works wonderfully because he brings the straight-faced assassin machine to life, taking blows without flinching and without trying to get an extra laugh out of any of the moments in the movie. Natalia Reyes completes the main cast and as a young lady with everything thrown at her, she shows us a modern version of what Linda Hamilton gave us when it all began.

When it comes to Sarah explaining how to stay off the radar to both Dani and Grace, she goes through many important rules including phones being tracked, CCTV and other identifying devices being used in the world now. This is actually a good point because with new technology this needs to be addressed. The problem with this happening comes from the plan to cross the border to America, where a drone catches up with them; after all the planning Sarah does, the fact she could be caught by something so simple it just leaves you scratching your head.

One of the biggest and most entertaining action sequences comes when Dani first meets the Terminator trying to kill her, while Grace trying to protect her. We get a gruelling car chase with destruction being big and the emotional impact of what happens a driving force for Dani, along with the introduction of Sarah Connor. It is a wonderful opening action scene that lets us know what we are going to be getting through the film.

When you go back and watch Terminator 2: Judgement Day, John Connor gets a backstory before the Terminators arrive; he is stuck in a foster home and wanting to just be a kid hanging out at the arcade. While this isn’t too much, Dani just doesn’t get much more other than she is the one that keeps everything together with her father and brother. She also goes to work. That is nearly all we learn about her before everything happens. This does disappoint because she is meant to be a young woman or late teenager, but she doesn’t have any hopes or dreams, which would be shattered with the events.

Dani is getting a lot of these points, but that is because she has the biggest development in the film. We know she is meant to be like Sarah Connor becoming the target of the Terminator coming from the future and she must learn to survive while dealing with her own grief. We see her become stronger as the film unfolds and we are kept guessing what her importance to the future will be. This might be slightly too heavily hinted through the film with Grace having the answers, which she is reluctant to share, while Dani seems to be the one that can keep the team working together. This might well be what we have seen before in the original Terminator, but why break it when it isn’t broken?

When the group catch up with The Terminator, the Arnold Schwarzenegger one, he is living in a remote cabin in the woods, with a family, living in Texas, and he gets to make fun of the easy availability of guns in America, which does seem like a tasteless joke with all the problems that are going on in the country. The fact it is completely played for laughs doesn’t help that awkward scene.

What do you consider some of the ups and downs in the Terminator: Dark Fate?