Four episodes into its final season, Mr. Robot does something unexpected — becomes a regular episode of TV, all with a distinct A, B, and C plot. Alexa, play slow jams playlist.

Four episodes into its final season, Mr. Robot does something unexpected — becomes a regular episode of TV, all with a distinct A, B, and C plot. Alexa, play slow jams playlist.


This recap of Mr. Robot Season 4, Episode 4, “404 Not Found”, contains spoilers. You can check out our thoughts on the previous episode by clicking these words.

Poor Tyrell. I’m surprised to hear myself saying that, but for a character who has been with the show from day one, it’s hard not to care about his death. Sure, the show could very easily bring him back (maybe that light he saw somehow revived him, or was part of Whiterose’s plant). But in line with the emotional journey of Mr. Robot Season 4, Episode 4, it makes sense that Tyrell is gone.

The first season of the show pitched him as an Elliot double: the other side of the coin, working for the wrong goals. And his way of coping with his actions and the world around him was cast as a dark mirror to Elliot’s own addictions (Tyrell’s involved harm to others, rather than himself). When, at the end of the first season, Tyrell and Elliot seemed to be moving to the same side, it didn’t quite fit with Tyrell’s past abusive behavior. His actions acted as a commentary on how the rich and powerful subsist on the maltreatment of others, but all that was swept aside for the sake of playing with the audience’s expectations (the show’s greatest weakness is often its desire to prioritize twists over character).

What made Tyrell interesting became frustrating as he barely appeared in the second season. His return in the finale relied so much on pulling the rug out from under the audience’s feet that it was hard to become invested in Tyrell’s character. Even with the loss of his wife, Tyrell’s narrative was passed over in favor of twisty storytelling.

“404 Not Found” works to right some of those wrongs by presenting a straightforward narrative that puts emotion and character over plot. Very little happens narrative-wise, but it succeeds in raising the emotional stakes for the season. The episode is divided into distinct A, B, and C plots, each containing an emotional realization for Tyrell & Elliot, Darlene, and Dom. Nothing happens with Whiterose or Price, and Elliot and Darlene are no closer to hacking Cyprus bank. They do, however, work towards a realization of each other — of the importance of reaching out to other people.

The A-story continues where the previous episode left off. Tyrell’s stupidity in blurting out his collaboration with Elliot is matched by the Dark Army’s plan to send a single person to listen in to their conversation. Tyrell knocks him out, and they take the van to the middle of nowhere to destroy the evidence. They stop at a gas station, where it turns out that the guy Tyrell hit was less dead than they thought. He takes off with the van stranding Tyrell and Elliot (and Mr. Robot) in the middle of nowhere, with (for some reason) no cell service. There is a shortcut to the nearest town, say the lady at the gas station, through the woods.

All this is a contrived way of having Tyrell and Elliot (and Mr. Robot) be alone together with an uncertain future. The van driver will surely report his findings to the Dark Army; Tyrell utters, “Wherever we’re walking towards it ends with death.” Mr. Robot utters the usual existential platitude; “You search and you find, all is well. What happens when you don’t find it. Then what?”.

What makes this material work is it forces Elliot and Tyrell to interact in a way they have never before. Tyrell asks Elliot about his hoodie, why he likes the repetition and anonymity. Tyrell desires Elliot’s anonymity; he is not driven by the need for approval. Elliot responds that he doesn’t even know why he wears it anymore, he doesn’t care.

As they get further and further into the woods, Tyrell loses hope. Mr. Robot combats his earlier saying with the realization that “we never think much about the lost — whoever is unable to be found.” Tyrell has no desire to move on. His death is inevitable. Elliot leaves him in the woods, driven by the desire to warn Darlene before the Dark Army comes for her too. 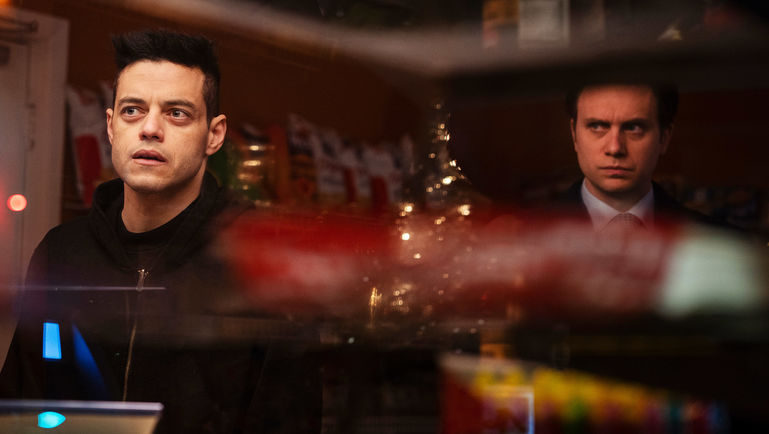 If only Darlene knew how much Elliot cared. As anyone with hard-to-reach friends or relatives can attest, it is painful, often scary when that one person is not responding. Darlene is mad. Her voicemail initially leads with a hiccup in the plan to hack Cyprus Bank, but, like “404 Not Found” itself, veers into more emotional territory. Worried he is dead, she attempts to steal a car. Turns out that the car belongs to a heavily inebriated Santa Claus (it is Christmas Eve after all). Darlene agrees to drive him (real name, Tobias) upstate in return for use of the car. Tobias’s life is tragic, she thinks to herself, as she notices all the ways he copes with the pain — drinking, and opioids, for starters. “Goodbye is short and final”, he tells Darlene, as, like Tyrell, it looks like his end is near.

But Darlene has it all wrong. When he talked about his wife’s “accident”, he meant a back injury, not death. The drugs are for said injury, and the drinking is a post-Santa dressing tradition. That thing he said about “goodbye”, that was a Steinbeck quote. Darlene is so wrapped up in the tragedy of her life she can’t help but impose the same fatalistic trappings on everyone she meets. She has lost so much, and the thought of losing Elliot is too much. Their fight against the Dark Army has turned their lives into hell; it’s hard to imagine a life outside of that. To cap it all off, Tobias realizes that the car she has been driving isn’t even his. He returns to tell Darlene one more thing: “I know you’re worried about your brother, but you have to worry about you too.”

Dom likewise is struggling to escape the sense of doom enclosing around her. She chats with a stranger online and quickly turns to sexting. When she reveals her sexual preference, the stranger reveals themselves to be female. They meet up, and for a moment everything seems to be going well. She is taking control of her life, and allowing herself to be intimate with another person.

But nothing can go well when you are in the grasp of an all-powerful force. The stranger is actually Dark Army (Dom sure is having a hard time finding dates who AREN’T a member). She tells Dom, “you’ll never be free”. The Dark Army will always be there. Dom wakes up to find herself still on the computer. The encounter was just a dream. Her fantasies of control and intimacy turn out to be just that. Fantasies. Meanwhile, she has missed texts from her mother.

Dom’s dream shows her inability to adjust to life in the wake of last season. She is unable to reach out to other people for fear that they are in league with the DA. Mr. Robot Season 4, Episode 4 reinforces that whatever happens with Whiterose, even if Elliot succeeds, the protagonists will never be able to live a normal life. For everyone they talk to, there will always be the fear gnawing away, that this person is not your friend. But the only way to break out of that fear, “404 Not Found” argues, is to reach out and make that connection.

Doing so is what convinces Elliot to lead Tyrell out of the woods. “I think you’re the only person who actually likes me,” Elliot tells him, as he reaches out his hand. In doing so, he breaks the cycle of isolation that plagues the show’s protagonists and is built into the very nature of their quest to take down Whiterose. Elliot does it for Darlene — if he can’t survive, he can at least give his sister a chance.

But their fates are not yet written. They find the van crashed into the side of the road. The driver tries to shoot them, before shooting himself. But Tyrell has already been hit. Bleeding out, he tells Elliot, “I’m just gonna go for a walk”. With that, he wanders back into the woods, where he is drawn to a purple light. Is this hell? Or some machine? How will this factor into ECorp’s plan? And Elliot’s?