“Hunt on Celsor 3” hones in on the desperation of the Colossus’s situation and the needs of its citizens, paying off a couple of earlier episodes in the season.

“Hunt on Celsor 3” hones in on the desperation of the Colossus’s situation and the needs of its citizens, paying off a couple of earlier episodes in the season.


This recap of Star Wars Resistance Season 2, Episode 4, “Hunt on Celsor 3”, contains spoilers. You can check out our thoughts on the previous episode by clicking these words.

Since it began, the second season of Star Wars Resistance has told us that the Colossus is in a terrible position. It’s floating in space. Half of it doesn’t work, and the other half is starving. There’s barely any fuel, supplies, or food, and various competing factions — not to mention the regular citizenry — are all vying for at least attention and, potentially, leadership. “Hunt on Celsor 3”, while a self-contained episode that doesn’t do much for the overarching narrative or the broader canon as a whole, was the best episode so far when it came to putting across the idea that the Colossus and its denizens are in a seriously imperiled position.

It starts with Aunt Z (Tovah Feldshuh), who loves the station but hates the fact that she can’t operate her business without food to serve. She’s on the verge of leaving and taking her chances, and so, apparently, is Neeku (Josh Brener). Loyalty and attachment to the Colossus are starting to be overpowered by the basic need to survive.

The solution that presents itself in Star Wars Resistance Season 2, Episode 4 is the giant flying stingray alien — tell me what it’s called, lore obsessives! — from the previous episode. Turns out that thing’s edible. And who better to hunt it than Captain Kragan (Gary Anthony Williams) and his pirates and his awesome-looking galleon — that’s according to him, anyway, and it’s as good a way as any to undermine Captain Doza’s (Jason Hightower) stern leadership. But if you’re on a ship marooned in space, lack of faith in the leadership is the opposite of what you need, so Kaz (Christopher Sean) and Torra (Myrna Velasco) set out to capture the beast instead. 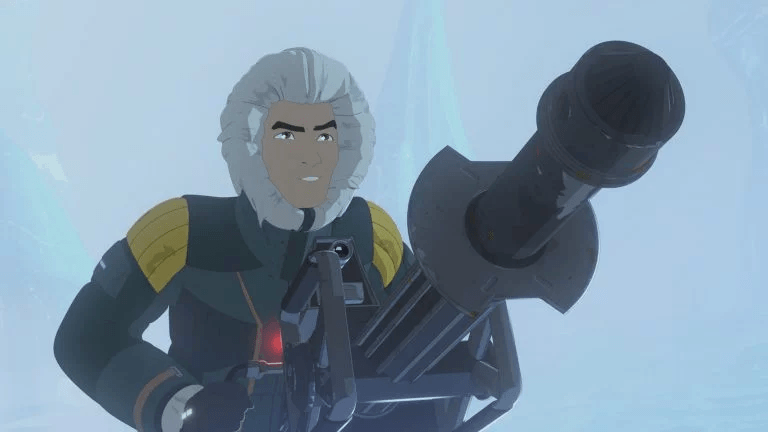 Captain Doza has the most interesting dilemma in “Hunt on Celsor 3”, torn between allowing his people to make their own decisions and the knowledge that if they do so they’ll likely get themselves killed. Kragan makes a good sort-of antagonist with an understandable viewpoint, and it helps Synara’s (Nazneen Contractor) character to rein him in when his ambition threatens their safety. Kaz and Torra are doing the “right” thing, the “heroic” thing, but it’s made a bit less two-dimensional by Torra desperately wanting to reassure the crew of her father’s competency. Aunt Z’s viewpoint is the most noteworthy since she’s really just a peripheral character, but her grievances are given real weight and while the solution is explicitly a short term one, every rallying together as a community to help out their own should go a long way in quelling the dissent.

It’s the third act that lets Star Wars Resistance Season 2, Episode 4 down, devolving into a lot of the slapstick cute-critter theatrics that have prohibited this show from rising to the same level as The Clone Wars and Rebels, even if those shows had their share of the stuff too. After a couple of relatively straight episodes, everything involving Buggles in “Hunt on Celsor 3” just feels annoyingly juvenile, especially when the show was just beginning to capitalize on weightier, more complex themes and storytelling choices.

Still, that’s the third act. The rest of the episode was Star Wars Resistance finding a nice second-season groove, though you have to wonder how much time there is spare for episodes like this in a truncated final season. Nevertheless, there were enough payoffs and suggestions for the short-term future of the Colossus for this to feel like a worthwhile diversion, and I’m sure those who got to eat as a result of it would agree.