With Halloween upon us, you may be inundated with lists and rankings for creepy or terrifying horrors to get you into the spirit of the season. This list on the other hand is for those movies that weren’t meant to terrify, are not spooky in nature and do not involve a Halloween theme. This list is for all those who sat down one day to watch a ‘family-friendly’ movie and ended up being mildly disturbed instead. Whether it be due to production design or heartbreaking scenes, these movies left many a viewer with a sour taste and a bad impression. The following movies are my personal top 10 surprisingly scary family movies that seriously freaked me out as a child, take a look and see if any of the following would make your own top ten list.

Warning, there may be spoilers! 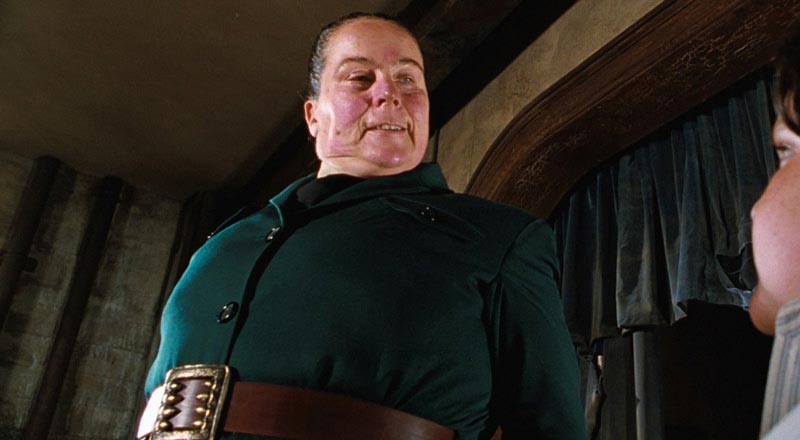 Matilda, a classic movie about a young girl clearly born into the wrong family, a story of how an intelligent, confident girl overcomes adversity to find her place in the world. A nice story, right? Until you meet Ms. Trunchbull, a terrifying headteacher that would scare even the toughest of adults, never mind children. Ms. Trunchbull is aggressively tough and intimidating, not to mention she literally uses torture to punish. Whether it be the dreaded ‘Chokey’ (a tight cupboard of rusty spikes ready to cure bad behavior with a gentle introduction to Saw-like claustrophobia), or the use of force-feeding, Trunchbull (played by Pam Ferris) took strict to a whole new level. Although a children’s movie at heart, these scenes and many more (let’s not talk about the doll situation) made Matilda a worthy mention on my list of freaky movies.

Small Soldiers is a movie about toys that were built with military-grade technology in order to give them the ability to talk. Unfortunately, the toy company underestimated the tech, causing the toys to think for themselves, leading to an all-out figurine war. The Commando Elite featured a military set of personnel equipped with flame throwers, attitude, and guns galore. These aggressive little maniacs were consistently unsettling in their thirst for destruction. On the other hand, the ‘good’ guys, the Gorgonites, were kind and sought to protect those in need. Unfortunately, no matter which side you support, audiences cannot deny that the way these battling toys move and scurry is frigid, unnerving and downright creepy. Small Soldiers is certainly no Toy Story; this movie earned its place by leaving children around the world paranoid that their toys may come to life and turn to the dark side.

Return to Oz is a nod to the original Wizard of Oz but this time tells the story of Dorothy as she is saved from the claws of electrotherapy, used to treat her delusions of a place called Oz. Where to start with this one? Return to Oz is disturbing for many a reason, including but not restricted to the servants that traveled on all floors by wheels, the room of decapitated heads or the puppets whose expressions jump without transition. Whatever the reason this one belongs on the list for being downright creepy. Although not intended as a direct sequel to the original movie, it was marketed by Disney for children, but this is nothing like the lovely land of Oz we’ve come to know. Return to Oz is certainly more suitable for cult fans and those interested in the original source material.

Jumanji, the well-loved cult classic, tells the story of Alan and his adventure with the game Jumanji, a game that tests your will to survive and will only reset once it has been finished. At first, I wondered if Jumanji really deserved a place on this list but then I remembered the spiders, the uncanny monkeys, the grabbing vines and the stalking crocodile and felt comfortably re-assured. Jumanji is one of those movies that stuck with me as a great adventure but also had me suspicious of board games, vines and rumbling noises (how could we forget the stampede?). In the end, I’m not sure a time would come where I wouldn’t hear the rhythmic beating of drums and feel a shiver down my spine and so rightfully, Jumanji earned its place on my list.

Labyrinth, a tale of spectacle and extravagance, one of regret and danger. Labyrinth follows the adventure of teen Sarah, as she goes on a quest to rescue her brother from the grasps of the goblin king. Seeking to redeem herself after wishing her brother away in the first place, Sarah must solve the labyrinth and navigate the chaos to bring her brother home. Labyrinth leaves its disconcerting mark through the ominous atmosphere, creepy puppets and frightening scenes that are the stuff of nightmares. Let’s start with the disturbing wall of hands that grab and twist as Sarah falls and then move on to the claustrophobic turmoil of the upside-down room. Let’s be honest even the tantalizing stare of Bowie in his Goblin King clad, with his insistent desire to taunt and ridicule, was enough to put Labyrinth on my list of unnerving films.

Willy Wonka & the Chocolate Factory, a not so ‘sweet’ movie about a lonely, eccentric screwball who invites 5 children to tour his factory in order to find a fitting successor to his assets. Let’s be fair Willy Wonka & the Chocolate Factory isn’t too bad for children, but one scene, in particular, has awarded this movie a confident spot on my top 10. When Willy Wonka asks the children (well, most of them) and their family members to board a seemingly innocent boat, no one could have guessed what was to follow. Scenes of creatures and bugs crawling over people’s faces, images of a chicken being decapitated alongside Gene Wilder’s unnerving and bewildering speech, all work to destroy any trust we had in the whimsical film. As an adult I can appreciate the fact that Wonker was out to test his candidates, to see how much they would tolerate in order to stay in his good fortunes. As a child, on the other hand, I would skip this scene or close my eye every time, because I did not pick up the nuances, I was simply scared and ridiculously confused.

The Adventures of Pinocchio, a live-action adaption of the much-loved classic, telling the story of a naïve Pinocchio, who must learn to be honest and good to become a real boy. At this point in the list, I’m starting to think I don’t have a problem with the narrative here but a problem with puppets. As far as the story goes, The Adventures of Pinocchio doesn’t stray too far from the classic Disney movie and yet this version feels so much more sinister. Pinocchio’s design, style, and movement petrified me as a child, his wide eyes and stiff expressions felt as though they stared right through me and not at me. Not to mention production design went to town creating horrifying decorations that adorned the Fairground and special effects took it a new level with the terrifying disfigurations from boys to donkeys. This movie has a way of making the innocent seem malevolent and the charming becomes unsettling, that is why has been awarded a spot on my top 10 list.

The Neverending Story tells the story of Bastian, a young boy who lives a dismal life as he is plagued by consistent taunting from bullies. After finding refuge in an old book shop Bastian begins reading an old book and quite literally becomes part of the story. The Neverending Story is beautiful, enchanting and otherworldly, a perfect example of a children’s fantasy movie, so why, you may ask, does it belong on this list? Well, I’m not sure there is anyone that has watched Neverending Story as a child who was not mildly traumatized by the near-death experience of Atreyu’s horse, Artax. It all goes down when Atreyu and Artax try to pass through the Swamp of Sadness, Atreyu is protected by a magic pendant… Artax, on the other hand, is not. All too quickly the sadness of the swamp overcomes Artax and he allows the swamp to take him. Watching and hearing the despair on Atreyu’s face as he pulls on Artax’s reigns, trying to stop his friend from sinking further, is honestly too distressing. As a child (and even now) the scene brings tears to my ears at the thought of Artax quite literally allowing sadness and the swamp to consume him. This harrowing scene is exactly why it deserves a place on this top 10 list.

Who Framed Roger Rabbit may not exactly be aimed at children but it certainly ended up in front of many youthful eyes. The cartoon characters and playful marketing helped put Who Framed Roger Rabbit in front of potentially young audiences (including myself) who were not quite equipped for the mature content that lay before them. This movie is deceptively provocative, full of violence and cheeky innuendo as cartoon characters are depicted as naughty adults in the world of movie entertainment. With this in mind, we can assume there will be inappropriate comedy throughout but mostly it would go straight over children’s heads. The problem is not the smoking, the guns or even the sexualization, the scariest part of the movie is when a live-action character is melted alive with acid. The character’s eyes literally leave his head, writhing around in different directions, all whilst his flesh is turning into hot green goop as his sinks into the acid. This scene alone is exactly why it has made it to second place of this top 10 list.

Watership Down is a movie that somehow still consistently makes its way to the TV screens of thousands of viewers during Easter. Nothing quite says pleasant Easter season like the mutilation and death of bunny rabbits. Watership Down is clearly intended for mature audiences, as a great adaptation of the original novel, Watership Down is a masterpiece that approaches very serious topics. Yet still I know myself and many people my age were subjected to this movie as children and were left startled and frightened by the blood and violence between the creatures. Watership Down had to be the top of my list with nearly everyone I spoke to agreeing that this movie would hold a place on their lists too.

Did you agree with the choices on my list? Or do you have other movies that come to mind when thinking about unnerving childhood movies? Whatever your answer, let us know in the comments!