Interview: Riley Stearns, the Music-Loving Director of The Art of Self-Defense

Riley Stearns’ The Art of Self-Defense shook me. The trailers were unassuming, and at first, didn’t particularly interest me. It looked like another indie comedy-drama with Jesse Eisenberg, an actor who I’m starting to like more and more this decade. I’ve never really been a fan of karate, either.

A spur of the moment ticket purchase and a couple of hours later, my jaw finally popped back into place. The unexpected and twisted nature of the story left me thinking seriously about my own masculinity. The film fascinated me, and the brutality of it all left a gaping amount of questions.

Some of those questions were finally answered, as writer-director Riley Stearns, a filmmaker I’ve admired since his debut with Faults in 2014, gave me a bit of his time. We started as any interview goes: talking about our favorite movies as kids.

“It’s funny. I feel like every single director, they all started out as a young person making super 8 movies,” said Stearns. More than likely, I watched more movies as a kid than Stearns, now more established with his sophomore feature. “Movies were never really my interest. I wanted to play bass in a band.”

Stearns’ road into filmmaking doesn’t follow the traditional path. He loved music, not movies. He loved new metal in middle school, post-rock in high school, and any bands that had a bassist as a frontman. He started appreciating film around age 18, due to his girlfriend and now ex-wife, Mary Elizabeth Winstead.

He didn’t even get into film school, which he applied to after his freshman year at the University of Texas at Austin. He hadn’t made any films yet. He just had nothing to show them, no previous work, no track record.

As with any good story, he took the $1,600 in his bank account and moved to Los Angeles before he was 20. It’s funny to hear this story from a filmmaker I admire. I know dozens of aspiring filmmakers that are convinced they need this specific thing to happen, this specific university program, this specific degree, or this specific connection. Sometimes, you just need to take a risk.

After finding his way into a writers’ room, he took any assistant job that came his way. “I understood how a writers’ room worked, how stories were broken. I knew at that point that I wanted to become a director,” said Stearns.

Though pursuing film was one reason for the movie, he was also in a long-distance relationship and simply wanted to be in the same city as a person he cared about.

I’d like to point something out. Stearns laughed a lot during our conversation. He was warm and friendly. We didn’t need to talk about The Art of Self-Defense for this to be a productive or meaningful conversation. He’s someone you want to get a beer with.

Once he was in writers’ rooms and getting different assistant jobs, he started to write. Constantly write.

“I always was writing and those early scripts were so horrible. I wrote maybe 6 scripts before Faults,” joked Stearns. “They were all so bad. Every single one of those scripts taught me something about myself as a writer.” He had rip-off scripts from everyone, taking bits and pieces of Wes Anderson, Martin Scorcese, Paul Thomas Anderson, and other big-name writers.

When asked about these early scripts, Stearns had the perfect response. “They exist and no one will ever read them.”

It was an easygoing conversation, and I kept forgetting to ask about The Art of Self-Defense. It was interesting just to talk with a filmmaker who didn’t seem obsessed with movies. For many film lovers, myself included, we think of certain filmmakers like superheroes, people that are a different breed entirely. Stearns was the opposite of that.

The best parts of our conversation revolved around music. He talked about music with an extra passion. He discussed music like any other music fan, excited to share his favorites and learn about yours. He still enjoys movies, but that’s far from his only interest. 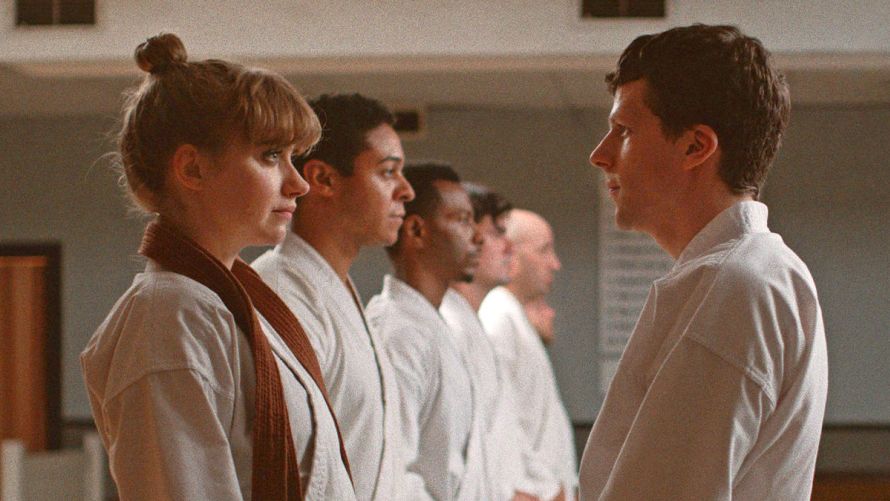 “I don’t need to watch two movies a day,” said Stearns. “I have other passions in life. It’s great to find inspiration in other things.”

Once we finally circled back to his 2019 film, some interesting nuggets were uncovered.

“Initially, we were looking at casting someone in their 40s. Dudes that age just didn’t get it [though],” said Steans. “I got a few responses from people. ‘I just can’t play a weak character. I just don’t want to play a weak character right now.’” Once they made the lead character in his mid-30s, they sent it over to Eisenberg, who immediately understood the part and was locked in.

They had a tight window; Eisenberg is in high demand. They had 25 days to film, or five weeks.

“For an indie film, the fact that we were able to get it done, the crew came prepared. I had all the best people in the positions that all needed to be there,” said Stearns. “We found a way.”

When you watch The Art of Self-Defense with that knowledge in mind, it becomes a much larger achievement.

Instead of asking about Marvel, I asked Stearns about the state of indie filmmaking, and where he thought it was heading. He had some doubts.

“I think there’s always going to be indie films being made,” said Stearns. “There’s no real in-between stage anymore [though]… the stepping stones to get those bigger movies aren’t there anymore.” He continued further, though.

“We’re missing out on filmmakers’ formative films. They’re going from first feature to a Marvel movie.”

It’s an interesting dilemma and a question that has no clear answer. Up-and-coming filmmakers will have big choices to make in terms of sophomore efforts. They can continue to have small budget work or go for broke, possibly biting off more than they can chew. Indie filmmaking is far from dead, but it is just different than it was 10 and 20 years ago. The industry continues to change.

After giving praise to Rian Johnson and Kelly Reichardt, two established and widely beloved filmmakers, Stearns explained that he is going to continue progressively making bigger films. He’s never making something that’s out of his depth. He wants to be careful, measured, precise.

Riley Stearns is certainly still an independent filmmaker trying to figure it all out. His story is an example of the road less traveled, and a testament to the philosophy of just making things work.

I, for one, am fascinated to see what he does next.

The Art of Self-Defense is available in the UK for digital download on November 4th.