“The Engineer” was a character-driven episode focused on Neeku that found some welcome layers of complexity that the show needs more of.

“The Engineer” was a character-driven episode focused on Neeku that found some welcome layers of complexity that the show needs more of.


This recap of Star Wars Resistance Season 2, Episode 5, “The Engineer”, contains spoilers. You can check out our thoughts on the previous episode by clicking these words.

A more mature episode of Star Wars Resistance, “The Engineer” focuses on Neeku (Josh Brener), the green-skinned walnut-headed comic-relief sidekick who you wouldn’t necessarily associate with maturity — which is half the point, obviously. Neeku might be the show’s main source of gags — ill-advised physical slapstick notwithstanding — but he’s also a well-developed and endearing supporting character. Star Wars Resistance Season 2, Episode 5 leverages the audiences’ sympathy for him by having him trust and be betrayed; having his simplistic worldview be challenged by the harsher reality that the Colossus finds itself in now it’s floating idly in space and falling to bits.

Sarah Carbiener and Erica Rosbe, the episode’s writers, use the current tumbledown state of the Colossus to slyly tell a more character-driven story. Neeku and Kaz (Christopher Sean) are struggling to repair the control room when they happen on a distress call from a stranded shuttle containing Nena (Meghan Falcone), the survivor of a recent First Order attack and a capable engineer who agrees to help fix the Colossus in exchange for repairs on her own shuttle. She’s helpful and pleasant, takes an immediate liking to Neeku, whom she bonds with throughout the episode, and is wary of Kragan (Gary Anthony Williams) and his pirates for reasons that are explained later — she was trafficked into slavery under the Hutts. 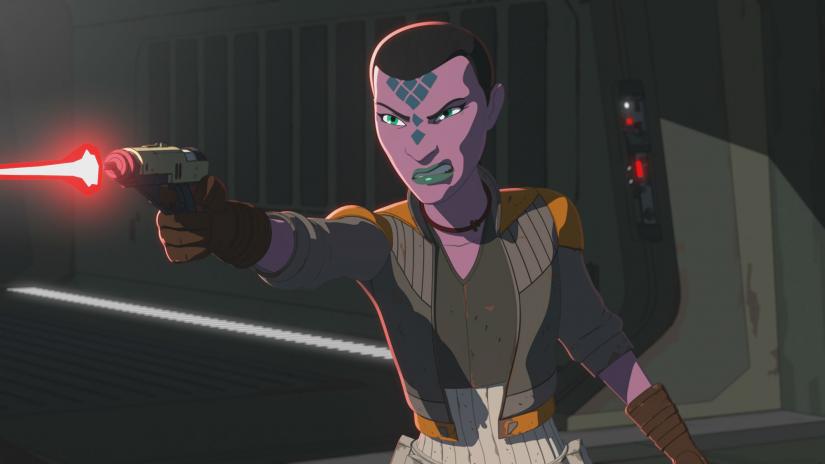 She’s also a First Order saboteur. This becomes apparent about halfway through “The Engineer”, and the rest of the episode is spent dealing with the fallout of the revelation, with Neeku particularly devastated and Kaz guilty about having to be the one who broke the news to him. This is a by-the-numbers plot that would have been better served by multiple episodes rather than being crammed entirely into this one, but “The Engineer” does an admirable job of allowing a genuine connection to form between Nena and Neeku. The former has lived a harsh life and has embraced the inevitability of a First Order victory, rather than their ideology; she’s a pragmatist, driven to pitch in with the winning side as a survival mechanism. Neeku, as we learn, has had a relatively mundane life, and fulfills a relatively mundane role aboard the Colossus, so he has a kind of out-of-the-box morality that hasn’t been corrupted by gross mistreatment or desperation. He sees things as he believes they should be, and can’t fathom why a smart and pleasant person like Nena would betray him — this, obviously, makes the betrayal sting all the more.

It’s also surprisingly layered characterization, which Star Wars Resistance could always use more of. Even though Nena sabotages the Colossus and leaves it stranded for a First Order attack, you can’t help but feel sympathetic towards her. When Agent Tierny (Sumalee Montano) suggests she’ll be executed when the First Order next encounter her, there’s a hint that we’ll see her again, on the right side of the fight. The show obviously recognizes Neeku’s naive optimism as worth preserving and mirrors it at that moment, letting us believe that while Nena wasn’t talked into staying aboard the Colossus this time, she will be once she realizes that winning can’t always come at the expense of what’s right.