This review of The Sandman Universe Presents: Hellblazer #1 contains some minor spoilers.

DC is rolling out the Black Label brand like there is no tomorrow, and what seemed to start as a prestige format using comic legends now seems to be any title where they can use the C-word.

Hellblazer #1 opens in epic style, as we find ourselves smack bang in the middle of what looks like the final issue of an ongoing storyline. There is chaos everywhere as demons have invaded our realm causing the end of the world. The sun has been eaten, a giant black spiky thing is floating in the sky, angels are attacking as John uses best mate Chas for one final power play with fatal consequences. Business as usual really, and it comes across as parody for the tropes that the series has previously used.

However, Spurrier is, of course, setting the stage for a more elaborate plot. A story that plays with unreliable narrators, and unreliable characters, and as the extra-sized story unfolds, we don’t know where we are, when we are, and who to trust.

As far as first issues go, it must have been a difficult pitch to arrive at. Many fans stopped reading Hellblazer at issue #300 when they canceled the series so they could relaunch it for the unfortunate mess of The New 52. John never belonged in the DC Universe. Of course, he originally existed in it — we see him in Crisis On Infinite Earths for crying out loud — but only in the hands of the people behind the character could such a mash-up truly work. 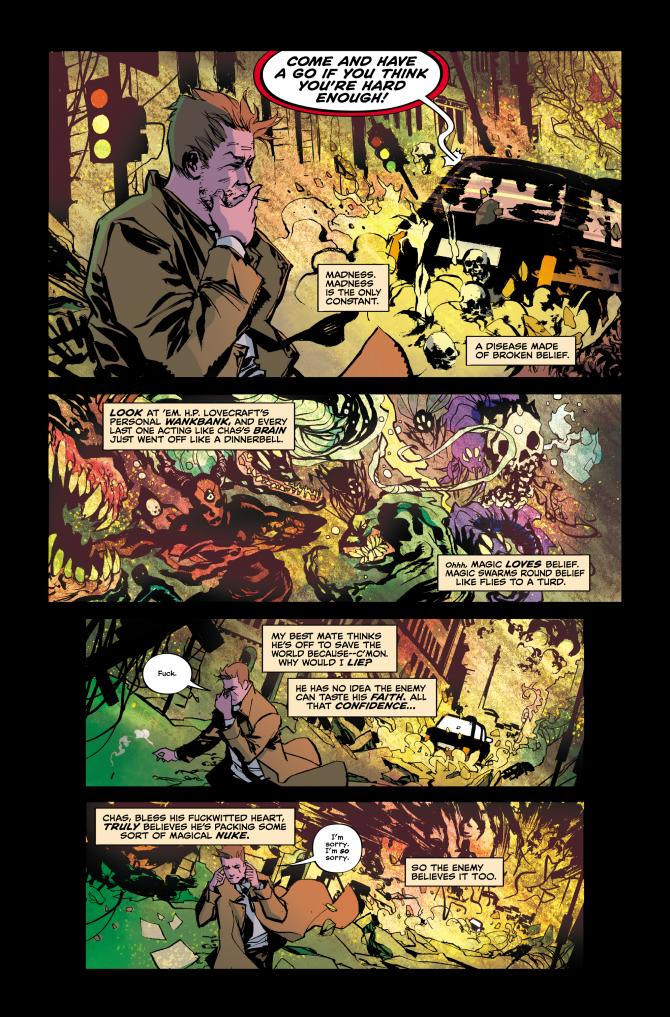 When Alan Moore created him for his run on  Swamp Thing and teamed him up with the other DC supernatural heroes, he understood that it would only work if everyone in the cast were on the same page. So hokey old characters such as Deadman and Zatanna became just as relevant as he was, however, putting John in Justice League just doesn’t work.

So, at last, it would seem that the decision has been made to place John back, roughly, where he belongs: under the guidance of Neil Gaiman, in The Sandman Universe.

Where The Sandman Universe Presents: Hellblazer will go is an intriguing premise at this point. Hellblazer #1 is almost a love letter to the Constantine we once knew, and Spurrier takes a greatest hits style approach in the storytelling. Art wise, Takara uses a scratchy grainy line, and there are moments when the faces look slightly off as if he was struggling with consistency. John’s new haircut is distracting, but his demons and ghosts all look strangely retro, reminding me of Will Simpson’s early art on the title decades earlier. There are many panels towards the end of the book where no backgrounds are used at all, making me wonder if the deadline was looming over getting this book out in time and there’s a moment where the uniquely British insult “k******d” is spelled wrong — yeah I know, nitpicking. However, the premise is solid and the story intriguing enough to make me want to return for a second issue, so all in all this is a recommend for fans of the character.

Now if only we could get another stab at a movie or TV series, maybe The Sandman Universe Presents: Hellblazer #1 will help that happen.