The arrival of Elijah’s mistress in “Need to Know” proves the perfect setup for a typical episode of Bluff City Law.

The arrival of Elijah’s mistress in “Need to Know” proves the perfect setup for a typical episode of Bluff City Law.


This recap of Bluff City Law Season 1, Episode 8, “Need to Know”, contains spoilers. You can check out our thoughts on the previous episode by clicking these words.

Ladies and gentlemen, meet Virginia Howe (Eisa Davis). She’s a decorated general in the U.S. Army and the mother of Strait & Associates intern Emerson (Stony Blyden), which means she’s also the former mistress of Elijah Strait (Jimmy Smits). Uh-oh! And she, predictably, has a problem that only her former lover can help her with — some faulty GPS equipment is leading to the deaths of American servicemen, and the Army is covering it up. Double uh-oh! The Department of Defense itself seems a rather outlandish target for even the do-gooder familial heroes of this show, but you’ll be pleased and not at all surprised to hear that by the end of Bluff City Law Episode 8 they’ve been cowed by the sheer moral integrity of the Strait family — and, you know, another general’s obvious conflict of interest share in the company supplying the faulty tech.

This entire narrative, which occupies most of “Need to Know”, is quite clearly a convenient excuse for Sydney (Caitlin McGee) to do some more moaning, though I suppose having to play nice with the woman her father betrayed her beloved mother for is a decent justification. And where would Bluff City Law be without various meaningful heart-to-hearts that have nothing at all to do with the case of the week? There are loads in “Need to Know”, between Elijah and Virginia and Elijah and Sydney and Sydney and Virginia, none of them particularly surprising or interesting, but no matter — the case itself, with its rote developments and typically upbeat ending, wasn’t all that surprising or interesting either. 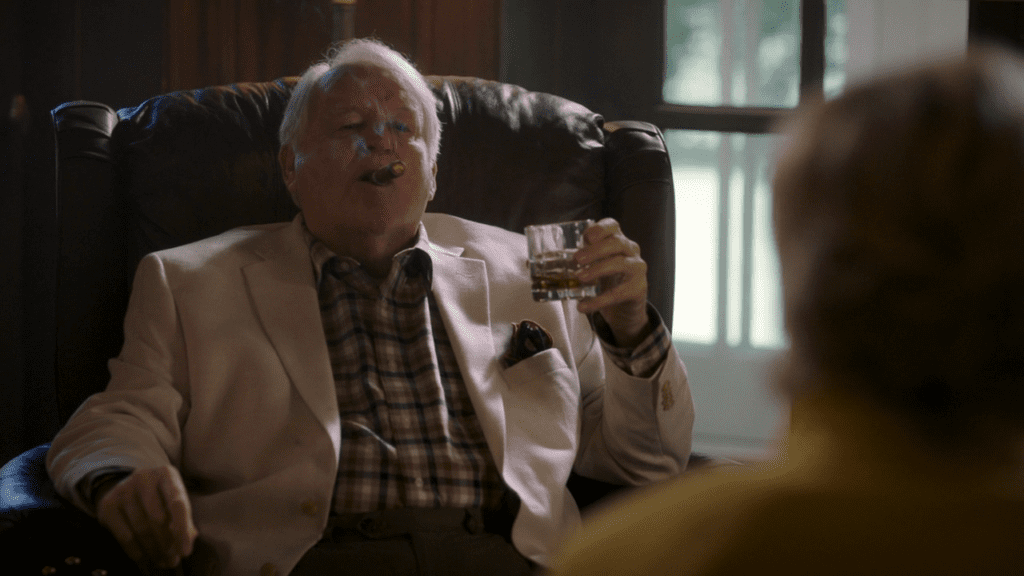 Elsewhere in Bluff City Law Episode 8, Della (Jayne Atkinson) is approached by her son Eric (Daniel Reece) for help with her father (Dakin Matthews), a cartoonish and prejudiced cigar-smoking autocrat who wants to fire Eric and sell the family liquor business because he can’t stand the newfangled modern direction his grandson is taking it in — goodness me, could that be a metaphor for Old Guard traditionalist conservative attitudes rapidly waning in the face of liberalism? Well, he has a black servant and moans about his daughter being a queer, so I think it might be! You can always rely on this show for subtlety.

We even get a brief development in the on-going George Bell (Scott Shepherd) case, which I’m sure everyone was excited about, as Jake (Barry Sloane) and Briana (MaameYaa Boafo) dig into online ancestry DNA testing to determine who the real killer was. “Need to Know” certainly seemed to think this revelation was thrilling, bringing the entire episode to an end with Jake letting Robbie (Josh Kelly) know that they’ve figured the whole thing out, as though this was some kind of wild cliffhanger ending. You can’t fault Bluff City Law Season 1, Episode 8 for effort. You can just fault it for virtually everything else.