Dex crosses a personal line for the wrong reasons in “November Surprise”, and has to fix her own mistake before it’s too late. Meanwhile, Thanksgiving looms large.

Dex crosses a personal line for the wrong reasons in “November Surprise”, and has to fix her own mistake before it’s too late. Meanwhile, Thanksgiving looms large.


This recap of Stumptown Season 1, Episode 7, “November Surprise”, contains spoilers. You can check out our thoughts on the previous episode by clicking these words.

Stumptown is the best show of its kind currently airing — best characters, best dialogue, best morally complex case-of-the-week plots, best on-going relationship arcs, and so on, and so forth. Stumptown Episode 7 proved that capably, in an hour that tested Dex (Cobie Smulders) and how far she’s willing to go, but didn’t trouble the show’s well-oiled crime drama machinery. That effortlessness is what makes the show so impressive and intriguing; when it’s firing on all cylinders, quite how good might it get?

But that’s for later. In “November Surprise”, Dex finds herself embroiled in local politics, hired by the campaign manager of Llewelyn Slocombe (Mark Sivertsen) to prop up his State Senate bid by ruining his squeaky-clean opponent, Dan Gibson (Paul Fitzgerald). Gibson is married to his campaign manager Antony (Tosin Morohunfola) and has an inclusive mantra and all kinds of well-meaning political ideas, but Dex reasons that politicians are all the same — and she’s getting paid a lot of money to dig up dirt.

Grey (Jake Johnson) and Ansel (Cole Sibus) aren’t happy with her choice of assignment: “You’ll make everyone hate him!” bemoans the latter. “I’m sure deep down he’s a monster like everyone else” is Dex’s only retort, but is she right? We’ll see.

Gibson certainly has his secrets. Dex goes undercover in “November Surprise” at his campaign office where she’s left to make calls under the stern supervisory eye of Carol (Kimberly Hebert Gregory), but that doesn’t give her the kind of access she needs. She instead finagles a fundraiser at the Bad Alibi, where Liz (Monica Barbaro) is now working on a trial basis. Dex still thinks she “seems a little young”. Even Hoffman (Michael Ealy) arrives to “support a good man”, and while Gibson is busy schmoozing his base, Dex breaks into his campaign office to dig up dirt, where she’s confronted by Carol, who reveals she’s also undercover on behalf of the Slocombe campaign.

An “intimate” letter to Gibson from a university professor leads Dex to the campus, where she learns that Gibson, once a teacher there, might have had an inappropriate relationship with a student — a female one, no less. Who better to work out which student than Grey, who studies old volleyball pictures to determine which team member is the hottest. Blonde hair, long legs — you know the type. He confesses to Liz that he enjoys looking into peoples’ pasts, and she asks if he looked into hers. Apparently she has her fair share of things to hide. 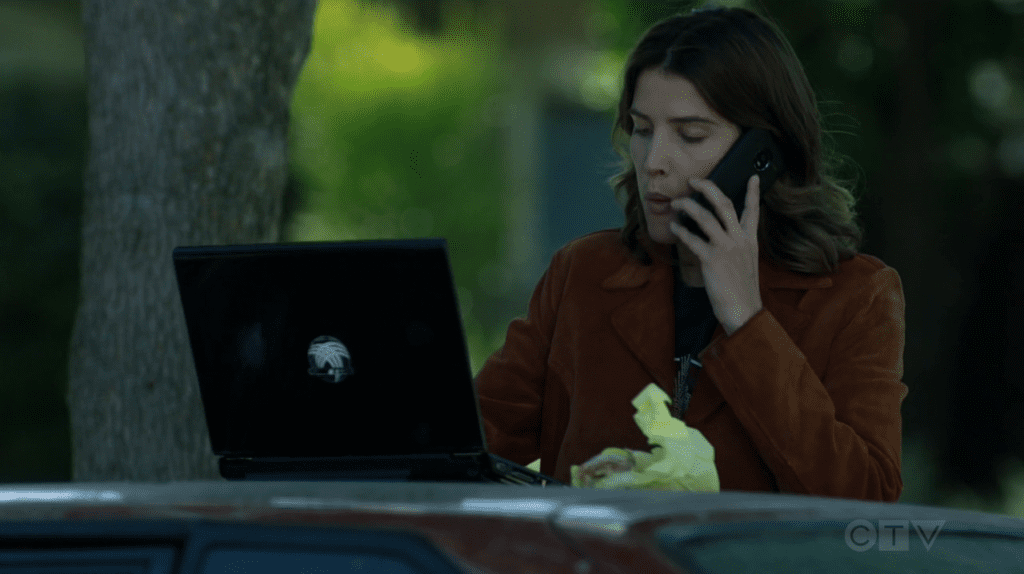 Dex goes to see the former student, Emma, who indeed had a relationship with Gibson. Her 15-year-old son, Jacob, is his. At the time, she had a boyfriend, who she allowed to believe was Jacob’s father — predictably he bolted, leaving Emma to bring up the kid with her brother, Casey, who is disgusted that Dex is trying to profit from uprooting their family. He has a point and Dex knows it; she recommends that they tell Jacob the truth either way.

Once again taking her personal frustrations out on Grey, Dex berates him for involving Liz, who later stands him up on their scheduled date. When he returns to the bar, she says they should keep things professional from now on, for obvious, Dex-related reasons. But Grey is too slick for that, and he’s able to charmingly talk his way back into her good graces.

Running shorter and shorter on options, Dex goes to see Carol and offers her the story for half of the fee, but Carol won’t touch it. “How much pain are you willing to inflict for a dollar?” she asks Dex, and reminds her that whatever she does, she’s going to have to live with herself afterward. Dex doesn’t have much time for contemplation, though, since she receives a text from Ansel reading simply “Apple”, which is their I’m-in-danger code phrase.

Returning to her apartment, she finds Slocombe’s campaign manager there. Casey, having panicked about the impending revelations, went to her directly, and she bought the story from him. Now Dex has to prevent the information from getting out.

How to do that? Well, there’s one way, which neither Gibson nor his husband is going to like. But it might be the only way to keep Jacob’s name out of the papers, and isn’t that more important? Dex organizes a parlay. Slocombe’s team agrees not to share Jacob’s name as long as Gibson agrees to drop out of the race — a contract will keep it all together. Both parties sign. And thankfully Gibson socks Slocombe in the mouth for good measure.

It might not be the ideal outcome in “November Surprise”, but it’s an outcome that protects the most innocent party, so what can you do? Stumptown Season 1, Episode 7 is even able to spare time for Thanksgiving. In attendance are Dex, Grey, and Ansel, but also Liz and Hoffman. It’s awkward. Liz is jealous of Dex and Dex might be kind of jealous of Liz, but Grey is clearly jealous of Hoffman. I suppose these are the kind of complex character dramas that are worth giving thanks for.