A Beautiful Day In The Neighborhood Second Opinion: Disturbing the Peace

I had a harder time warming up to A Beautiful Day In the Neighborhood than my frozen holiday turkey. It’s an odd piece that’s laudable, but humdrum.

I had a harder time warming up to A Beautiful Day In the Neighborhood than my frozen holiday turkey. It’s an odd piece that’s laudable, but humdrum.

Tom Hanks, even in a bad movie, can usually do no wrong in my eyes. I think everyone’s least favorite Coen Brother’s film, The Lady Killers, is a misunderstood gem. Hell, if the studios ever tried to remake Turner & Hooch, I’d start a GoFundMe campaign to buy the rights because that’s like asking someone to repaint Nighthawks with patrons sitting inside a McDonald’s; you just don’t mess with perfection. So, maybe it’s our jaded news cycle, the endless social media snark cannons (of which I’m a proud owner), or how the film is seen through a cynical reporter’s eyes that gave me a harder time warming up to the highly anticipated A Beautiful Day In the Neighborhood than my frozen holiday turkey. It’s an oddly indulgent piece that’s laudable, but humdrum.

Tom Hanks plays Mr. Rogers, the beloved children’s television star who broadcasted from one of America’s great blue-collar cities of Pittsburgh, Pennsylvania. In what amounts to a supporting role, something akin to his allotted time as Walt Disney in Saving Mr. Banks, he is interviewed by a writer for Esquire named Lloyd Vogel (played by The American’s Matthew Rhys). To call Vogel cynical doesn’t do the word justice. In fact, it may be the equivalent of calling the Pope religious. He thinks everyone is hiding something, and America’s favorite grandfather in the red sweater is no different. Vogel’s wife Andrea (This Is Us‘s Susan Kelechi) is so concerned about her husband’s dogged style that she even asks him to “not ruin my childhood.” Soon, we come to discover that there is one man who is in a personal crisis and good old Fred is there to be a friendly neighbor.

A Beautiful Day In the Neighborhood is based on the real-life relationship, and subsequent articles titled, “Can You Say… Hero?” between Rogers and journalist Tom Junod (puzzling why they simply couldn’t keep the award-winning reporter’s name). There is something about the Hanks portrayal that captures the essence of the icon of kindness, while also creating unintentional humor as the cynic in me thought of him as an unwanted house guest. He shows up or calls at the oddest times, which is really a glimpse into when being neighborly was born in another time and place. By the time Rogers shows how to take his anger and smash like a ball of clay, I could see why Junod has publicly stated how he had changed his life. It made me think how I wished I hadn’t snapped back at a rude barista before work because I needed a cold-brew, and pondered how we live in a Yelp critical world at the moment. There is really something there on how Hanks shows you the power of active listening and love has greater power than hate that begins to wash over you. 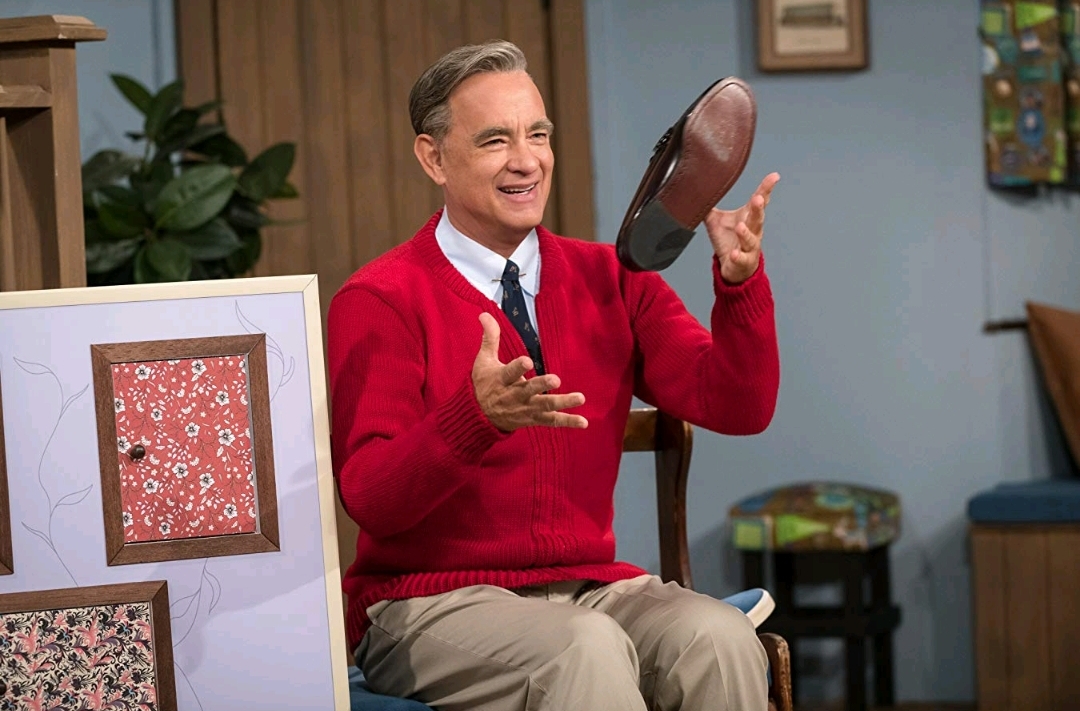 There, though, is an issue I have with A Beautiful Day in the Neighborhood; we only gather a brief and surface-level understanding of why Rogers was the man he came to be. This extraordinary ability needed to be explored and delved into more deeply, and with greater care. It’s similar to reading from a positive quotation book, but not studying up on why the man or woman came to think that way. The script from Noah Harpster and Micah Simmons-Blue focuses on Vogel’s demons, which is less interesting, if not somewhat compelling. You also have a head-scratching amount of reenactments of the show which are odd, self-indulgent, and even come across as filler, which compounds the lack of insight problems.

A Beautiful Day in the Neighborhood doesn’t hold a candle to last year’s far superior documentary on Mr. Rogers, Won’t You Be My Neighbor?. There was a film that delved deeply into race, death, war, hate, love and to embrace our differences to American children that were radically being displayed over the airwaves in the ’70s that is only addressed here with a throwaway line. You paid theatre ticket prices to see a biopic of Mr. Rogers, not of a writer named Vogel; which, in the film, is not the real-life reporter’s name the story is based on, which results in a faux biopic that leaves you unfulfilled.

Hopefully, in the years that begin to pile up and pass, a biopic will be made that will do true justice to a man who was larger than life, but never knew it. Until that day comes, you can enjoy the true inner beauty that Hanks brings to the role, the startlingly accurate look Cooper displays of a man winding down the clock, and get your fix of Mr. Rogers with YouTube clips and a copy of the documentary mentioned above.