Home » TV » His Dark Materials Recap: That Isn’t How It Happened

His Dark Materials Recap: That Isn’t How It Happened

“The Lost Boy” is His Dark Materials at its best so far, making the boldest storytelling choices and hitting the most meaningful emotional beats.

“The Lost Boy” is His Dark Materials at its best so far, making the boldest storytelling choices and hitting the most meaningful emotional beats.


This recap of His Dark Materials Season 1, Episode 5, “The Lost Boy”, contains spoilers. You can check out our thoughts on the previous episode by clicking these words.

Translating a story from one medium to another has never been an exact science – can’t be, really, since hopping the formal transom brings with it an entirely different set of rules and expectations. There are horror stories to be told of the attempts. The work of German madman Uwe Boll is a nightmarish catalog of butchered video game properties. And we all saw what happened to Game of Thrones once George R. R. Martin became too lazy to write a sequel and David Benioff and D. B. Weiss had to freestyle an ending. Our own Cole Sansom, as it happens, said in his review of the premiere of the BBC and HBO’s His Dark Materials that it was “a cautionary tale of the difficulties of adaption.”

The show, obviously adapted from Philip Pullman’s classic series of novels, has played with the timeline of its source material with regularity and varied effectiveness. His Dark Materials Episode 5 does so the most obviously, and perhaps with the most notable results, though it’s hard to argue that the made-for-TV telling, which consolidates two parallel stories both integral to the overarching narrative, isn’t wise to do so at this point. Purists will, I suspect, strongly dislike some of the alterations made by “The Lost Boy”, but I’d rather that than suffer the show degrading itself in attempting to please that finicky crowd.

We re-join Lyra (Dafne Keen) in the fabled North, gorgeously simulated by the Welsh Brecon Beacons, the rugged landscape across which Lyra is trekking with the Gyptians, charismatic aeronaut Lee Scoresby (Lin-Manuel Miranda), and the armoured bear Iorek Byrnison, an increasingly exemplary example of practical creature-building, despite some post-production digital touch-ups. They’re still guided by the harsh but reliable truthfulness of the alethiometer, which eventually steers Lyra to the missing Gyptian child Billy Costa and his terrible fate. 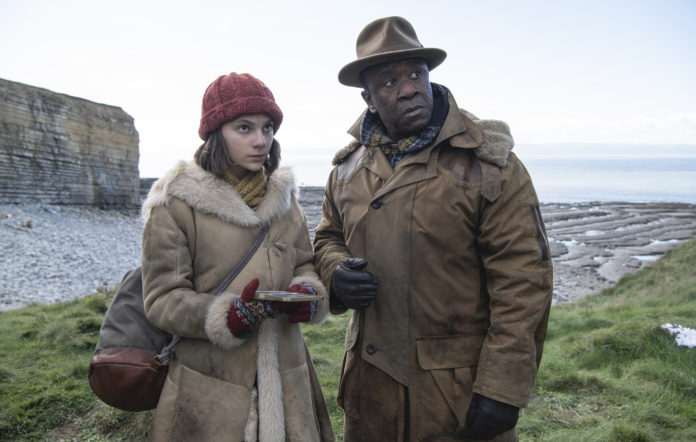 Before that, though, Lyra must convince Lord Faa (Lucian Msamati) to allow Iorek to carry her away at the device’s whims, which he’s initially reluctant to do. It’s a good thing that he acquiesces, since some of the best scenes in His Dark Materials Episode 5 are quiet ones shared between Lyra and the bear puppet she was acting against during initial shooting – though you’d never know it by the finished result.

“The Lost Boy” also finally reveals witch noble Serafina Pekkala (Ruta Gedmintas), whose daemon has functioned as an enigmatic guide through the wilderness. Farder Coram (James Cosmo), I think it’s fair to say punching somewhat above his weight, shares some backstory, which includes a relationship with Pekkala, and a child they shared and lost.

Some of this – the fate of Billy Costa, for instance – is spliced with different characters and threads from the original book but is mostly unchanged. It’s the introduction of Will Parry (Amir Wilson) which surprises since he didn’t appear until the second book in the original trilogy, The Subtle Knife. Introducing him here and having him share space with Lyra will likely prove slightly controversial for some, though I’d argue it makes perfect sense for a TV adaptation, especially after early, unsubtle nods in his direction. A standout of “The Lost Boy” is his anxious, fidgety mother Elaine (Nina Sosanya), whom Will looks after in the absence of his father. Lord Boreal (Ariyon Bakare), another earlier-than-advertised character, surveys his home and crosses between worlds using a “window”.

It’s fair to say, I think, that His Dark Materials Season 1, Episode 5 was the best yet, capitalizing on the fourth episode’s promise of more sweeping adventure, more emotional stakes, and a closer resemblance to the big-budget fantasy that this show evidently aspires to. But it was the quieter character moments – the bonding between Lyra and Iorek, the heartbreak surrounding young Billy, and that frazzled relationship of Will and Elaine, the roles of responsibility and caregiving suddenly reversed – that defined “The Lost Boy”, lending it a sense of reality that can only be built rather than bought.