“So You Need A Crew?” finds Harley in search of her own henchman, just like a real supervillain, while also addressing predatory men and gender equality in comic-book universes.

“So You Need A Crew?” finds Harley in search of her own henchman, just like a real supervillain, while also addressing predatory men and gender equality in comic-book universes.


This recap of Harley Quinn Season 1, Episode 3, “So You Need A Crew?”, contains spoilers. You can check out our thoughts on the previous episode by clicking these words.

Still committed to her solo supervillainy, Harley Quinn (Kaley Cuoco) begins “So You Need A Crew?” attempting to steal a warhead from a Russian train. But for all her efforts, she can’t prevent Joker (Alan Tudyk) from arriving with his goons and stealing her credit. Harley deduces that the only advantage he has over her is his crew, so she resolves to find her own. This is a mission that takes up all of Harley Quinn Episode 3, to typically amusing results.

Harley’s attempts to recruit a crew through an agency — that’s apparently how these things work — results in failure since nobody wants to deal with her once they learn that she isn’t with the Joker anymore. Her attempts to recruit at a local bar also result in failure; the patrons would rather jump through a literal Hell portal than join her crew. Even a low-tier villain like Kite Man (Matt Oberg) can pick up henchman easier than she can. (In a funny nod to the previous episode, Poison Ivy (Lake Bell) wants to know if he asked about her.)

Next on Harley’s agenda is a seminar conducted by Maxie Zeus (Will Sasso), who can apparently teach her how to recruit a crew. She goes backstage for some personal pointers in Harley Quinn Episode 3, and he immediately tries to sleep with her. When she rejects him he flips out in classic “scorned man in a position of power” fashion. 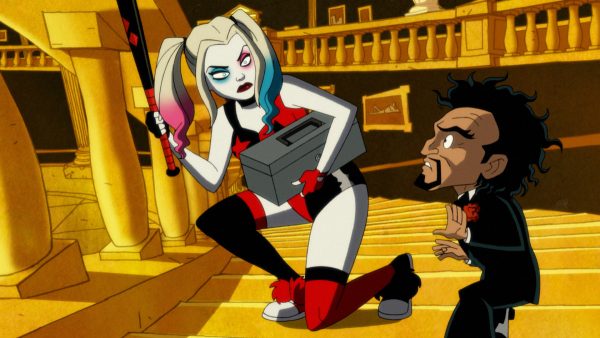 The next option is Ivy, but that’s where things get complicated. She explains that there is a glass ceiling for female supervillains, and to corroborate this she tells the story of the Queen of Fables (Wanda Sykes), who became so powerful that the Justice League shut her down and turned her into the U.S. Tax Code.

Harley goes to see the Queen personally, and what she somehow takes from this is that she should be looking for henchmen that nobody else wants. The first is Dr. Psycho (Tony Hale), who is in hot water for calling Wonder Woman a c–t and then going on TV with Giganta to apologize and calling her a c–t too. (Both women are voiced by Vanessa Marshall.) Dr. Psycho initially believes himself above Harley, but once Lex Luthor (Giancarlo Esposito) publicly ejects him from the Legion of Doom for using the C-word he’s all for it.

The next recruit is wannabe thespian Clayface (also Alan Tudyk), and this is a great interpretation of that character. The first job for the new gang is petty revenge on Maxie Zeus, which takes a funny turn when Clayface, supposedly distracting him by posing as the mailman, invents an elaborate backstory for the character and claims to be Zeus’s illegitimate son. While he does that, Harley and Dr. Psycho steal the Olympic gold medals. They’re caught in the act, but all come together as a team, beating Zeus up and forcing him to announce that Harley’s new crew aren’t to be trifled with.

Harley Quinn Season 1, Episode 3, “So You Need A Crew?”, ends with Harley getting the crew that she wants — and also the namesake road that she wanted too. A happy ending all around, and a decent episode addressing the very real problems of predatory men and gender depictions in the comic book industry.