Greta Gerwig recreates such a highly engrossing, winsome adaptation of Little Women you can’t help but be taken with it. It’s utterly captivating.

Greta Gerwig recreates such a highly engrossing, winsome adaptation of Little Women you can’t help but be taken with it. It’s utterly captivating.

I’m convinced the great Greta Gerwig was Louisa May Alcott in another life. The supremely gifted writer/director of Lady Bird and the scribe of Noah Baumbach’s Mistress America has Alcott’s knack of finding the truth with her eye for observational honesty and a talent for comedic dialogue. She recreates such a highly engrossing, winsome adaptation of Little Women you can’t help but be absolutely taken with it. It’s utterly captivating and its deep bench that is irresistibly charming.

The film follows the lives of four sisters during the Civil War. Of course, they are all different from each other as they come of age during a turbulent time in American history. Jo (Saoirse Ronan) is the dreamer of the group. She is headstrong, doesn’t like the concept of traditional roles, and wants to have control over her own life. Meg (Emma Watson) is your typical young woman being raised to marry early and starting a family. Their little sister Amy (Midsommar‘s Florence Pugh) wants to be just like them, always snapping at their heels, and being an utter annoyance at every turn. She also has a crush on an older boy named Laurie (Timothee Chamalet) who only has eyes for Jo. Lastly, Beth (Sharp Objects‘ Eliza Scanlen) is the loyal, subservient daughter who has no ambition other than to stay in the house and take care of her parents (played by Laura Dern and Better Call Saul‘s Bob Odenkirk).

I’ve never claimed to be an expert on film versions of Alcott’s most famous work; Little Women has been adapted to the silver screen eight times, and I have not caught the two silent film adaptations or the one starring a 26-year-old Katherine Hepburn. I, myself, have only watched the Wynnona Rider version once, decades ago. That film was also star-studded (besides Ryder, you had a young Claire Danes, Kirsten Dunst, Christian Bale, and Susan Sarandon in the mother role), and was the first to take the book seriously, without the intention of making it just for children.

It’s hard not to compare the two and Gillian Armstrong’s version was so well received that it has been 25 years since anyone has tried to bring it back to theatres. While that update took the material seriously, Gerwig channels Alcott’s noted feminist values that make it a perfect match and the style of the #MeToo decade. It has a razor-sharp, funny script with plenty to say about one’s place in society, and the limitations put upon women in their traditional roles. It also fits the film with narrative timelines like pieces of a puzzle, accessing storylines within the novel, times before/after Jo left the nest, and Alcott’s struggle to be a published writer in a man’s world (where every story must end with the girl getting married). 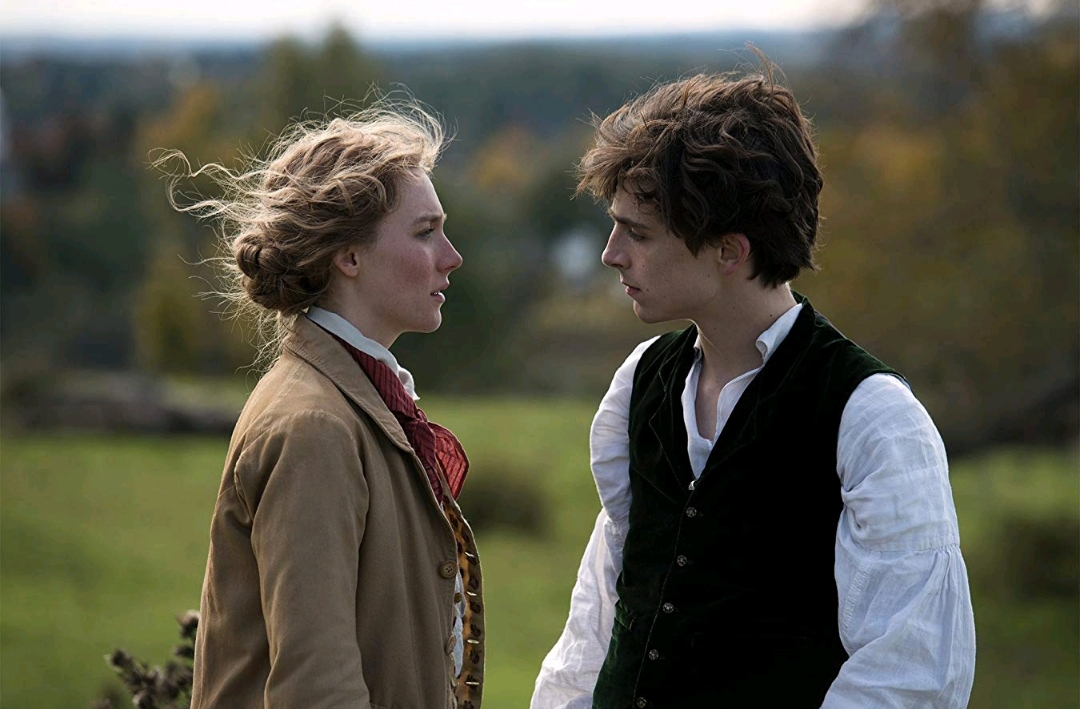 Little Women is beautifully shot here, but you could argue that Alcott’s work could have used an updated, unsanitized version that may tone down the film’s comedy and take away the rose-colored glasses when it comes to sexism at the time with a greater edge. What you have to do is to judge the film for what it is and it’s a beguiling work. The credit goes to Gerwig whose third film has a huge cast and could have everyone to buy-in. You can always spot a film where a role was expanded or overstuffed to fit in a named actor. Here, what could have been with Emma Watson’s star wattage may have made the film appear and feel uneven and overshadowed Ronan’s Jo.

Everyone works so well together here and within the means of the role, it’s refreshing and makes Gerwig’s latest feel effortless. What makes the film gel is its large cast, that, besides the main players listed above, includes most of the comic relief coming from a deft Meryl Streep as the cranky Aunt Josephine, a heartwarming Laura Dern, a nice turn from the always reliable Chris Cooper, and everyone favorite go-to yuppy character actor (and apparently in any time period) the award-winning playwright Tracy Letts.

Gerwig’s Little Women is a deliriously delightful, massively moving, and continuously charming adaptation of Alcott’s beloved classic. The cast acts impeccably here and the deep bench moves facilely that feels shorter than its two-hour running time. With award-worthy turns from Ronan, Streep, and Dern, not to mention the wonderful adaptation from Gerwig, Little Women is an appointment viewing this holiday season.