Home » Streaming Service » Disney+ » The Mandalorian Recap: More Stars Than There Are In Heaven

The Mandalorian Recap: More Stars Than There Are In Heaven

“Chapter 6: The Prisoner” was chock full of cameos and made for a fun standalone quasi-horror adventure, even if you can’t help but ask some questions about the show’s overall direction.

“Chapter 6: The Prisoner” was chock full of cameos and made for a fun standalone quasi-horror adventure, even if you can’t help but ask some questions about the show’s overall direction.


This recap of The Mandalorian Season 1, Episode 6, “Chapter Six: The Prisoner”, contains spoilers. You can check out our thoughts on the previous episode by clicking these words.

It’s time, I think, to ask a question or two about where exactly The Mandalorian is going in the near future. And I don’t mean where in the galaxy, since the answer to that seems to be wherever he feels like. I’m quite alright with that since it makes the galaxy feel big and diverse, and each episode feel slightly different, tonally and stylistically, from the last. But where is the show itself going? We’re over halfway through the season and we pretty much abandoned the overarching narrative in the third episode. Baby Yoda is spending an increasing amount of time locked in a cupboard on the Razor Crest, and while he factors into the proceedings, and does again in “Chapter 6: The Prisoner”, he has long-since stopped feeling integral to the plot. You must wonder if Mando (Pedro Pascal) plans to keep him onboard forever as he continues to hop around doing random odd jobs for people.

Perhaps that wouldn’t be such a bad thing since I enjoyed The Mandalorian Episode 6 just as much as any of the others for what it was, but I think I’d enjoy it even more if I had a better sense of what the show was ultimately trying to accomplish; a better sense of the stakes, of why Baby Yoda is so important, and so on, and so forth. Then again this show is so stuffed with interesting characters, ideas and set-pieces that in its brief running time – “The Prisoner” clocked it at about 40 minutes, the longest yet – there’s scarcely enough room to wonder about all of this. It’s only when I sit down to think and write about the show that the questions come up.

But no matter. We begin “Chapter 6: The Prisoner” with Mando touching down on a platform belonging to Ranzar Malk, aka “Ran” (Mark Boone Jr.), a beardy wrong-‘un who he has previous with. There’s a job to be done – springing an inmate from a New Republic prison ship – and a team to pull it off with, the team being a large part of the pleasure in The Mandalorian Episode 6. There’s geek-savvy casting all over the place as we’re introduced to former Imperial sharpshooter Mayfeld (Bill Burr, making absolutely no effort to disguise the fact he’s Bill Burr), a giant Devaronian bruiser named Burg (Clancy Brown), a Twi’lek named Xi’an (Natalia Tena), who it’s implied Mando has some romantic history with, and a droid, Zero (Richard Ayoade), who it turns out will be flying the Razor Crest for the majority of the mission.

There’s never a sense that this crew is on Mando’s side, which very much turns out to be the case, much to their detriment. But it’s a fun group in the sense of aliens and droids knocking around with Bill Burr, especially once they arrive on the ship – turns out it’s guarded by a single officer played in a knowing bit of stunt casting by Matt Lanter, who voiced Anakin in The Clone Wars – and things start going drastically wrong. Tensions flare, standoffs ensue, a distress signal is sent to the New Republic – more on that later – and Mando is eventually betrayed by the group when it’s revealed that the prisoner is one he put there: Another Twi’Lek, Qin (Ismael Cruz Cordova), brother of Xi’an. 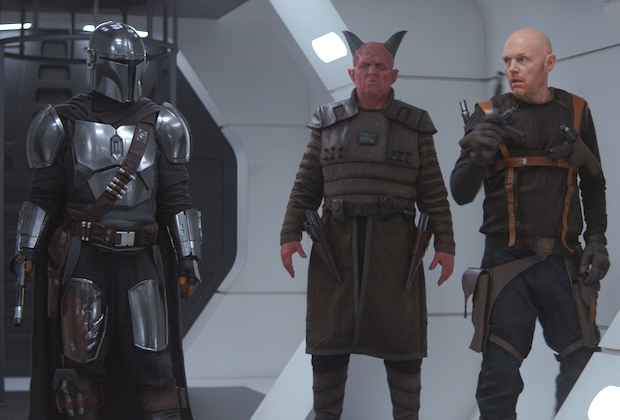 The Mandalorian Episode 6 then adopts a kind of quasi-horror vibe as Mando stalks the crew in the red glare of the lockdown lights, taking them out one by one in various creative little fights. He sandwiches Burg in between two sets of blast doors. He has a knife-fight with Xi’an, creeps right up behind Mayfeld in a creatively shot sequence, takes Qin captive, and puts a blaster bolt through Zero’s back just as he’s preparing to do away with Baby Yoda.

The job is complete, but the betrayals aren’t over. Mando takes payment for bringing Qin back alive and leverages Ran’s “no questions asked” policy to avoid having to explain what happened to everyone else, even though it’s fairly obvious. But as Mando flies away in the Razor Crest, Ran orders him killed by an associate in a starfighter, which is when he realizes that Mando has dumped the New Republic distress beacon on him and X-Wings are on their way to blast the platform into pieces.

Just when you thought The Mandalorian Season 1, Episode 6 was about done with surprisingly recognizable faces, you realize that the X-Wing pilots are played by directors of The Mandalorian, including Dave Filoni.

A last-minute reveal that Mando is more merciful that it appeared clashes a bit with some of the backstory dispensed in “Chapter 6: The Prisoner”, which suggested he once got up to all kinds of underworld mischief with Ran and company. But that’s a small quibble, since the entire point of the Mandalorian as a character is that he’s enigmatic. If we knew everything about where he’d been and what he’d done throughout his life he’d be much less interesting, though I can’t deny that a prequel set during his rougher years sounds pretty appealing.

Nevertheless, with just two episodes left in the season, what I hope to see is a bit more of an indication of a wider plot, a more concrete point, so we can at least conclude with a tantalizing promise of a second season and a continuation of an actual storyline, rather than an excuse for a sequence of – extremely enjoyable – vignettes. Still, The Mandalorian Episode 6 was still great Star Wars fun, and you can never have quite enough of that.