An emotionally foregrounded episode of Mr. Robot asks: what do you do once you succeed in your quest?

An emotionally foregrounded episode of Mr. Robot asks: what do you do once you succeed in your quest?


This recap of Mr. Robot Season 4, Episode 10, “410 Gone”, contains spoilers. You can check out our thoughts on the previous episode by clicking these words.

Standing in a park, Darlene fiddles with some code. She does not tell Dom what she is doing. True to her nature, Dom starts questioning Darlene. Darlene, true to her nature, makes Dom wait until she says “shut the f**k up and just watch” and lulls her into a kiss.

When Dom looks around, she sees that the people around them have taken out their phones. They look happy.

Darlene reveals that she has found a way to distribute all the money stolen from Deus. She and Elliot have succeeded. Why did she wait to do it now?

The answer, of course, is explained by Mr. Robot Season 4, Episode 10 itself, which lets the hacking and analysis of global power relations take the backseat, in order to focus on Dom and Darlene.

Has anyone had it worse than Dom?

“410 Gone” begins with Dom in the hospital. All she wants is to see her family, but the FBI agent looking over doesn’t even know where they are. She goes home, alone, and makes herself a grilled cheese. The editing creates a sense of regularity, which Dom soon explicates. Now that everything has blown over, she can relax, and eat grilled cheese. The chaos of being hunted by the dark army is replaced by the monotony of a closing door and a yellowed apartment.

When Darlene arrives, she cannot imagine why Dom is still at home. Unlike Dom, Darlene has been living underground for a while. “I’m not gonna let you just sit here and wait to die,” she says, but her voice betrays something. What exactly is the threat?

With the Dark Army mostly gone, Darlene seems to have personal reasons for packing up and skipping town. “This is emptiness,” she tells Dom, “there is nothing here for you. But there is still a chance for you if you come with us. But the “us” she refers to is up for debate. 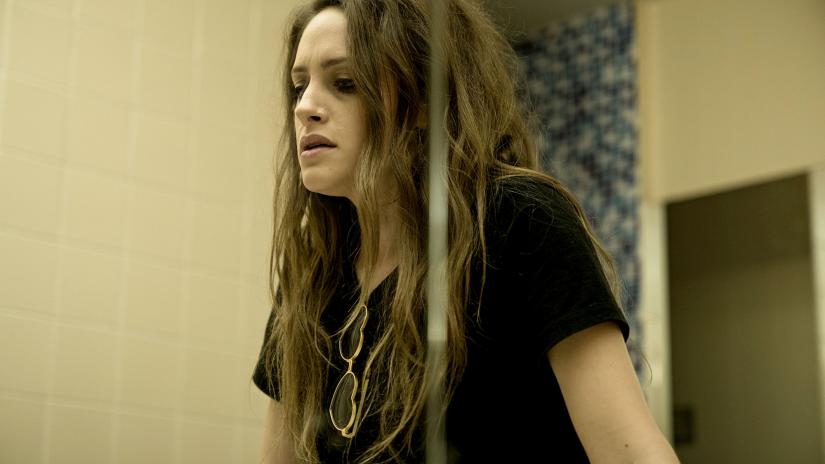 The two rendezvous with Elliot at a motel, he sets off back to Washington Township (which I’m assuming will be covered next episode). Dom is shocked to find Leon working for the Aldersons, but as he told Elliot earlier in the season, he is a true capitalist, only chasing the highest bidder.

Journeying to Boston, Dom and Darlene’s differences are underscored. Dom has family she cares about, this life is not for her. For Darlene, the only family she has is what’s keeping her in the game.

Once they arrive at the airport, Dom has a run-in with Bobby Cannavale (I know his character has a name, but I like to think he’s playing himself). Standing behind a cardboard cutout of… himself, it seems that Bobby has found a second calling as a novelist. As the Dark Army leadership collapses, everyone under it finds another source of employment. They shift gears and keep on grinding.

But Dom doesn’t care for his novel. She is terrified. Cannavale is confused, he tells her that the Dark Army has “picked up and skedaddled off. No-one cares about your family now”. For the first time in a while, Dom can breathe a sigh of relief.

But that brings up another question. If she is no longer being hunted, then why are they fleeing?

Dom confronts Darlene. She reveals her desire has always been to go to Budapest, and the threat of the Dark Army was the excuse. Darlene is having trouble letting go of the past; trouble realizing that the reasons that have driven her actions for so long no longer exist. She has nothing left but Elliot.

But Dom does not want to flee. She needs to go back to her family. She hugs Darlene, and they head off in separate directions.

They walk away. A montage shows them thinking about the other. Then they stop

And then the music hits. Dom begins running. She makes it through the airport, all the way to the gate and onto the plane…

…but Darlene never got on. As Dom boards, she sees the seat next to her is empty. She lies back and finally gets to sleep.

Darlene is hyperventilating in the bathroom. Another lady asks if she’s ok. Darlene replies, “I can take care of myself.”