Prepare For Picard: A Star Trek Watchlist is a comprehensive guide of Star Trek episodes and films to better inform your knowledge of Jean-Luc Picard before the new show airs.

We’re at the beginning of a golden age of Star Trek. I’ve lived through one of those–from 1993 to 2001 Star Trek had two series on the air, then a sequence of strong, successful films. Then we had a desert, a dearth of Star Trek during which we all pined for more. It seems that another golden age has returned. Star Trek: Discovery has finished its second successful season and has ushered in a long-awaited yet never really dreamed of series: Star Trek Picard.

We never thought that Sir Patrick Stewart would return to his iconic role as Captain Jean-Luc Picard. It’s a dream come true for die-hard fans, and another opportunity to bring in new Trek viewers. I suspect that the show, run by Pulitzer Prize winner Michael Chabon, will be smart enough to tell stories that new Trek viewers can enjoy while also building upon the decades-long relationship we have had with the captain of the Enterprise. 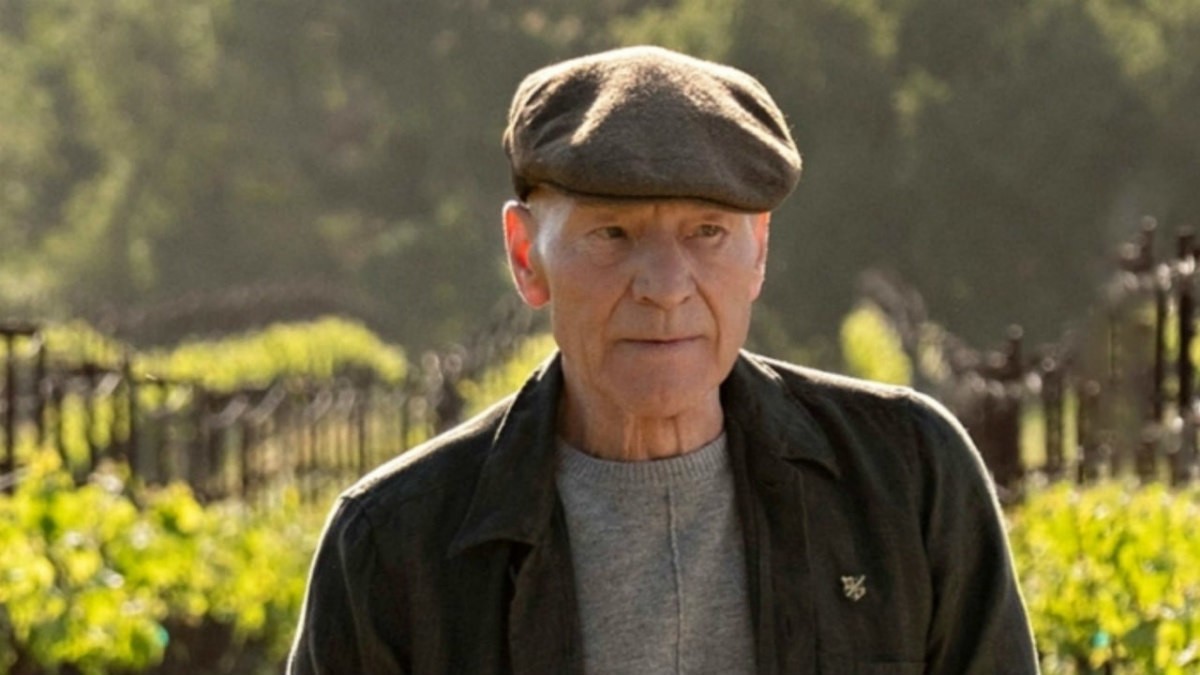 At this point, we’ve had a few trailers with big reveals–Picard will be dealing with the repercussions of the destruction of Romulus, with the Borg and Seven of Nine; he’ll meet up with some of his crewmates from the Enterprise-D, though he’s no longer in Starfleet. Based on the few small details we’ve been able to glean, in addition to knowing this character so well, I’ve come up with a primer to get us ready for Star Trek Picard over the next month.

The episodes I’ve chosen may include some predictions as far as the plot for Picard, but they’re much more about character than story. I’ll also include episodes that inform other major Picard characters like Seven of Nine and Hugh.

I’ve put asterisks next to what I believe are essential episodes or films from the Star Trek canon in order to prepare for the upcoming series which will air on January 23rd in the US.

Star Trek: The Next Generation 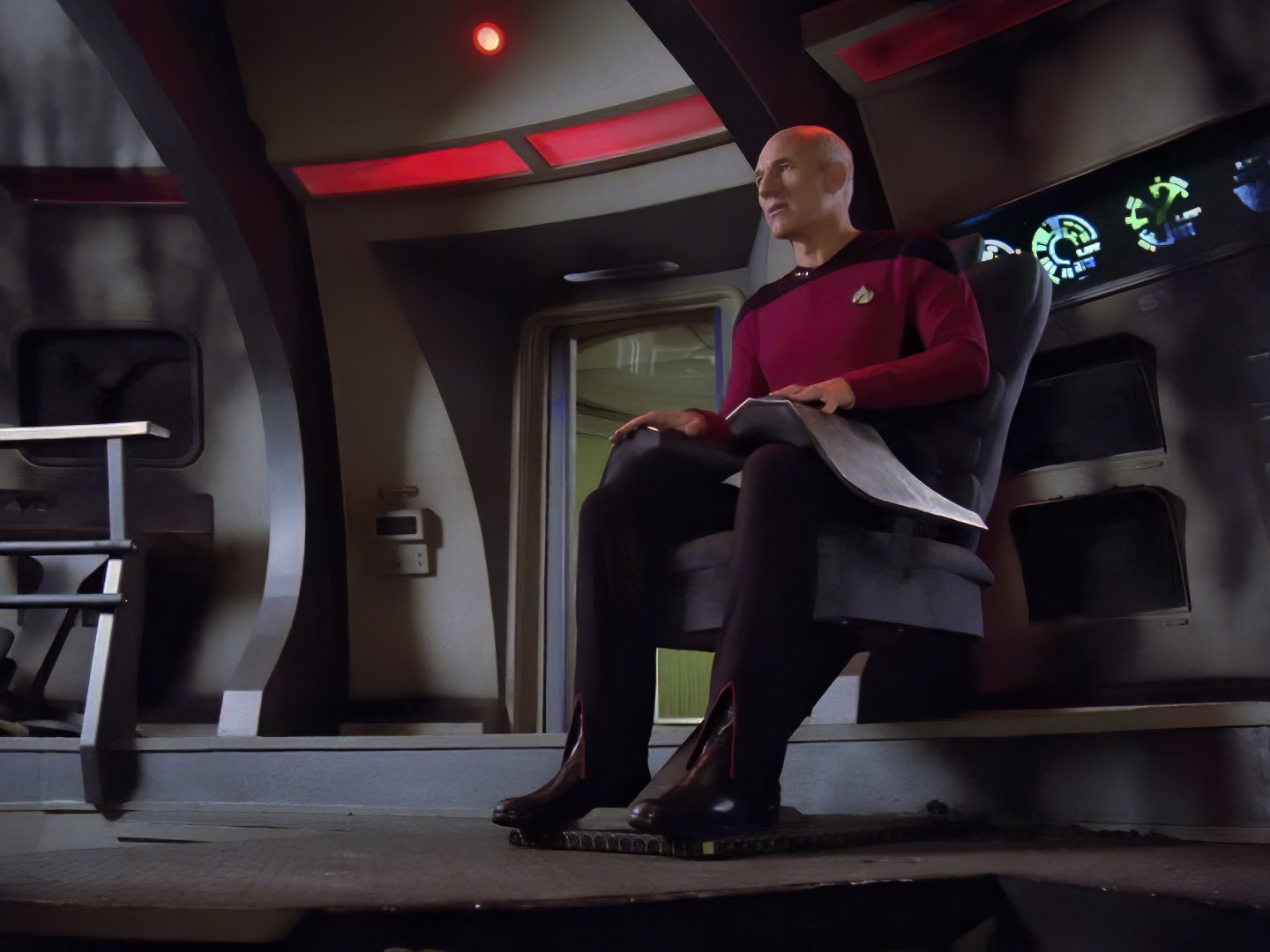 Some might look sideways at this episode–it’s situated in the early part of TNG‘s first season (Star Trek rarely has strong first seasons). “The Battle” gives us a glimpse at Picard before his time leading the Enterprise crew.

While we get plenty of excellent episodes of Jean-Luc Picard the starship captain, we also get a few about Picard the man, with interests and hobbies aside from galactic adventures. He’s passionate about literature and music and culture. In this case, Picard gets trapped in a holodeck while acting out his favorite detective: Dixon Hill. We learn a lot about what makes Picard who he is.

We know that in the new show Picard has left Starfleet and that he’s had many run-ins with the Federation higher-ups, often having to stand up to protect the principles of the Federation. This is an excellent example of a threat to the very fabric of the Federation that Picard must stop. It’s a bit campy, but it still a lot of fun. 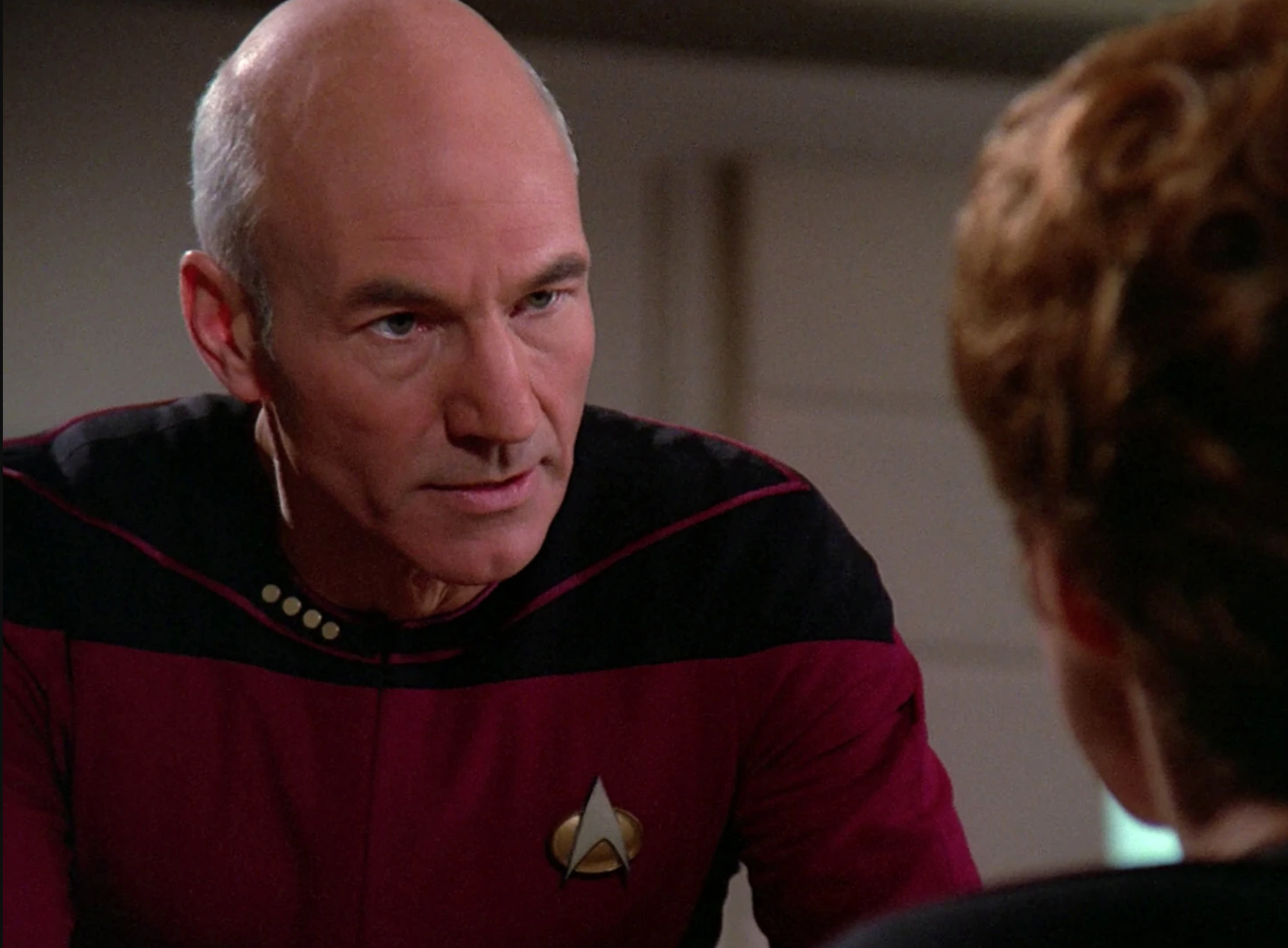 “Measure of a Man” is one of the best episodes of Star Trek: The Next Generation. It involves Picard personally standing up for one of his crewmembers – Data – whom Starfleet has deemed not a person. This showcases Picard’s dedication to his crew and his determination to ensure that justice is done, even when he must risk his reputation and career to do so.

Since the Borg will be a significant part of Star Trek: Picard–and because they had such an impact on Picard’s character–their first appearance in Star Trek seems worthwhile. 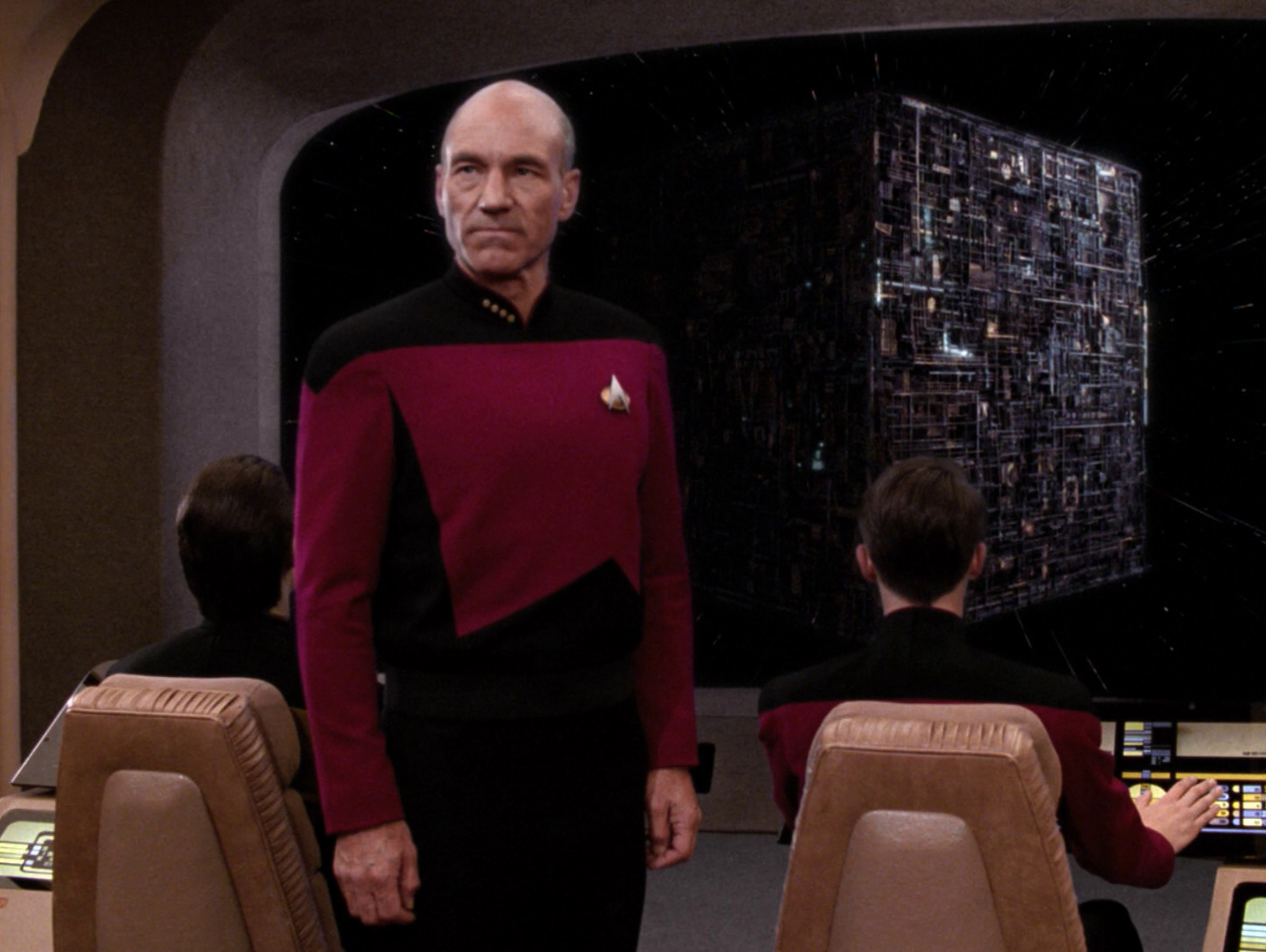 For the same reason that “Q Who” is important, “The Best of Both Worlds” is even more necessary. The Borg kidnapping of Picard drastically deepened Star Trek: The Next Generation‘s ethos and added even more layers to Picard’s character and set up Star Trek: Deep Space Nine, as well as major story points for Star Trek: Voyager. They’re also two of the best episodes of Star Trek ever made.

We tend to forget that, prior to the early 2000s, serialized storytelling was just rare. This makes the follow-up to the devastating events of “The Best of Both Worlds” unique, especially for Star Trek pre-Deep Space Nine. Picard must journey home to France to recover from the Borg assault. He reconnects with his family and finds himself again. Since Picard will at least start in Chateau Picard, his family vineyard, this seems a necessary episode for background.

“Darmok” is quintessential Picard. He’s stranded on a strange and dangerous planet with an alien captain (Paul Winfield), neither of whom can communicate with the other. They must find common ground in order to survive and to forge a relationship between their species. This tells us everything we need to know about Jean-Luc Picard. Picard is a leader and a warrior, but most of all he’s a diplomat, a role model for us all.

Picard will, no matter what, stand for what’s right. He’s forced to take on an ensign whom no one else wants on their ship, and he learns to listen to her to get to the truth of a situation, despite his superiors’ attempts to subvert the Federation’s principles. Picard listens to the underdog, even when there’s no reason to.

Picard grew greatly over the course of The Next Generation. His first episode, “Encounter at Farpoint” sees him hating kids, ordering Wesley Crusher off his bridge. However, “Disaster” forces him to lead and inspire a group of children with whom he finds himself trapped. He must move past his discomfort and show them what a true leader can be. 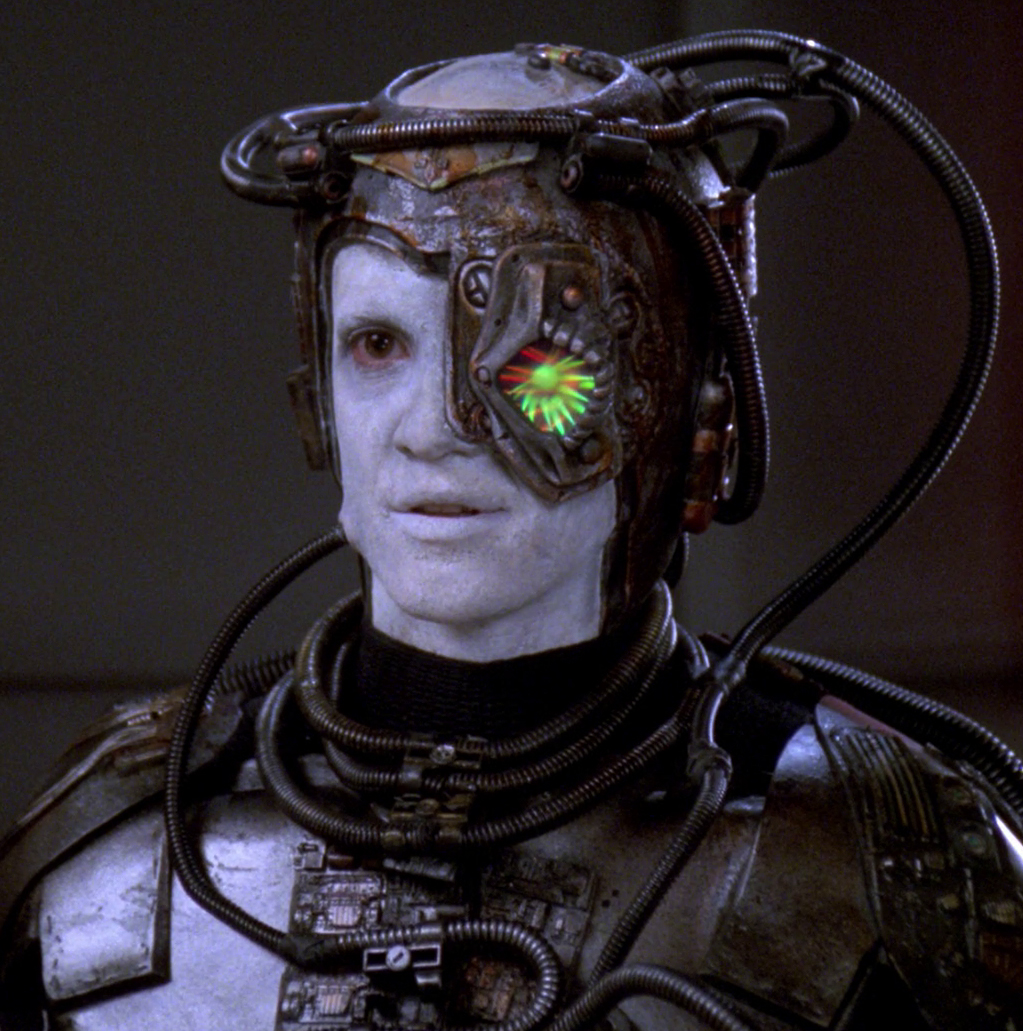 To some extent, Hugh (Jonathan Del Arco) will be involved in Star Trek Picard. Hugh is a Borg who found himself separated from the Borg Collective, and Picard must find a way to reach this lonely youth and send him back to impact the Borg’s consciousness. Again, the Borg have a deeply personal, traumatic relationship with Picard, so on two fronts, this is an essential watch in preparation for Picard.

To start with, this is one of the best episodes of Star Trek (TNG has a lot of those). Picard finds himself living someone else’s life; he goes through an entire lifetime in the span of a few hours–all in his mind. Those experiences shaped him and further grew him as a character. It’s a moving hour of television.

Picard seems to be leading a rogue mission in the new series, but this will be far from the first time that he’s done so. “Chain of Command” shows his resilience and determination in the face of nearly insurmountable odds.

Like “The Battle” (and let’s face it, in a much better form than “The Battle”), “Tapestry” gives us a deeper look into the character of Jean-Luc Picard. There’s a near-death experience, an end of life reflection, and Q (who, for all his foibles, holds a mirror up to Picard to reveal hidden depths).

After Hugh’s release back to the Collective in “I, Borg,” he returns in a big way here. A portion of the Collective is following Lore, Data’s brother, and Picard and the Enterprise crew must stop them from taking over everything.

Picard goes on an undercover mission. This is just a fun two-parter in which Picard gets away from the normal day-to-day of captaining a starship and into some good rogue fun. We know that in Picard he’s left Starfleet, so I suspect that the only way he gets into the captain’s chair is by commandeering a ship and doing what needs to be done. 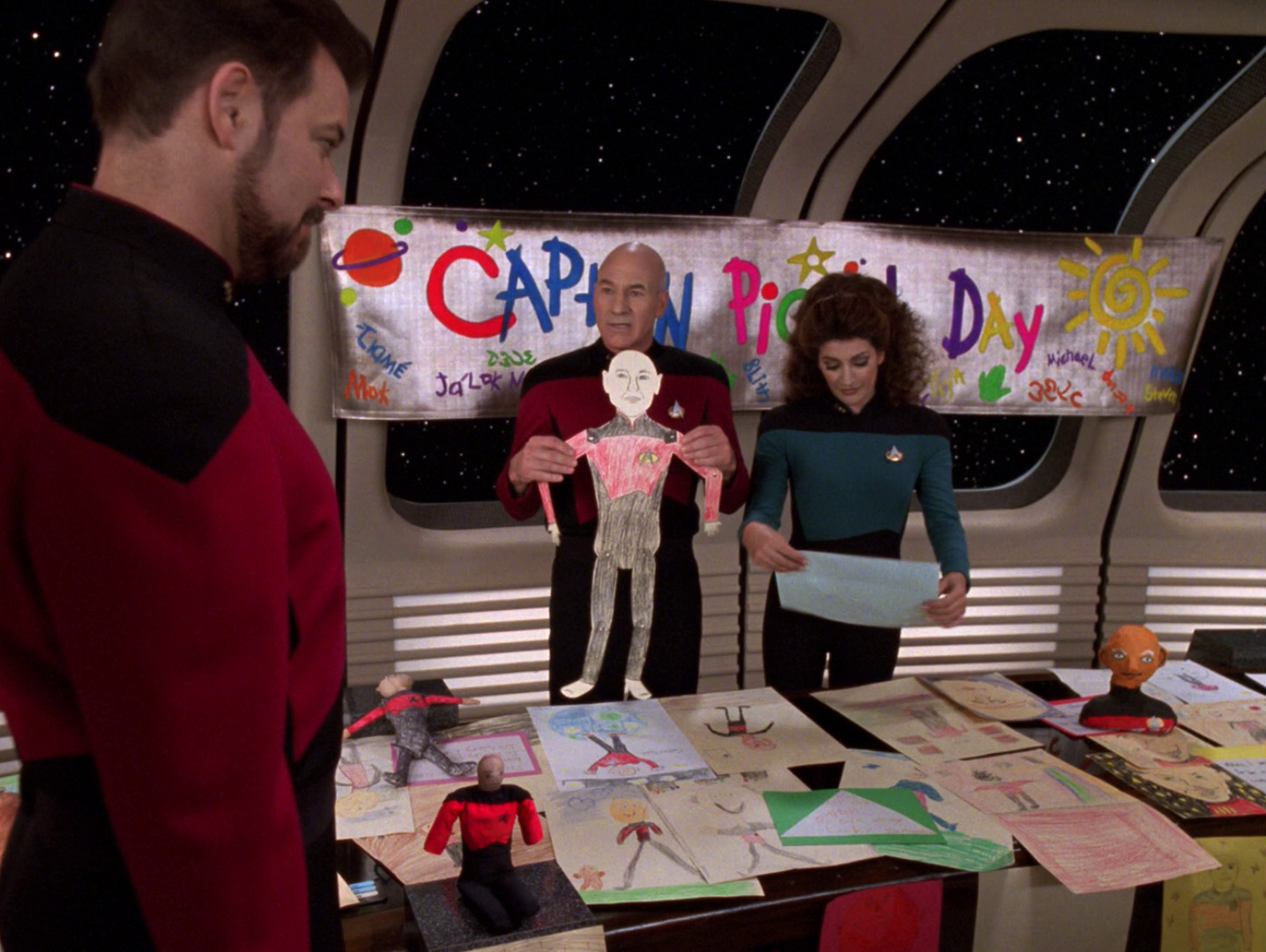 Somehow, the “Captain Picard Day” banner from this episode was featured in this trailer. If you’re a completist, I’d watch this episode, because there’s enough speculation that some of the characters in Picard will be the grown-up kids from “Disaster” or other kids from the Enterprise.

Picard’s legacy was cemented with “All Good Things.” It’s the series finale of TNG, and it follows him throughout time and space, with his colleagues ready to follow him to the ends of the galaxy–much like Picard will likely do. Moreover, it features a much older Picard, as we’ll meet in Picard.

One of the most jaw-dropping moments from the first major Picard trailer was the revelation of Jeri Ryan’s Seven of Nine. We don’t know how thoroughly she’ll be involved in the new show, but both she and the Borg were featured prominently, so her introduction seems pivotal on multiple fronts. 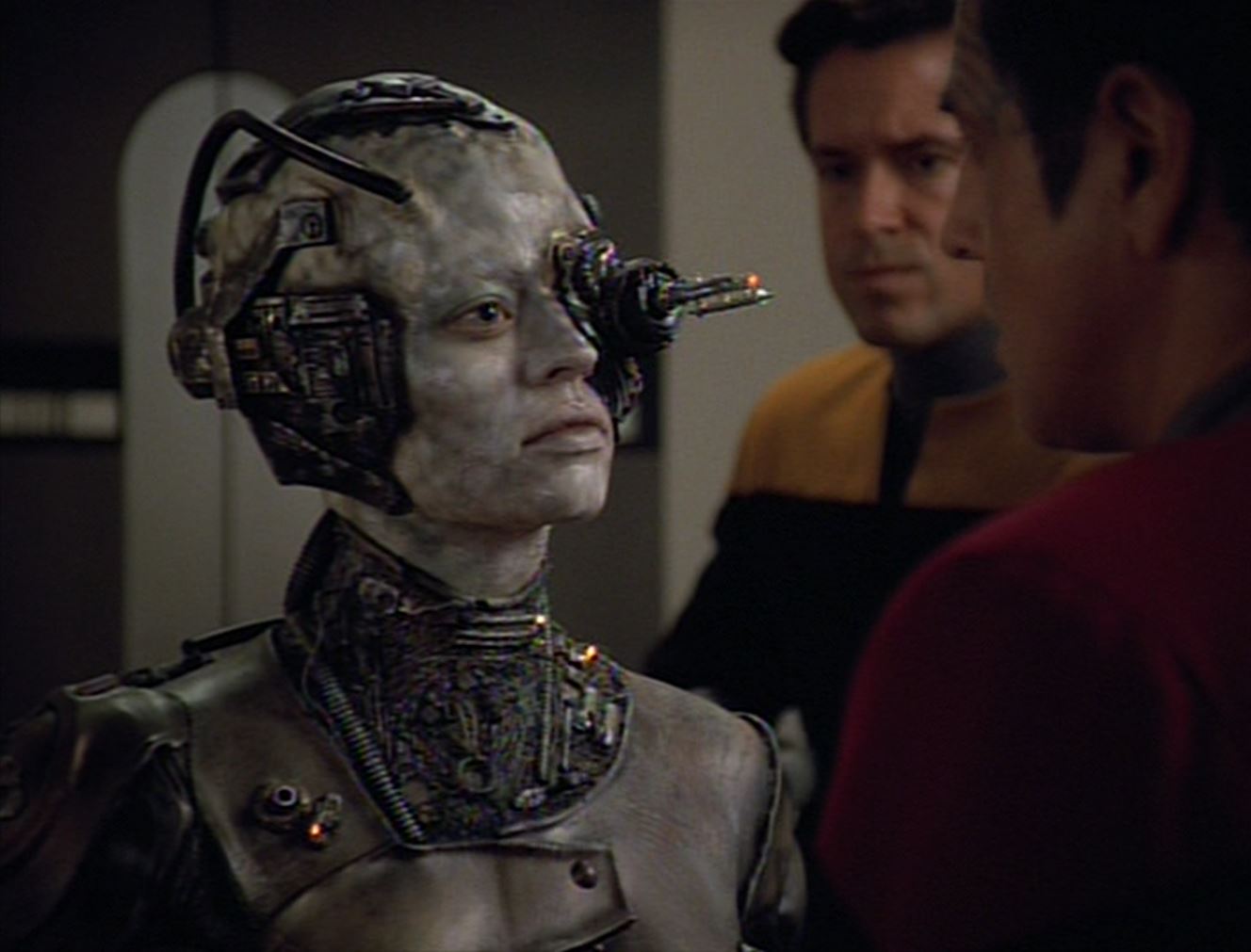 Again, we’re not sure how much Seven of Nine we’ll get in Picard, but this is Seven’s backstory when she was Annika Hansen. It’s compelling and moving storytelling.

In Picard, Seven seems much more human, meaning the practice that we see her doing in this episode has started to pay off. We see the creation of an advanced, futuristic Borg drone in “Drone,” which might hint at what we’ll see in Picard.

This is a turning point episode for Seven of Nine. She needs to make a choice between saving herself and saving Voyager, as well as possibly sacrificing herself for the greater good. Choices like these define her character throughout the series and will surely inform her in Picard. 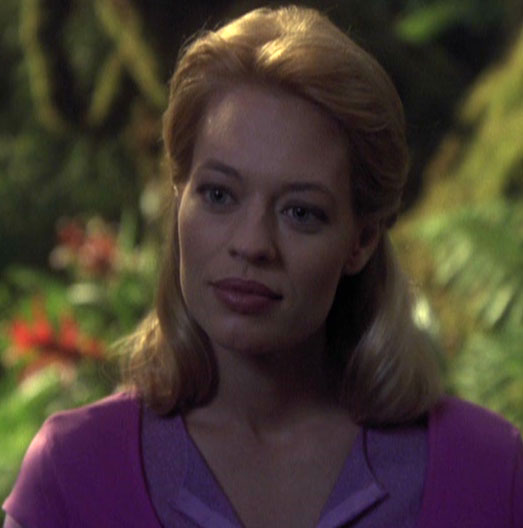 This is a two-parter that sees Seven of Nine entering a collective unconscious (much like The Matrix) where freed Borg drones go during their regeneration cycles. Seven needs to lead a rebellion against the Borg Collective from within. If Seven is going to help Picard fight the Collective, she’ll draw on this experience to do so.

As far as we’ve seen, this is where the Borg have been left up until Picard (unless you decide to read some of the great non-canon books). This seems to be an excellent starting point for some of the conflicts in Picard.

This is an essential character piece for Jean-Luc Picard. He’s got a relentless drive to defeat the Borg that I foresee he’ll need to rein in as he sets out on his mission. First Contact is a brilliant film–one of the best in the Star Trek series.

This is the last of the Prime timeline that we’ve seen, and the final adventure of Picard and his Enterprise-E. Picard will pick up nearly 20 years later and will deal with some of the fragments of the story relating to the destroyed Romulan Empire.

On that same note, we learn about the destruction of the Romulan Empire from Prime Spock as he diverts into the Kelvin timeline. These events seem key to Picard’s newest mission.

Is there anything else? Any other episodes or films you’d add to this list? Comment below and let me know what you think!