2019 was a great year for film. Smaller films seem to be taking the stage amongst the giants and standing shoulder to shoulder with them, holding their own. This top ten list came down to the very end of the year, with places on the list shuffling around and the top slots shifting back and forth.

The films which rose to the top are those which moved me. Each did so in different ways – some to tears, some to laughter, some to marvel in awe (no, that’s not a sly way of saying that Endgame is on this list). I enjoyed my time at the movies this year. I learned a lot, found myself challenged by the ideas put on screen, and constantly found myself learning a bit more about the process of critiquing film while balancing that most important aspect of the moviegoing experience: enjoyment.

Noah Baumbach’s Marriage Story is a tragic, all-too-familiar depiction of the state of marriage in this day and age. It’s horrific and funny and smart with perfect casting. Scarlett Johanssen and Adam Driver give their all to their performances, both of whom will likely garner awards attention. However, aside from the technical aspects, Marriage Story both affected me on a gut-level, sticking with me and hoping that the seeming inevitability of its bittersweet ending isn’t the new norm for our world.

I loved Knives Out. I don’t know exactly what I expected, but it both defied and exceeded my expectations. The acting is brilliant, but writer-director Rian Johnson’s script is just out of this world funny and smart. It’s a continuously interweaving, looping whodunit with clever dialogue and smart plotting that neither takes itself too seriously or forgets to just have fun.

Yesterday is a loving tribute to the Beatles. Danny Boyle’s heartwarming film is beautiful, happy, and fun. The film’s thesis is that music brings people together. It speaks to us all, just as stories do. It doesn’t matter who you are or where you come from, music resonates in our hearts, and the Beatles tapped into that, and Yesterday reminds us all why we fell in love with that long-haired rock band from Liverpool in the first place. Himesh Patel and Lily James are delightfully earnest throughout – it’s such a refreshing film in the midst of a year filled with such heavy real-world material.

JoJo Rabbit is one of the stranger films of the year, and it’s also probably the most thoroughly charming. It’s filmed beautifully, with writer-director Taika Waititi’s signature wit and winks to the audience. It confronts the absurd juvenility of prejudice while also telling a moving story of a young boy in war who experiences just about every emotion possible… all accompanied by his imaginary friend Hitler.

6. A Beautiful Day In The Neighborhood

A Beautiful Day In The Neighborhood is the perfect tribute to Mr. Rogers. He would loathe to be the focus of a film, so instead, it focuses on good, incredible, important work and the impact that he had on millions of kids over multiple generations. Tom Hanks gives the most transformative performance of the year since Joaquin Phoenix‘s Joker, and there couldn’t be a more diametrically opposite film or performance. Rather than violently railing against a failing society, Mr. Rogers takes a stand of love and respect and inspiration to us all.

Parasite is a nearly flawless piece of filmmaking. It’s funny yet poignant, with much to say about classism and family and trust. Bong Joon-Ho masterfully tells his tale of a down-on-their-luck grifter family. They leech off of everyone around them in small ways until they land their whale: a rich family who can hire them. It’s told at times in an Ocean’s 11 tone, accompanied by a well-crafted comedy of errors that all comes together in the last thirty minutes to say something much smarter and deeper than we could have ever expected. The acting is pitch-perfect all the way around—a true ensemble. 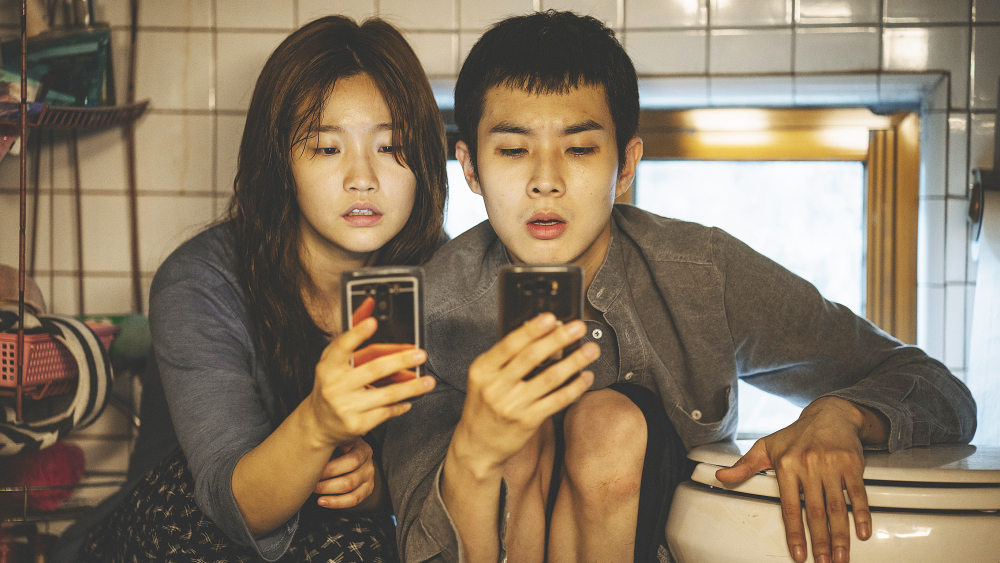 Lulu Wang’s The Farewell is an emotional portrait of a Chinese family’s journey in preparation for grief. It’s beautiful, understated, and incredibly well-acted, especially by Awkwafina and Zhao Shuzhen. It’s also a wonderful statement about the difference between Eastern and Western sensibilities that many of us in the west just don’t recognize.

Alma Har’el’s Honey Boy is a powerful, emotional exploration of a dysfunctional relationship between a father and son. It’s shocking and sad and wholly moving, with a final cathartic scene to rival just about anything out there. Shia LeBeouf delivers as a writer, an actor, and a son. Noah Jupe is a revelation on every level (and it’s a travesty that he’ll receive little to no awards attention), and Lucas Hedges brings it home as he always does. It actually struck me even more on my second watch, unexpectedly bringing tears to my eyes and lingering in my thoughts long after the film finished.

2. Once Upon a Time in Hollywood

Once Upon a Time in Hollywood is easily Quentin Tarantino’s most lovingly made, precisely crafted film. It’s a heartfelt love letter to Hollywood, creating a true sense of time and place and life. Setting has always been Tarantino’s strong suit, which he’s developed and honed since he began: creating a sense of character and place. The layers of reference and homage are deep, and Tarantino’s mature, deft hand is felt—maybe for the first time in his career. Instead of simply having characters reference films or music, we live it with them. He lets us fall headlong into 1960s Hollywood in all its glory and foibles.

It’s a thoroughly engrossing, deeply layered film about a transition in life and time. The backdrop of the Manson murders, against which Tarantino has set Once Upon a Time in Hollywood, symbolizes this nearly violent change of times. The times are truly changing, and the hippies are going to try to kill off the old guard–but they won’t go quietly. Gone are films like The Great Escape in favor of Easy Rider and exploitation films. Tarantino has no major problem with those films; they’ve been his vernacular since he began making movies. He simply adores this bygone time and laments its waning presence today. It’s beautiful and haunting and meaningful—easily Tarantino’s most restrained, impressively constructed film.

About five minutes into Little Women I knew I loved it. I sat through it with a smile, letting the snappy dialogue (so much of it gleaned from the original novel) and the breathtaking, moving performances wash over me. Greta Gerwig’s direction and adaptation of Louisa May Alcott’s novel are nearly perfect, gleaning the absolute best performances from everyone involved. Each performance is multilayered on its own, with the phenomenal Saoirse Ronan once again rising to the top of the acting crop (for like the third year in a row!). However, this isn’t merely a Ronan vehicle–it’s such an ensemble film across the board, with even the side characters lovingly and earnestly portrayed. I loved this film so thoroughly that I immediately wanted to watch it again.