Home » TV » Sick of It season 2, episode 1 recap – Karl Pilkington continues to examine his life in “The Biscuit”

Sick of It season 2, episode 1 recap – Karl Pilkington continues to examine his life in “The Biscuit”

Karl Pilkington continues to examine his life in “The Biscuit”, as his usefulness is brought into question.

Karl Pilkington continues to examine his life in “The Biscuit”, as his usefulness is brought into question.


This recap of Sick of It Season 2, Episode 1, “The Biscuit”, contains spoilers. You can check out our thoughts on the previous season by clicking these words.

Karl Pilkington is back, and he’s as miserable as ever — perhaps even more so than usual in Sick of It Season 2, Episode 1. Norma (Sondra James) is getting a full-time carer, rendering him — in his mind — useless, and he’s descending further and further into a crumbly mire of biscuit-based self-loathing. “The Biscuit” opens with him interviewing a prospective carer who he takes a liking to, but Norma has other ideas: Ruby (Marama Corlett), a young woman who Karl thinks is just about the right age to be playing at the park where they meet. The interview is conducted on a pedalo which he miserably pumps across the water.

Karl is working as a taxi driver, debating his inner-self about the passengers piping up towards the end of the journey to suddenly give directions. When he returns home he finds that Ruby is tidying his room, uncovering a mountain of empty biscuit wrappers. He says the room is out of bounds. He and his double watch a nature documentary and argue about how human beings interfere; they equate Ruby’s presence with that of a cameraman encroaching on the order of the natural world.

Norma decides to hire Ruby full time and offers Karl’s services in driving her home. It’s a task he resents, and he spends the whole time sulking. In a supermarket, he ferrets around for his own dinner, since he doesn’t like the fish pie Ruby made, and while there he picks up even more biscuits. He drops one in the car and almost crashes trying to retrieve it. 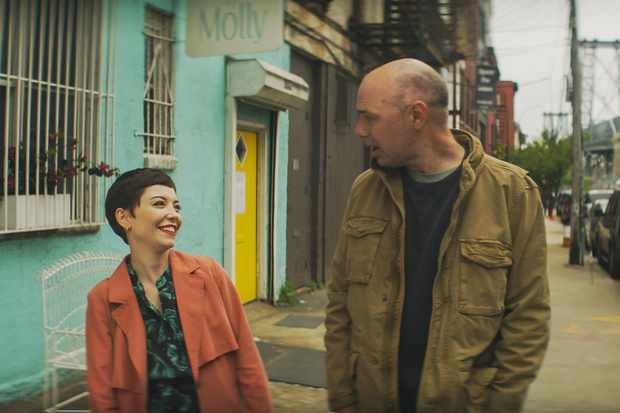 Karl’s biscuit fascination is part of a burgeoning neurosis in Sick of It Season 2, Episode 1. In the house, he replaces the doorknobs with ones that lock so that Ruby can’t get into his room, which gives Norma an opportunity to lock his biscuits in hers, so he can’t get at them. Apparently Ruby told Norma that she used to eat biscuits when she was unhappy, and she thinks Karl is doing the same.

When Karl takes Norma to the doctors, as he always does, he finds Ruby already there. She goes inside to meet Norma’s doctor while he waits in the car, spending the time rooting around for the dropped biscuit and finding it covered in fluff and debris. His inner-self suggests forgetting all about women and just striking up a promiscuous relationship with the biscuits, trying different shapes and sizes every night.

At a bit of a loss, Karl goes to meet the other interviewee again on the pretense of her getting to know Norma, but she susses him out when Ruby and Norma go past on their own pedalo. She’s furious and charges Karl for her time, only exacerbating his sense of worthlessness and embarrassment.

In a funny but ultimately kind of tragic scene towards the end of Sick of It Season 2, Episode 1, Karl honestly considers eating the mucky biscuit from the car, getting into a todo with his inner-self about it. Trying to figure out how to prove his usefulness to Norma, he sets off driving to the doctors, trying to beat Ruby there in order to pick up Norma’s new pills. He gets there first, but since they need to be signed for by a carer, the receptionist won’t release them to him. When Ruby arrives, she’s told they need to be picked up from somewhere else. She doesn’t know the location — but Karl does. He enthusiastically offers her a lift, having figured out a use for himself after all. He knows his way around.