The penultimate part of Deadwater Fell proved it to be the year’s stand-out drama so far, with twists and turns aplenty.

The penultimate part of Deadwater Fell proved it to be the year’s stand-out drama so far, with twists and turns aplenty.


This recap of Deadwater Fell Season 1, Episode 3 contains spoilers. You can check out our thoughts on the previous episode by clicking these words.

While I still can’t say that we’re any closer to learning who really killed Kate (Anna Madeley) and her children, or indeed if they were killed intentionally at all, the penultimate episode of Channel 4’s standout drama certainly revealed plenty. Coming out of it the worst was, I think pretty inarguably, local GP Tom (David Tennant), still a prime candidate for murder, but at the very least a controlling, mentally abusive serial philanderer.

It isn’t just putting it about to Kate’s friends, but taunting her about doing so while trying to basically force himself on her – “Did you come? Jess came when I f*cked her” – and constantly feeding her a cocktail of brain-numbing pills. The jury’s still out on whether that was the first Anna had heard about the affair, but either way, it certainly wasn’t a secret to Tom.

Tom’s inability to see past his own nose is a running theme in Deadwater Fell Episode 3. He seemingly takes pleasure in the fact the women he targeted – Jess (Cush Jumbo) and Sacha (Seline Hizli) – were those closest to her, and how deeply personal she finds that. And he isn’t interested in moderating how he speaks to his wife in front of his presumably long-suffering mother, Carol (Maureen Beattie), who quite clearly knows exactly what he’s like and is fearful of him.

When you see Tom behave this way, the eagerness to get him behind bars is overwhelming, so you can see why Steve (Matthew McNulty) would be willing to coerce a witness into a damning testimony just to see how his smug face looks in orange. Now that the truth is out about Tom’s affair with Jess, it’s even more of a motivation to see his former neighbour put away. In a stellar interrogation scene that would later come back to bite him, Steve sprang a trap on Tom, revealing that he had been seen chasing his daughter through the woods 15 minutes before the fire – enough to contradict his testimony thus far and land him, albeit temporarily, in custody. 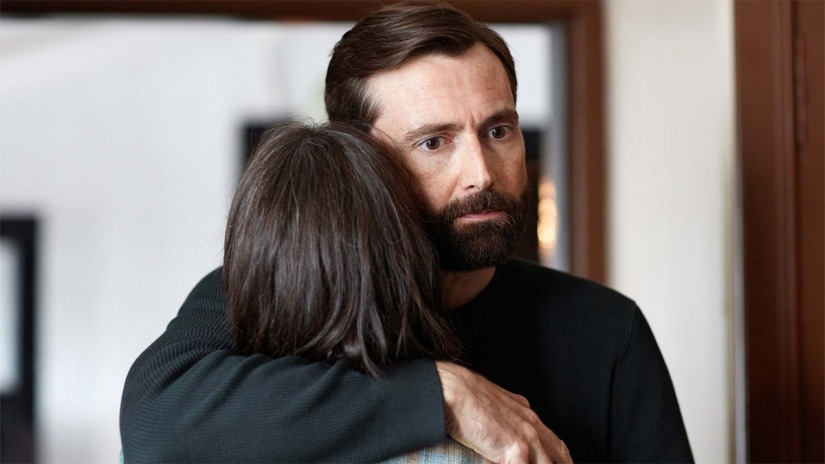 Seeing Tom in custody, gradually unravelling, was great fun. It was perhaps less enjoyable for his solicitor, Nicky (Anneika Rose), who reminded him of the evidence against him and the potential motives – most of them financial – that lent credence to the idea he was guilty, only to receive abuse in return. But watching that solitary tear crawl down Tom’s face when his own mother stood him up during visiting hours was definitely worth it.

The problem in Deadwater Fell Episode 3 is that thanks to the illegitimacy of Dylan’s (Lewis Gribben) statement, Tom can’t be kept in custody. It’s the straw that broke the copper’s back as far as Steve’s concerned. He’s already suffering through counselling, making clumsy passes as his superiors, and experiencing panic attacks in locked rooms – the surrendering of his badge proves a bit too much, and he ends up attacking Dylan, getting high as a kite on his drugs, and wandering around barefoot, screaming at the ocean.

See, Steve has another problem. In a flashback, we see how, in the aftermath of Kate flipping her car and failing a breathalyser test, she confessed to him that Tom was drugging her and that one day she’d wind up dead. He told her to get a grip. In his mind, all of this was preventable.

Deadwater Fell Episode 3 ends with Carol emptying her Post Office savings account, one assumes to settle Tom’s myriad debts and being greeted by his surprise return home. He’s free – and just in time to see his own mother turning against him. What happens next is anyone’s guess, but you have to imagine it’ll be fun finding out.