Hope proves to be the real killer in “And Then He’s Gonna Shoot Off…” as more crises befall the Avenue 5.

Hope proves to be the real killer in “And Then He’s Gonna Shoot Off…” as more crises befall the Avenue 5.


This recap of Avenue 5 Season 1, Episode 2, “And Then He’s Gonna Shoot Off…”, contains spoilers. You can check out our thoughts on the previous episode by clicking these words.

Quotes about hope and its absence are hardly in short supply; this state is, so various sayings go, real Hell, real despair. But Avenue 5 Episode 2, “And Then He’s Gonna Shoot Off…”, is crueler even than that. It isn’t about the absence of hope, but the regular reappearance of hope that is continually dashed again and again and again.

Hope comes from different places and takes different forms. Ask an engineer how long this new interstellar journey might take, and you might be told six months or three years or anything in-between, depending on whether you ask Billie (Lenora Crichlow), the only person in this show who seems to know what they’re doing, or Cyrus (Neil Casey), whose sole job seems to be trying and failing to upstage her. The gravity keeps turning on and off without much warning, and a passenger who died in the premiere is consigned to a luxury golden coffin which, rather than being shot peacefully into space, falls into the ship’s orbit and continues to rotate around it, slowly passing the window every hour for all the survivors to see. 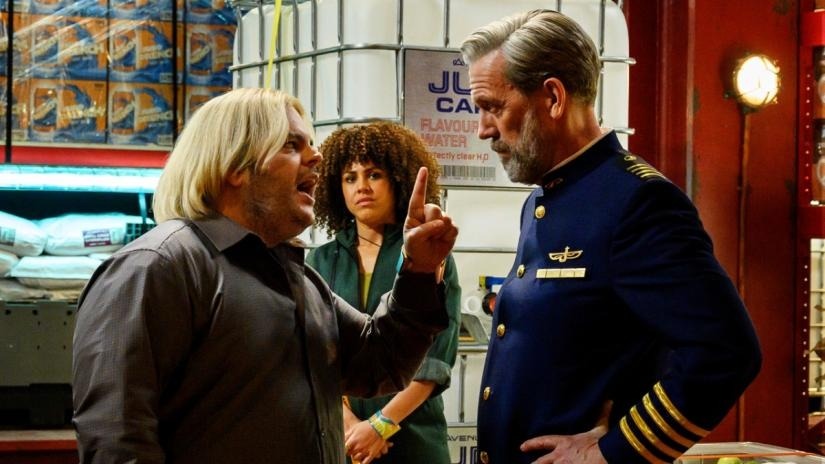 Unhappily married Mia (Jessica St. Clair) and Doug (Kyle Bornheimer) seem like a metaphor for the entirety of Avenue 5 in “And Then He’s Gonna Shoot Off…”. They’re trapped together in the most ridiculous of circumstances and in the worst possible hands. The attempted crisis management of someone like Karen (Rebecca Front) is symptomatic of the worst kinds of attention-hungry can-I-see-a-manager-please busybodies, and Iris (Suzy Nakamura) frantically trying to keep Herman Judd (Josh Gad) from creating more and more crises – including the squashing of various suffering chickens – is all of us with one of those off-the-rails idiot friends who just can’t keep their mouths shut. And if you don’t have one of those friends, by the way, it’s probably you.

Being surrounded by so many hopeless morons is good for someone like Billie, and to a lesser extent “Captain” Clark (Hugh Laurie), who in Avenue 5 Episode 2 continues to fulfill a faux-leadership role in large part because he’s the only one with a nice uniform. The dynamic between the precious few functioning humans and the angry idiot mob is one of this show’s consistent pleasures, as is the playground-style spread of gossip which here travels from an engineer to Clark to Karen to the entire ship, and from Judd straight to the unbelieving ears of NASA, with whom he ruins a meeting because he’s so keen not to pay for their services in getting the ship back home.

During those NASA negotiations, Rav (Nikki Amuka-Bird) remains a perfect go-between, and the communications delay gag might be funny forever. Also funny: Billie telling Clark that the injured passengers are no longer injured because they’re dead. It shouldn’t be funny, obviously, but that’s the absurdity and beauty of a show that mines its laughs from colossal failures and tragedies. With NASA now unwilling to help, and a corpse in orbit and several more passengers being jettisoned in lightweight caskets that will hopefully clear the ship’s gravitational pull, you have to laugh – if you didn’t, you’d probably cry.

Naturally, at the end of Avenue 5 Season 1, Episode 2, those caskets hit the doorframe on the way out, and the bodies spill out into space.