“Debbie” hones in on the manic officer with mixed results as Jake and Rosa go undercover to foil her.

“Debbie” hones in on the manic officer with mixed results as Jake and Rosa go undercover to foil her.


This recap of Brooklyn Nine-Nine Season 7, Episode 5, “Debbie”, contains spoilers. You can check out our thoughts on the previous episode by clicking these words.

Following on directly from the last-minute cliffhanger ending of last week’s otherwise knockabout “The Jimmy Jab Games II”, Brooklyn Nine-Nine Season 7, Episode 5 hones in on the absurd shenanigans of manic patrol officer Debbie Fogle (Vanessa Bayer). While more a direct continuation than a true two-parter, the last two half-hours of the show feel of a piece with each other, both wrapped up in the ripe short-term oddness of this wacky new addition to the Nine-Nine.

The best idea of “Debbie” is that everyone figures out who nabbed the drugs and guns from the precinct’s evidence locker pretty much immediately, leaving the rest of the episode to be divided up between an ad-hoc undercover assignment for Jake (Andy Samberg) and Rosa (Stephanie Beatriz), who con Debbie into believing they’re both in the employ of the same notorious drug lord she’s working for, and an attempt by the rest of the precinct to figure out what Debbie’s next move is, which mostly takes the form of Amy (Melissa Fumero) and Holt (Andre Braugher) speed-reading her exhaustive collection of journals. 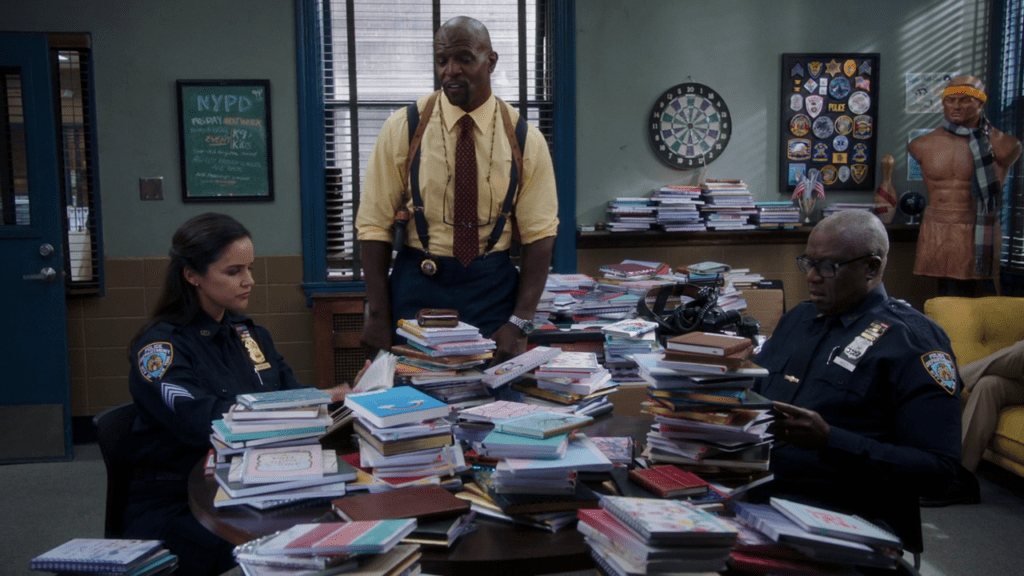 All of this is funny; the silly, nerdy speed-read-off B-plot is particularly entertaining. But the A-plot of Brooklyn Nine-Nine Season 7, Episode 5 is something of a mixed bag, with Debbie being so surreal that she frequently comes across as too much of a caricature even for this show. And there’s some nebulous point being made about how all Debbie really needs is sympathy and understanding, which I’m not sure takes – by the time Debbie has gotten coked-up and taken Jake, Rosa, and her awful mother (Christine Estabrook) hostage, her eventually being won over with a bit of sincerity seems far-fetched and ill-fitting.

Still, there’s loads to laugh at along the way, including Jake attempting to feign a romantic connection to lower Debbie’s guard, which includes some choice words about Amy’s hygiene which have a funny payoff, and a bleeped-out bit about Mr. Bean. (The censored profanity is a gimmick that the episode uses a lot, and it’s better each time.) Back at the precinct Holt and Amy’s childish competition gets at what works best about both of them as characters, even if we seem to have forgotten about both Holt’s demotion and the fact Debbie is his partner, and also that Charles (Joe Lo Truglio) inadvertently caused her to turn to the dark side. I’m all for the show leaning on more serialized elements, but it can’t pick and choose which things to remember – or it at least can’t be so obvious about it.