“Witch Day” forces the townsfolk to reckon with an uncomfortable history, and resist their worst impulses.

“Witch Day” forces the townsfolk to reckon with an uncomfortable history, and resist their worst impulses.


This recap of Duncanville Season 1, Episode 4, “Witch Day”, contains spoilers. You can check out our thoughts on the previous episode by clicking these words.

Duncanville Episode 4 feels as though it has more on its mind than usual, which I suppose isn’t much of a compliment. Nevertheless, “Witch Day”, set during the annual Witch Day carnival in which the townsfolk celebrate burning innocent young women at the stake, was a silly enough attempt to poke fun at America’s chequered history to be enjoyable.

Witch Day is, apparently, “about fantastically rooting out the evil inside ourselves and killing it.” The way this is done is by writing a deeply-held secret on a post-it note and placing it inside a witch effigy to be set alight by the town virgin.

The carnival is a big deal for the kids — Duncan (Amy Poehler) and his friends are fascinated by the carny lifestyle, Kimberly (Riki Lindhome) thinks she’s going to meet the love of her life over mustard, and Annie (Poehler) and Jack (Ty Burrell) plan to win a chilli-making competition by stealing frozen portions from the multiple-time champion and reverse-engineering it.

It’s mostly all very silly, but there’s a note of seriousness when the kids discuss the whole occasion at school and Mia (Rashida Jones) is the only one who seems to have any knowledge that the festival is commemorating violent misogyny and hatred. Even the teacher says the occasion is really just a paid holiday to him. This refusal to reckon with history has a note of truth in it, as does the insistence of the townsfolk that the show must go on regardless so that they can continue to enjoy the upsides. When the local virgin is discovered to be pregnant, a new one is immediately chosen at random — and it just so happens to be Duncan. 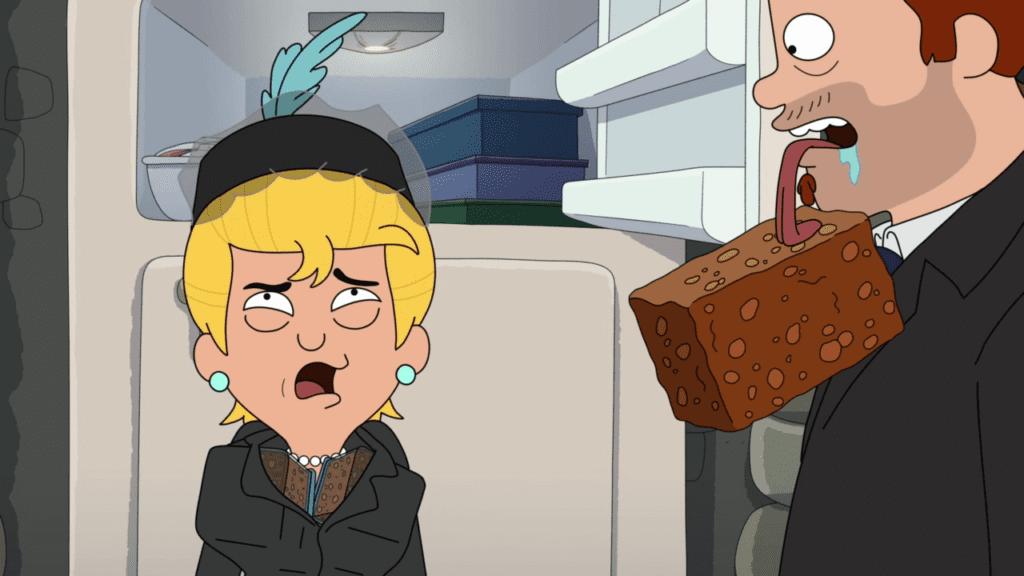 Duncan is obviously mortified at the prospect of being honored in this way, so he and his friends plot to steal the witch effigy and replace it with Bex (Betsy Sodaro, great here). When they’re discovered they’re forced to go on the run with the entire town pursuing them, and Duncan fantasizes about a post-apocalyptic future in which he and Mia are an item. Teenage boys will forever be teenage boys.

Jing (Joy Osmanski) quickly sniffs out Duncan, and Annie and Jack are eager to betray him so they can win the chili competition. On-stage, Duncan addresses the crowd about how wrong Witch Day actually is, though he can’t remember most of the points Mia made as to why. The crowd argues that they love their misguided beliefs; even Mia herself thinks the carnival looks pretty fun, so she suggests a compromise: Keep celebrating the holiday, but install an information booth at the carnival so people can learn what it’s all about.

At some point during this kerfuffle, Duncan gets set on fire, Annie and Jack — after some debate — use the chili to put him out, accidentally winning the contest in doing so, Wolf (Zach Cherry) potentially meets his father, and Kimberly is reunited with her long-lost fancy-man just in time to accidentally squirt mustard in his eyes.

All in all, I suppose things end rather well.