This recap of Snowpiercer season 1, episode 2, “Prepare to Brace”, contains spoilers. You can check out our thoughts on the previous episode by clicking these words.

Big news for TNT’s Snowpiercer this week, since it’s now available on Netflix and will be weekly henceforth; on that note, its second episode, “Prepare to Brace”, gives plenty of reasons to keep watching, with some twists and turns in the tale and an exploration further up-train as Layton (Daveed Diggs) continues his investigation into the murder of Sean.

Lots of things going on here in Snowpiercer episode 2: inclement weather, stubbornness from Melanie (Jennifer Connelly), tension between Layton and Till (Mickey Sumner), and so on, and so forth. It makes scaring up leads a bit of a pain, especially since none of the workers seem particularly forthcoming with information. Where better to blow off steam, then, than the Night Car, run by Lena Hall’s Miss Audrey, where Layton can helpfully “meditate” with Zarah (Sheila Vand) after some potent reminiscing. Zarah’s lips are loosened, so to speak, and she shares that Sean was a snitch for Mr. Wilford and had been promised reproductive priority right before he got offed. 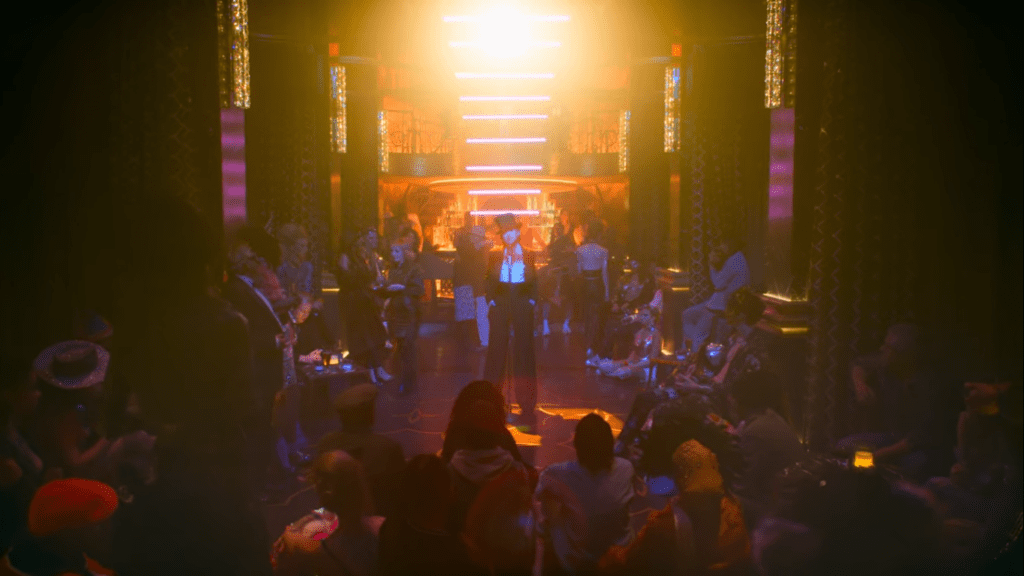 Sean, as it turns out in “Prepare to Brace”, had a particularly unpleasant death. He was tortured and had his p***s chopped off and his arms and legs cleaved away. Who better to do that that a butcher, which is a particularly morbid line of thought, but the train’s speed after Melanie refused to slow down results in a series of disasters that blow out the cattle car windows and freeze its contents solid. Since repairs must be prioritized, and repairs require power, Melanie orders a rolling blackout starting with the tail and the rationing of running water in a very on-trend development. (Both this and the Night Car strike me as the things most redolent of Bong Joon-ho’s nutty version of this material.)

Well, that and the cannibalization, which also comes up in Snowpiercer episode 2 in relation to Sean being chopped up for his meat. But the utilitarian style in which his limbs were hacked off doesn’t mesh with the clearly creepy castration, suggesting the person who killed him wasn’t necessarily the person who chopped him to bits. This is why Layton won’t just pin the murder on the frozen butchers and call it a day – he wants to get to the truth of the matter before any more penises disappear.

Along with the investigation, “Prepare to Brace” also makes time for Layton’s on-going inside-man scheme to help the tail rise up through the carriages. This business helped to put across his resourcefulness and intelligence, even if it hit a bit of a snag. But it’s easy to get behind the tailies, especially since Melanie’s justification for oppressing those at the train’s extreme end in order to keep the whole thing running doesn’t really take. Of course, this generally callous attitude to life beyond those carriages closest to the front suggests that “Mr. Wilford” has an agenda for solving Sean’s murder that extends beyond trite notions of compassion and decency. What did he know that the train staff is worried he shared?