Home » Button It » Call of Duty: United Offensive campaign review – one of the finest ever designed

Call of Duty: United Offensive campaign review – one of the finest ever designed

An all-time great Call of Duty campaign, United Offensive is the rare expansion that manages to improve on its predecessor in every way.

An all-time great Call of Duty campaign, United Offensive is the rare expansion that manages to improve on its predecessor in every way.


This review of the Call of Duty: United Offensive campaign is based on the PC version. It’s a review of the game’s single-player component only.

The Call of Duty: United Offensive campaign is, let’s be frank, one of the finest the series has ever produced. And that’s quite a claim to make of what was essentially just an expansion handed off to another developer, Gray Matter, while Infinity Ward worked on the proper sequel. The pressure to even match the stellar work done on the base game must have been overwhelming, but none of it is felt in the finished product, which, rather than just provide more of the same, refines, polishes, expands, and improves on its predecessor in virtually every way.

The format remains unchanged, though. Across three campaigns, slightly shorter but more intense than their vanilla equivalents, players pilot three unremarkable Allies – an American paratrooper, a British commando, and a Russian infantryman – through cinematically-inspired offensives throughout the European theatre. It’s obvious from the first of these, the Siege of Bastogne during the Battle of the Bulge, that United Offensive isn’t playing around. It makes no effort to ease you in. It’s bigger, it’s bolder, it’s more chaotic, and it doesn’t care how you feel about any of this. The opening is fraught with such hair-raising madness that it eclipses almost anything in the original campaign right out of the gate, and never slows down from there. 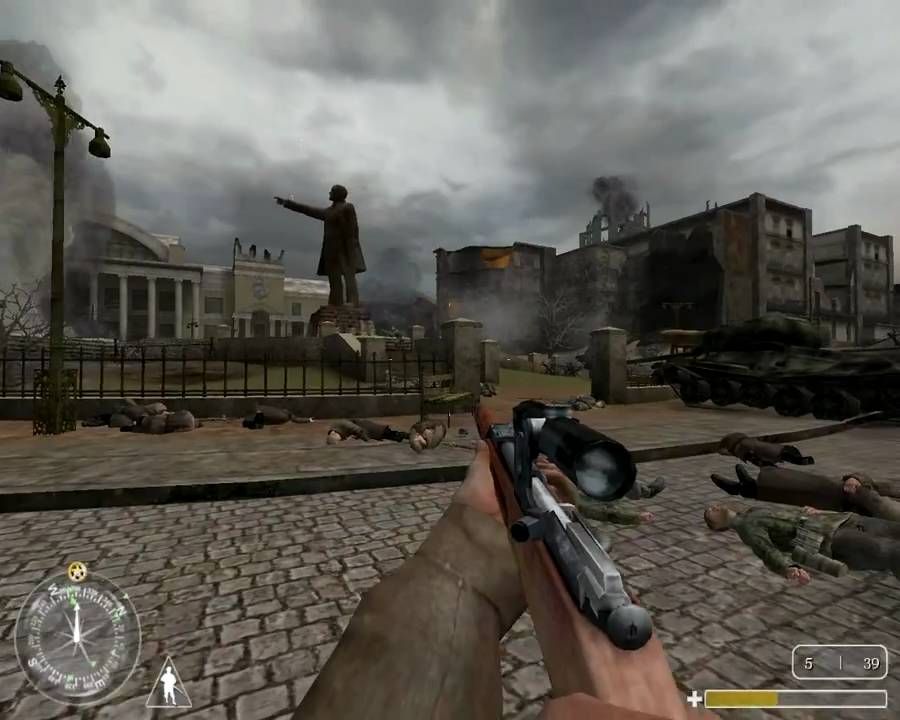 Well, I suppose it does, actually, but only by design. The British campaign, which is flanked by its more grandiose American and Russian equivalents, turns down some of the bombast in favour of a more intimate clutch of missions tasking the player with sabotage behind enemy lines. It does, admittedly, open with a sequence set aboard a B-17 Flying Fortress bomber which is really, despite its great presentation, just an on-rails turret sequence, but it quickly puts boots on the ground for a Guns of Navarone rip-off that tasks the player-character, an SAS Major, and the Dutch Resistance, with demolishing coastal guns in Sicily. It’s interesting to note, whether it represents a dearth of imagination or not, Call of Duty always seems at its best the closer it hews to its obvious influences.

That having been said, the Russian missions aren’t so clearly inspired, and it’s in those that the Call of Duty: United Offensive campaign reaches a fever pitch. Nothing is strictly new here, but the chaos is turned up to an extent that seems designed to stress test both the player and the rickety Quake III engine; neither comes out unscathed. It amounts to the climactic takeover of a rail yard that is hellish for Veteran players and still stands out as one of the most punishing missions in the series’ history. 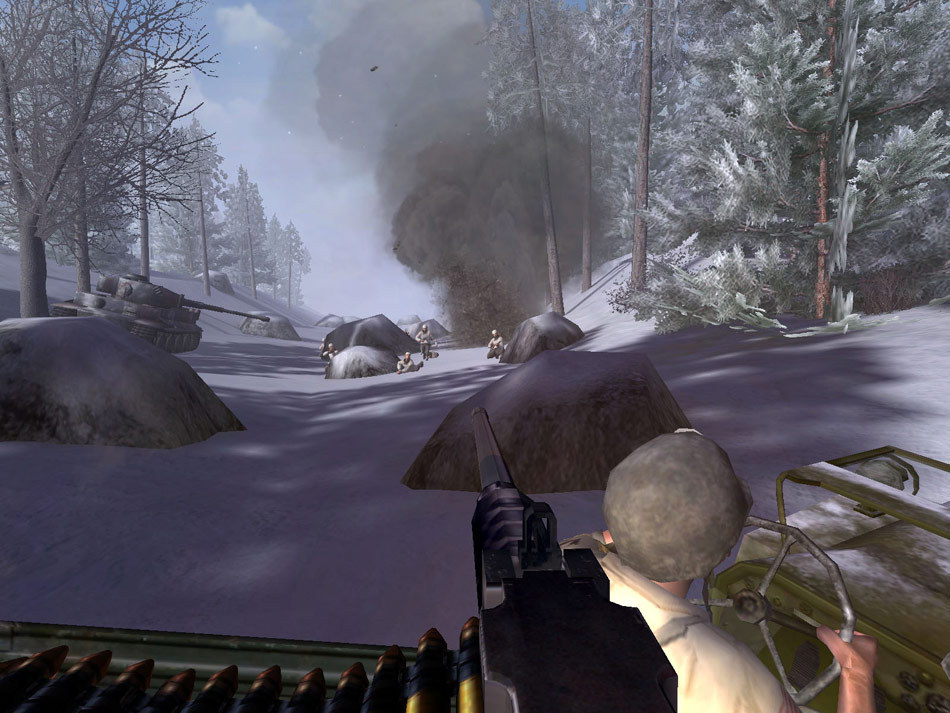 The whole thing’s harder, though, and unashamedly so. It isn’t a long campaign, but it can be a gruelling one, with some steep difficulty spikes and no mercy whatsoever for players who’re blasé about its increased number of infantry and armoured vehicles. Some additions seem designed to take the edge off, including a sprint function – which would be curiously absent from Call of Duty 2 – and semiautomatic rifles, as well as hefty machine guns that spew out rounds like nobody’s business but require the player to go prone in order to use. Sometimes even all this scarcely feels like enough, though, but the gloves-off approach feels right for an expansion that prides itself on ratcheting up the intensity of an already stressful shooter.

With some new visual effects that topple trees, turn clumps of earth upside-down and shake the very foundations of a pulse-pounding framework, the Call of Duty: United Offensive campaign proudly embraces its overwhelming sensibilities. It’s the rare follow-up – and an expansion, no less, not a sequel – that truly improves on what came before, and in so doing it delivers an all-time great single-player experience. While current fans might well have missed this still PC-exclusive outing, there’s no excuse these days; any computer that switches on will run it. Just don’t expect to stop playing as easily as you started.

1 thought on “Call of Duty: United Offensive campaign review – one of the finest ever designed”