The finest Spider-Man game ever made, and a superhero sandbox instant classic, just let down by some less-than-spectacular open-world content.

The finest Spider-Man game ever made, and a superhero sandbox instant classic, just let down by some less-than-spectacular open-world content.

Insomniac’s Marvel’s Spider-Man, which is admittedly a bit of a mouthful, only gets, like, two things right – really right, anyway. There are lots of things, most of them smartly lifted from other open-world superhero simulators, which it serviceably repurposes: the rhythmic combo-chasing combat and sneaky, stalky stealth sequences from the Batman: Arkham games, the enticingly color-coded collectibles from Crackdown, the towers from Assassin’s Creed and all of Ubisoft’s other interminable sandboxes. None of them really stand out, though. It’s just the two things that do. The first is the swinging. The second is that Marvel’s Spider-Man just gets Spider-Man, as a character and a cultural fixture. I can’t imagine a game that caters to longstanding fans better than this one.

But blimey, that swinging is amazing. I certainly can’t articulate what it feels like in words, and I don’t even think watching footage would get the point across either. You have to feel that sweeping sense of vertigo when Spidey first plummets out of a high-rise window, which happens right at the beginning in a wonderfully smug transition from cut-scene to gameplay. Few games open better. Spider-Man swoops, swings, and sails through a compact, characterful version of Manhattan in lovely, momentum-conscious animations. You move through virtually all of the game like this, and it never gets boring.

You have to imagine Insomniac knew they were onto a winner with such an elegant, satisfying system, which is presumably why it isn’t just a means of traversal but a core component of all the game’s set-pieces, boss fights, and open-world activities as well. That most of it is controlled with just one trigger and gravity feels like a minor miracle. There’s more to it, obviously, depending on if you want to air-dash, leg it up the side of a building or slingshot from a perch in mid-flight, but writing it out would be making it more complex than it deserves to be. In your hands, it’s intuitive and natural, almost always. Often the game seems to know what you’re planning even before you do.

That spider-sense is fitting since the rest of the game is equally rooted in an understanding of and affection for Spider-Man’s long, storied multimedia history. Before he leaps out of that window, Peter Parker, here single and a few years deep into his crime-fighting career clumsily dons his suit in a pokey apartment stuffed with all the things you might expect to find there: dissembled gadgets, newspaper articles of his showdowns with various iconic foes, a photograph of him and Aunt May, little contraptions he has designed to make his home life easier. It’s everything you associate with the character bundled into one scene. He’s a secret superhero and a scientific genius, but he’s also a bit of a slob, a bit disorganized. There’s a dead plant on the windowsill. A later story mission involves him tracking a garbage truck around Manhattan because he forgot to pay his rent and his possessions got binned. Insomniac hasn’t just applied this kind of character to the incidental details, though – when Peter leaps out of that window, he takes almost sixty years of his own history with him. 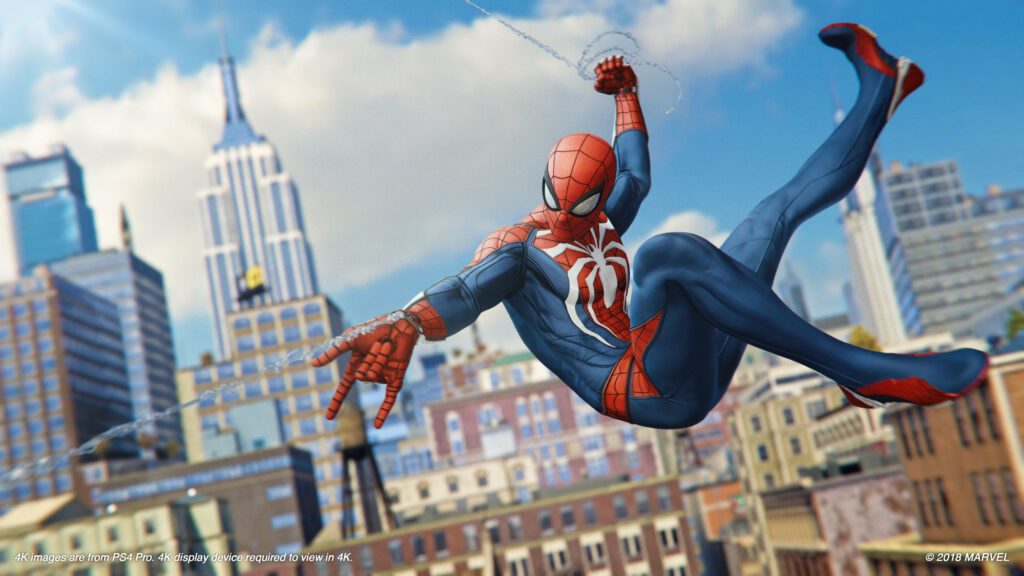 And you can see it everywhere. All of the game’s substantial interior spaces, which include the lab of Dr. Otto Octavius, where Peter works, and the charitable F.E.A.S.T center, where Aunt May volunteers, all boast the same attention to detail, but what truly defines them is how cluttered they are with nods and winks for the benefit of web-heads. Manhattan is the same. One of the collectible side-quests tasks Peter with recovering backpacks that he has webbed-up in various out-of-the-way locations over the years. Each one contains a trinket from his many adventures that fans, even casual ones, will delight in. You’ll be compelled to find them all even if you aren’t an impulsive 100%er.

Marvel’s Spider-Man does seem to encourage that kind of player, though, which is really the source of its most pernicious problem. Insomniac is very good at giving mundane open-world content a Spidey-centric reason for being, but that can only go so far. Activating police towers to stuff the map with icons isn’t any more interesting here than it has been anywhere else, even if swinging between them helps to take the edge off. Some fan-favorite characters have chains of side missions that basically amount to doing the exact same thing a handful of times, waiting for a slightly different outcome – the definition, it’s worth mentioning, of madness. Procedurally-generated random crimes and multiple-wave base takeovers are the lowest common denominator of low-effort open-world fluff. Even those backpacks, for all their on-brand charm, are just collectibles.

You could skip all this, but it’d be tough to justify doing so since it all feeds into the game’s token-based internal economy, which allows for investment in new suits plucked from everything from obscure comic runs to blockbuster movies, modifications for those suits, and web-based gadgets that have various uses in combat and stealth. Those gadgets, which largely work in the same way as their Arkham counterparts, are great fun if a little overpowered – spamming them got me through New Game+ on Ultimate difficulty with fewer hiccups than I experienced during my first playthrough on the surprisingly unforgiving Normal. Spider-Man’s relatable vulnerability promotes giving some thought to the suit mods, which allow you to tailor a more specific playstyle. Suddenly, the optional content is almost mandatory.

This isn’t a problem unique to Marvel’s Spider-Man, but it’s a problem that Marvel’s Spider-Man has nonetheless. Luckily it’s one of the few major ones, and even then it’s offset by the sheer strength of its core mechanics. Swinging is, as stated, endlessly pleasurable, but the combat also makes a case for itself. It isn’t as tactile and hefty as the system it borrows from, but that’s about right for a lither, more nimble character. Where icons once appeared over the heads of attacking enemies, prompting a need to counter, now they appear over Spidey’s head, his senses tingling, prompting a need to dodge. And dodge he does. Once you get used to the rhythm and timing, you’ll have no problem sliding between an enemy’s legs, launching them for a juggle combo, swinging into another assailant, zipping up to a lamppost, and launching various bits of scenery into crowds – that last bit, for what it’s worth, never gets boring either. 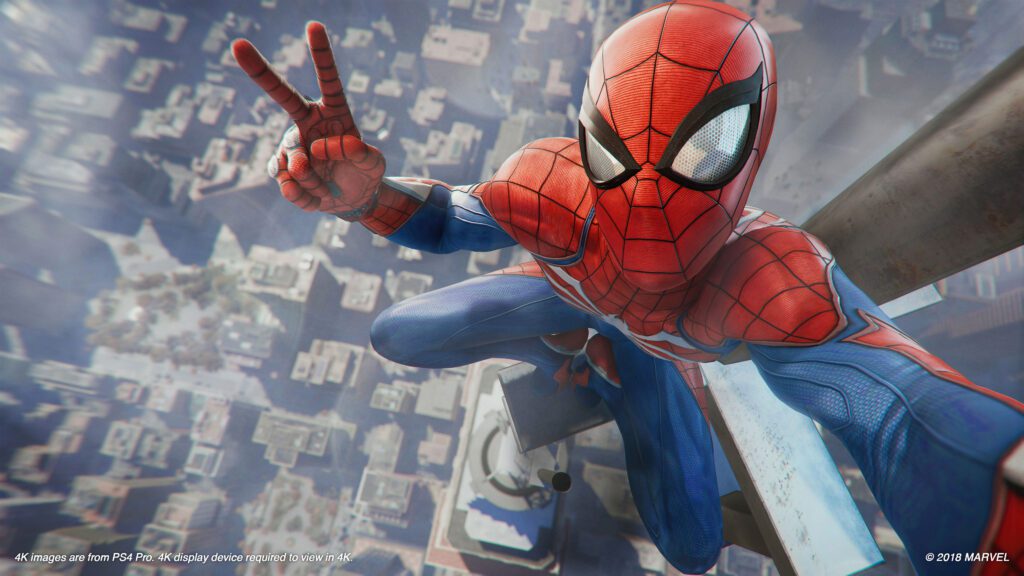 This could probably stand to be more precise; it’s easy to take an errant bullet or left hook that you probably should have avoided, all things being fair. But it’s difficult to get annoyed with it since it’s so distinctly Spider-Man, so deeply rooted in his upbeat twenty-something sense of self, and so informed by the context of his media-spanning adventures. The whole game’s like that. The story, which is kick-started by the incarceration of the Kingpin, leaving a power vacuum in New York that various factions compete to fill, is as earnest, surprising, and increasingly bonkers as any of the best in Spidey’s canon. If only all those factions didn’t bring another wave of bland ancillary content with them.

And if only, while we’re on the subject, the story missions didn’t occasionally give the player responsibility for Mary Jane Watson or pre-bite Miles Morales in mandatory instant-fail stealth sequences that feel like transplants from a different game entirely. It’s hard to say what Insomniac hoped to achieve with these, especially since the rest of the story content, aside from being hilariously foreshadowed, is strong. There aren’t enough of these sections to really worry about, but then again I suppose that only raises more questions about why they’re present in the first place.

Fortunately, the same can’t really be said of anything else in Marvel’s Spider-Man, which has its share of bland filler but at least has the decency to dress it up as something integral to Spider-Man’s history and identity; safe, largely borrowed game design given a jolt of character and context. You’d be surprised how powerful that is. The end result isn’t flawless, but few things are. What it is, though, is an extremely distinguished variety of superhero sandbox game, and, I think pretty inarguably, the best Spider-Man title ever. If you’re a fan, what more could you want? And if you’re not, Insomniac has made a strong case here that you should be.