Home » Button It » Marvel’s Spider-Man: The City That Never Sleeps review – a mixed-bag post-script with an annoyingly essential narrative

Marvel’s Spider-Man: The City That Never Sleeps review – a mixed-bag post-script with an annoyingly essential narrative

The City That Never Sleeps effectively fleshes out its secondary characters and tee’s up an inviting sequel, but it’s wrapped in a gnawingly repetitive package.

The City That Never Sleeps effectively fleshes out its secondary characters and tee’s up an inviting sequel, but it’s wrapped in a gnawingly repetitive package.


Marvel’s Spider-Man has been reasonably well-served by its post-launch content, which included a free New Game+ update – let’s be frank, it should have been there anyway – and a three-part story-focused expansion collectively titled The City That Never Sleeps. Accessed rather unintuitively through a menu that swaps the base game’s icon-strewn Manhattan for a DLC-specific version full of new random crimes and uninspired side content, it’s only the new story missions, which effectively flesh out some mistreated secondary characters and tee up an inviting sequel, that justifies the price of the Season Pass.

The key question is whether or not most of this could have been folded into the main game rather than being stretched across three empty-feeling packages and it’s hard to imagine an answer other than yes. While “The Heist”, “Turf Wars” and “Silver Lining” all contain strong character work for Black Cat, Yuri Watanabe, and Silver Sable, as well as the logical continuation of Peter’s relationships with MJ and, most importantly, Miles Morales, they’re also all bogged down by repetitive open-world busywork, including a grating side-quest devoted to Screwball’s hip live streams that is tortuously extended across all three segments.

None of the core gameplay or structure has been altered in The City That Never Sleeps, so it really sells itself on its narrative. And despite the foregrounding of a bland, lesser-known antagonist, I’d suggest that the arcs of Yuri and Miles – though both mostly remain off-screen – are going to be pretty essential threads winding all the way to a sequel. The stakes and scope of the main game’s tale aren’t really present here, but not necessarily to the story’s detriment since it works on the strength of its intimacy and the state of Manhattan in the brief time that has elapsed since the climax of Insomniac’s superior superhero outing.

While “The Heist” revolves largely around Black Cat, it’s really setup for the latter two episodes, “Turf Wars” and “Silver Lining”, which take the cranially-blessed mob boss Hammerhead and turn him gradually more ridiculous as an excuse to set Yuri on a darker path and largely redeem the stoic Silver Sable. This is welcome stuff since Yuri had little to do in the base game and Silver Sable exited it without much ceremony, and I like to see Hammerhead’s transition from bland mobster to something more outlandish and comic-book-y as a joke at the character’s expense – or at least at the expense of second-string supervillains in general. 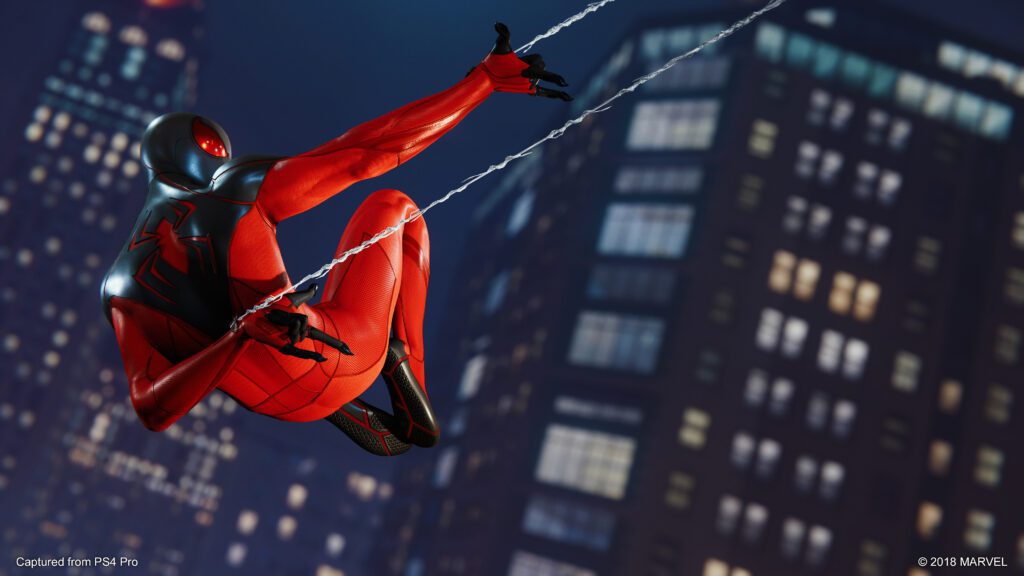 There are plenty of people who wanted more of this game, but I can’t imagine the bits they wanted more of were the interminable multiple-wave base takeovers or the procedurally-generated random crimes, which form the bulk of what The City That Never Sleeps provides. There are some new varieties of enemies to contend with, including a hulking brute with a giant Gatling gun, but while these guys make the gameplay harder – the latter two episodes of the expansion are more challenging than anything in the vanilla game – they don’t necessarily complement the combat system in doing so. Options for dealing with those big boys are limited, so I eventually became so fed up with them that I’d either hoard Focus to dispatch them instantly or stun-lock them with electric webs. Rather than a fun new challenge, they were mostly just an annoyance, as were the zooming guys with jetpacks who never seemed to pay much attention to my dodges.

All this without any new gadgets or combat tricks just felt like more of the same, and while the swinging remains as wonderful as ever, brawling started to get a little creaky under this kind of stress, and the thoughtless side activities were tests of patience. I 100%’d all three sections of the DLC, perhaps against my better judgment, and most of them felt like a chore.

There are probably six or so hours of content here, less if you only count the meaningful bits, and the extent to which that’ll constitute good value depends on your enthusiasm for the unchanged core mechanics and your desire for a trail of narrative breadcrumbs leading directly to a follow-up. I’d hesitantly call the strong character work done by Marvel’s Spider-Man: The City That Never Sleeps essential for those who very much enjoyed the base game, and I count myself among those people, but I can’t help but wish it wasn’t all wrapped up in a package that highlights the worst of what that game had to offer.