This is the first in a series of articles recommending classic comics that you should probably reread now you’ve got some time on your hands. First up: Daredevil: Born Again.

Frank Miller took on the art chores of Daredevil with issue #158 of the title in 1979. The title was struggling, and Miller got the chance to write and draw the series, and after issue #168 hit the stands, the title started to soar to the point that Marvel switched it to monthly from bi-monthly.

Eventually, Miller moved on and tied up the loose ends from his storylines in issue #191. However, he was to return to the title, and in issue #227 we were graced with the start to an incredible character-changing epic known as Daredevil: Born Again.

It was so influential, that it was used as the basis for the third season of the Netflix TV series.

Without giving too much away, the story starts with a down and out Karen Page, selling the last thing of value that she has: the true identity of Daredevil. The information falls into the hands of the Kingpin, and the stage is set for a downward spiral for Matt Murdoch.

The Kingpin slowly unravels Matt’s life, and instead of just sending a team of assassins to take Matt out, he decides that there would be more satisfaction in seeing Matt discredited and destroyed, so he starts a campaign of hate against our hero, freezing his assets, causing him to be disbarred and eventually destroying his home.

Born Again was like nothing we had seen in the book before.

Miller slowly takes the character apart, distancing him from everything that he was once associated with and turning the screw tighter and tighter as the issues progress. We can only be thankful that social media was not around, as Matt would have been canceled even quicker.

Matt is reduced to a shell of a man, living on the streets, suffering a mental breakdown and being stabbed and attacked by common street thugs, leaving him close to death. 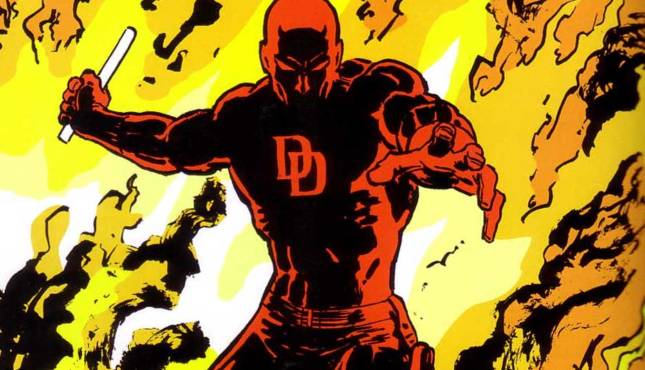 It is difficult to watch how far he falls, but as the title suggests, it is a necessary process that allows Matt to eventually be born again and forcing the Kingpin to drop the subterfuge and give Daredevil an opening he can use to bring the criminal down.

Miller teams up with artist David Mazzucchelli for this run, a pairing that will come up again in Batman: Year One.

This epic tale of redemption and overcoming incredible odds is a level of storytelling that the title very rarely saw, proving that Miller had true respect for Daredevil.

The focus is very much on the characters from the title such as Matt, Foggy, Karen, and reporter Ben Urich, fleshing them out, making them three-dimensional, and exploring their relationships with each other.

The pacing is slow at first, building as the tension mounts before we get a literally explosive conclusion at the end of the arc. Revelations about Matt’s past and his supporting cast draw you into the events as they unfold.

On the downside, the first issue of the story is a little too quick to dismantle Matt’s life. It could have taken a second issue to show Matt’s descent. Things escalate very quickly, and I feel that more tension could have been created by letting the first act breathe a little. The conclusion also feels a little over-inflated; the final battle is very much in the style of a more traditional Marvel book, including cameos from The Avengers, but comic books will be comic books after all.

Daredevil: Born Again is a masterpiece in both art and story, and one of a few instances where story and art fit like a hand in a glove.

If you have never read this arc, it’s a must-have, and can be found collected in trade anywhere you usually get your comics from.