Godfrey’s character study has pacing issues, but Miss Juneteenth is a star-making vehicle for Nicole Beharie as Turquoise Jones that’s a grounded expression of motherhood you rarely see on screen.

Godfrey’s character study has pacing issues, but Miss Juneteenth is a star-making vehicle for Nicole Beharie as Turquoise Jones that’s a grounded expression of motherhood you rarely see on screen.


Channing Godfrey’s new character study has pacing issues. Still, her film Miss Juneteenth is a star-making vehicle for actress Nicole Beharie (42), who brings a lovely amount of strength and the right notes of tenderness to the role. It’s a tricky piece — one that could settle for melodramatics as a self-conscious way to worry about an audience’s attention span. However, Godfrey’s writing and Beharie’s turn as Turquoise Jones is the kind of grounded expression of motherhood you rarely see on screen.

Beharie, as mentioned above, plays Turquoise Jones, the former Miss Juneteenth and now a single mother. She works two dead-end jobs (pun intended), one for tips and under the table to make ends meet. She is desperate to try to scrape every dollar together to prepare her teenage daughter, Kai (Alexis Chikaize), for the “Miss Juneteenth” pageant to win a full scholarship to any prominent black college in Texas.

The film’s title comes from Juneteenth, a holiday which recognizes the end of slavery in Texas and took an incredible two full years later to be enforced in the remote confederate state (specifically, it commemorates Union army General Gordan Granger announcing in Galveston, Texas, that all slaves were free on June 19th, 1865). The film’s themes carry the weight of a tribute to that period where African-Americans today still feel the hold of racial oppression even though laws prevent it (a simple look at racial, economic disparity will clarify that fact).

The film also has a distinct feel, which is a credit to Godfrey and producer David Lowery, a fellow Texan and director of such films as A Ghost Story, Ain’t Them Bodies Saints, and The Old Man and the Gun that felt authentic to the Lonestar state. 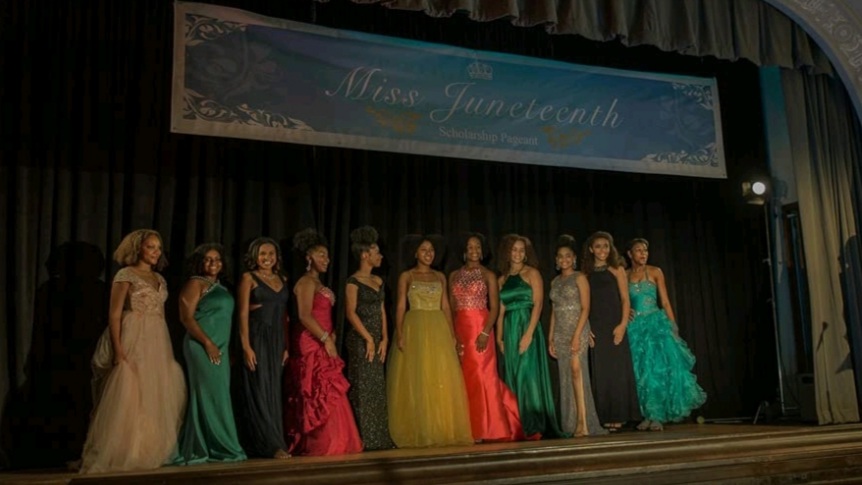 Godfrey’s script has its pacing issues and tends to drag towards the middle of the film’s second act. The ending also left me scratching my head on why someone would make such a poor business decision even though it fits the film’s theme of Beharie’s Turquoise wanting something of her own.

The meal ticket here is the small community moments brought to the film and the mother-daughter relationship. The dynamic between Turquoise and her mother is a timely and relevant one. The fact that she has a side job as a makeup artist at a funeral parlor (hence the pun I mentioned above) is such a fresh and exciting way to show someone struggling to pay her bills. Even the love triangle between her and Ronnie (Kelvin Sampson) and Bacon (Akron Watson) is relevant but never takes away from the film’s main focus and adds texture (Bacon picking up Turquoise on a horse is the sweetest damn thing you may see this year).

As I said above, the relationship between the mother and daughter (in contrast to the alcoholic, abusive one between Turquoise and her mother) is the kind of grounded, authentic expression of motherhood you rarely see on the screen nowadays. Kai will not make some grand speech to change her mother’s strict parenting, nor will Turquoise be able to control her daughter’s growing autonomy. All you can do is try your best, love them as much as you can, and try to guide them on the right path, so they won’t make the same mistakes you did. That’s life.