Perry Mason relishes his new legal career, even if he isn’t exactly a natural, but with the case against Emily Dodson so strong, he requires some outside help.

Perry Mason relishes his new legal career, even if he isn’t exactly a natural, but with the case against Emily Dodson so strong, he requires some outside help.


This recap of Perry Mason season 1, episode 6, “Chapter Six”, contains spoilers. You can check out our thoughts on the previous episode by clicking these words.

After last week’s episode of HBO’s Perry Mason promised to join the dots between the old-school version of the title character and this newer, grubbier reimagining, “Chapter Six” continues in that direction with an hour set almost entirely in court, with the trial of Emily Dodson well underway, and an out-of-his-depth Mason fighting her corner – or attempting to, anyway.

But Maynard Barnes isn’t about to make it easy for him, and that’s if Mason can get out of his own way, which nobody is sure he can. His unopposed opening statement doesn’t go as smoothly as he’d like, and things only get worse from there. A deeply aggrieved Matthew Dodson paints Emily as a filthy harlot who consistently betrayed him and put her lust above the safety of her own child; something which she’s made to look much more guilty of when the motel owner testifies that she and George Gannon left Charlie unattended in an adjoining room while they had sex in another. Perry is fuming about not having been prepped for this and lays into Emily for keeping it a secret to such an extent that Sister Alice later has to chastise him for it.

With so much of the action occurring in court in Perry Mason episode 6, it’s easy to forget that the case largely rests on what happens outside of it. A big part of the picture is connecting Ennis to everything in a demonstrable way, but Pete also digs up more on George which implies at least a financial connection to the church – something for Della to look into. 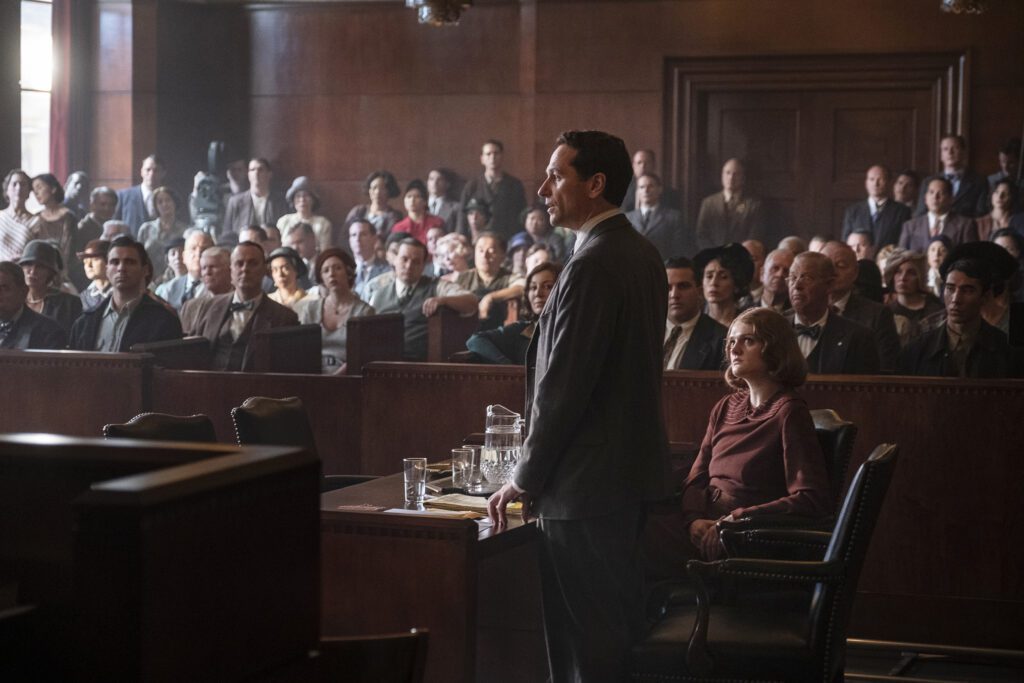 It’s also becoming increasingly obvious that it’s going to be difficult if not impossible for Perry to defend Emily while also preserving his integrity and keeping his promises. One of those promises was to Paul, who helped Perry to determine that George was murdered, but only on the proviso that his involvement was never revealed. Perry elects to keep his word in “Chapter Six”, but Paul recognizes that justice isn’t going to be done without him taking some initiative, and so he deposits the dentures at Perry’s house and plants them within the other evidence so that they can be brought up on the stand. In so doing, despite not involving himself directly, Paul puts himself and his family in enough danger that he insists Clara gets temporarily out of town.

And then there’s Sister Alice, who is still preparing to resurrect Charlie Dodson despite Birdy’s obvious lack of faith. But Emily’s relationship to Sister Alice is also brought up in court when a prison matron testifies that she overheard Emily confessing to Charlie’s murder while talking to the Sister; this sends Emily into a frenzy, not that her outburst does her any favors. There’s a better outburst elsewhere in Perry Mason season 1, episode 6, when Holcomb, crooked himself, nonetheless angrily confronts Ennis about the depth of his involvement in Charlie Dodson’s kidnapping and murder. It just goes to show that there are levels to this kind of thing, and not everybody is on the same one.

“Chapter Six” is kind enough to close with a cliffhanger, in which Perry drives out to an address uncovered by Della, owned by a man named Jim Hicks, who greets Perry on his arrival, explaining that he has been waiting to be found. Since Perry’s speedy transition to a licensed attorney, HBO’s so-called procedural has sped right up, but with so many new revelations and characters coming to the fore with just a couple of episodes remaining in this first season, you have to wonder to what extent this case is going to be wrapped up by the end.