It is a shining light in the comic book world just now and is everything that comic books should be: exciting, gripping, and incredibly readable.

It is a shining light in the comic book world just now and is everything that comic books should be: exciting, gripping, and incredibly readable.

Remember house ads in comics where they would say, “If you only read one book this month, it must be…” fill in the blank? Well, incredibly this is true for the latest Black Label DC title Batman: the Three Jokers.

Long-anticipated, the story by Geoff Johns, with art by Jason Fabok, picks up on long seeded ideas from Johns that suggested that The Joker is not just one person, but there’s three of the rascals out there.

We join the story with Batman returning to his cave, and while Alfred, alive here, tends to his recent wounds, we are reminded quite shockingly of the terrible scars that Bruce has, caused by his encounters with his rogues gallery. It’s a dark montage that highlights that despite how silly his villains may be, they have caused him some awful scarring over the years.

This dark tone permeates the whole of Batman: the Three Jokers #1. This is a violent and disturbing tale that has Batman once again very firmly planted in a world of madness and despair.

The idea of scarred heroes continues, as we get flashbacks to the horrific shooting of Batgirl, and the murder and resurrection of Jason Todd. The Bat-family get together as it seems The Joker is on another murder spree, and behind the scenes, we get to see the three Jokers planning to “make a better Joker”.

I don’t want to spoil much else here, as this book is nothing short of a masterpiece that should be enjoyed cold. 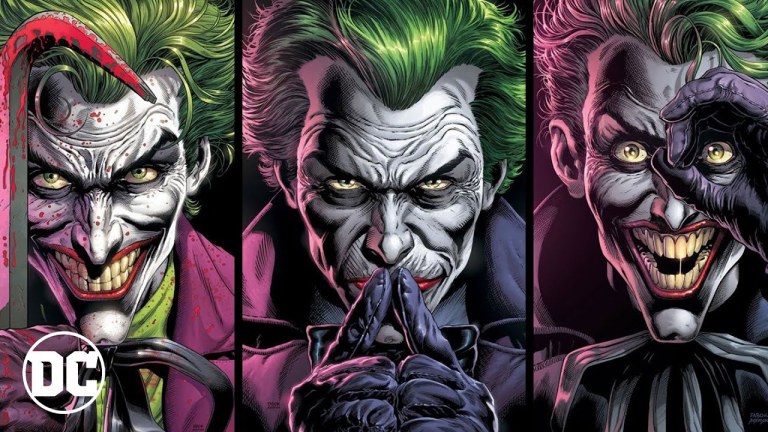 Our heroes are perfectly represented here, with Johns capturing all the characters’ true essence.

The artwork is also magnificent, and there are so many Easter eggs included that after an initial read, you will want to go back, again and again, to see what you have missed.

Johns has borrowed very heavily from Alan Moore and Dave Gibbons’ The Killing Joke, and the plot beats, panel layouts, and page transitions are fully reminiscent of that one-shot.

There are panels that almost replicate images from that book, but unlike Doomsday Clock, it feels earned here instead of just providing fan service.

Batman: the Three Jokers looks set to be a really special Bat book and I urge all Batman fans to get out there and grab this.