Being Scottish, I have a soft spot for films made in Scotland. I still love Gregory’s Girl, I could watch Comfort And Joy right now, and although overrated, Trainspotting did set a high bar. However, Schemers, the latest offering from my beloved country of birth, left me almost mortified.

The story, based on the real-life adventures of three friends from Dundee in the early 80s, including hugely successful music promoter David McLean, is a typical rags to riches scenario, written and directed by Mclean himself. The story follows the lads meeting and wanting to succeed in a business venture that they find themselves almost dropped into.

Young Davie has an unexpected leg break that ends his footballing aspirations but attempts to win the heart of his nurse, by throwing a disco so they can go. When he realizes that there could be money to be made with such ventures, his ambitions get the better of him as he pulls his friends into the world of promotion, culminating in getting Iron Maiden to appear at a show that he and his band of merry men are desperately trying to organize.

The premise of Schemers is a well-worn path, and you can imagine how things start to pan out, but it’s sad to say that it pretty much falls at every hurdle.

I wanted to enjoy this and having Dundee as a backdrop was a welcome change, but it seems that lack of budget and discipline makes this a plodding, dry affair that is almost devoid of any real charm.

Director David Mclean, working from a script he had a hand in too, tries hard to emulate some of the more stylish tricks used in films like Trainspotting. In fact, there is an opening scene of our lead running into a freeze-frame backed with a voiceover a la Trainspotting, but it lacks any real excitement and feels more homage than experimental. 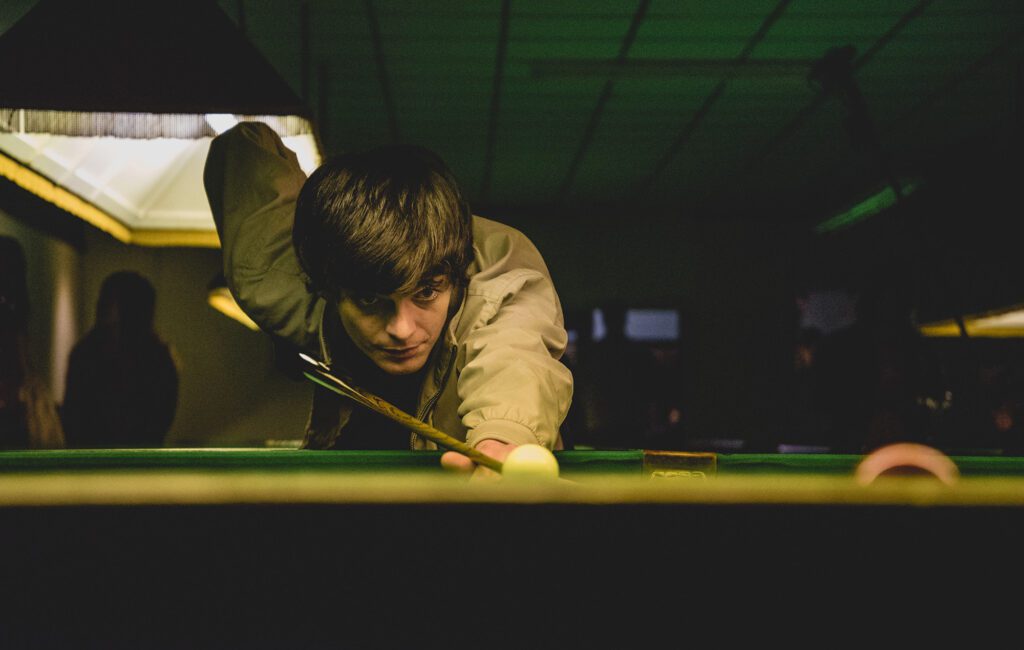 This trend continues, as we get lots of exposition delivered through monologue, eclectic editing and a pretty annoying soundtrack that sadly misses the mark, as the music used fails to conjure up the atmosphere of the decade.

In a film that deals with booking up and coming bands such as U2 and Simple Minds, it’s a shame that there is no real attempt to recreate those early days, and perhaps expensive copyright legalities meant that we never get to hear much of the music that those bands produced at this time.

I was excited to get a fleeting glimpse of The Rezillos, but it was literally a blink-and-miss-them moment, leaving me wondering if it was actually them, pulled out of retirement for a cameo.

The tone of the film veers wildly in the final two acts, as characters make some weird decisions to create drama that seems shoehorned in. There is an illicit affair that comes from nowhere, gangsters that seem to have no real motivation for their actions and the friendship between our three leads is never given any real thought, leaving the audience to wonder why they even bothered to stick together for so long.

Schemers ends with an on-screen overlay that tells us the real-life fates of our cast, and sadly I wished they had maybe filmed the latter parts of their lives instead.

It’s a shame because I really wanted to enjoy this, but it comes across as a production that couldn’t match the story it was inspired by.