Pandora season 2, episode 5 recap – “On A Night Like This”

Xander and Jett go on a boys’ tour of Las Venus in search of Ralen, while Jax’s considerable beauty is put to good use on a secret mission back on Earth.

Xander and Jett go on a boys’ tour of Las Venus in search of Ralen, while Jax’s considerable beauty is put to good use on a secret mission back on Earth.


This recap of Pandora season 2, episode 5, “On A Night Like This”, contains spoilers. You can check out our thoughts on the previous episode by clicking these words.

The cold open of “On a Night Like This” finds Ralen competing in some kind of underground pit fight against an undefeated hero of the Human-Zatarian war, so it’s actually a bit of a disappointment when we switch to a dreaming Jax and Zazie 72 hours earlier. Jax is salty about Xander, who is working with Jett to try and locate Ralen through his most recent financial transactions – naturally, they lead straight to the gambling hotspot of Las Venus.

Meanwhile, Shral lures Jax to his office by giving her a fake F on an exam and asks her about the Sumi (sp?) Empire. Osborn has a mission for her. There’s a Sumi princess coming to speak on campus, and Jax needs to befriend her in order to recover some valuable information without alerting the Sumi Secret Police. Naturally, the princess, Aleka, is the white-haired beauty from Jax’s visions.

Las Venus is a cool concept; the seedy unregulated corner of the galaxy you always get in space-opera stuff, and seconds after arriving, Xander and Jett run into a strung-out Greg, who I genuinely thought we’d forgotten about completely since the cliffhanger reveal of his survival last season. He explains what happened on the Sea Hawk, and ensuing drug addiction. After he was freed from the Hypatia Syndicate, he made his way to Las Venus, since it’s easier to meddle with drugs there. The other Sea Hawk survivor, Lieutenant Collins, is also an addict, and has been fighting in the arena; Greg has been keeping him alive with his medical skills. He’s been plying those skills all over the planet, so he has a loyal coterie of rough-and-tumble fighters ready to back him up, and Xander’s authority means little on Las Venus. But even though he doesn’t much care about himself, he’s a bit more swayed by the news that Ralen is there.

Jett tagging along with Xander starts to make sense in “On a Night Like This”, since Greg is trying to synthesize a cure for his addiction, and his boffin expertise might be useful in that regard. But before that, there’s the politics of the pit-fighting to deal with. Collins is the current champion, but all the combatants are under contract – the collars they wear are explosive security measures to stop them from breaching them. Jax and Jett – the latter loving his life – pose as potential buyers for one of the fighters and express an interest in Ralen, but he isn’t up for sale until he fights in the arena and gets valued. He’s adamant he isn’t going anywhere, though.

Back on Earth, Jax and Zazie make a good impression on Princess Aleka, and we’re doing the whole “Jax is so beautiful that every sentient being in the galaxy is interested in her” thing. Fair enough. Appearances aren’t as useful for Ralen, though, who has his first match in the arena against Collins. He’s doing well until arrogance gets the best of him, and Xander rather childishly intervenes, voiding the match. Jett tries to kick up a fuss, but as it turns out, Ralen has already been bought by another Zatarian – his father, who tells Xander that his intentions are to watch his treacherous son die in the rematch. 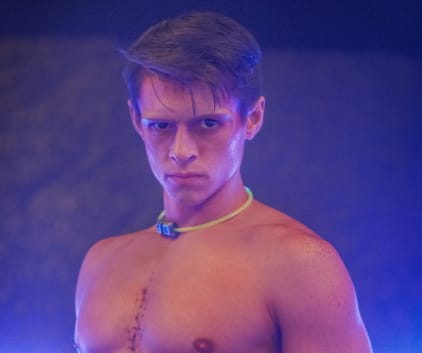 Pandora season 2, episode 5 gives Ralen an opportunity for a heart-to-heart with Greg, which is useful since they’re both on the run from something. The writing even approaches something resembling respectability here, as the two discuss Ralen’s ill-advised self-destructive impulses for exactly what they are – a particularly long and grandiose means of suicide. Is that really what Matta would want?

Anyway, “On a Night Like This” provides time for some backstory on Sumi society, which is dominated by men and features wife-on-wife violence as a standard. Aleka is unsubtly interested in Jax, which would make sense anyway but only makes more sense with the cultural context. Jax, though, is still hung up on Xander and indeed the mission, especially once the boys, all steaming in the bar to help synthesize Jett’s homebrew cure, video-call her. Look, sue me, but I laughed at this dopey scene, even if it’s a terrible way for Greg to get back in touch with her and Xander makes a complete idiot himself with his quasi-romantic “You make me smile” farewell.

Aleka is planning a grand gesture of turning her back — this is culturally very significant — to all the other wives, which is likely to either get her killed or inspire a revolution. There’s a whiff of romance to this whole affair, enough to convince Aleka to lean in for a smooch, but she and Jax are interrupted by the Sumi Secret Police, who take Jax captive. The plot thickens.

Speaking of which, back on Las Venus, the boys are able to spike Collins with Jett’s serum, which clears him up. Grateful for finally being able to see through his own eyes, he contritely apologizes to Ralen for all he’s done to him and his people. But the match has to go ahead regardless. And the only way for them not to get their heads blown off is for Collins to kill Ralen in the arena.

Back on Earth, Aleka turns to Zazie for help in freeing Jax, who is being interrogated with the help of a wonky-looking forcefield, and together they’re able to get her back to the relative safety of the dorms. Aleka shanks up everyone during the rescue, but when Jax wakes up, she’s gone, having left behind a Rubik’s Cube as a gift. Jax is both apologetic and thankful to Zazie, and the Cube – it’s a data cube, apparently – contains a video message from Aleka, who reveals that she’s getting information from someone on Earth, though she doesn’t know who and it’s Jax’s job to find out. But, plot twist, Zazie is working for Tierney and Eve, which Aleka also warns Jax about.

Ralen and Collins square off for their match on Las Venus, with Ralen inexplicably quoting Latin in the build-up. They fight, and while it starts out competitive, Collins eventually gets the upper hand and “kills” Ralen in full view of his father. This is the cliffhanger ending of “On a Night Like This”, and it’s played up for maximum emotion, but are we really expected to believe that a major character has been killed off in this way? I’m skeptical, as I imagine everyone is, but we’ll get confirmation (or not) next week.