This recap of The Walking Dead: World Beyond season 1, episode 6, “Shadow Puppets”, contains spoilers. You can check out our thoughts on the previous episode by clicking these words.

The opening narration of “Shadow Puppets” is supplemented with… well, shadow puppets, which really doesn’t help the rather tired description of society’s downfall to land with any more impact. I respect the fact that World Beyond is really trying to make a point of bedding in this theme of the youth’s lives beginning after the end of the world, but it really isn’t taking at the moment.

Anyway, we resume right where we left off, with Iris, Hope, Silas, and Elton being held at branch-point by a youthful newcomer whom Felix quickly gets the drop on. Crisis averted! He claims to be alone and to have been taking a leak in the bushes. He has no stuff. His name is Percy (Ted Sutherland). Iris invites him to eat with them.

In a near-inaudible mumble, Percy lays out his brief backstory, including getting his stuff nabbed by a group who seemed nice enough. He’s going back to the abandoned town down the road to get back what’s his, which Felix cautions against. Percy, though, claims it isn’t a vigilante thing, or about the principle of it all — some things just can’t be replaced.

The girls take to Percy and his morose storytelling style. It’s probably nice for them to meet someone of a similar age who hasn’t had such a sheltered upbringing. But Hope catches him in a relatively obvious lie, and she deciphers that it’s Percy’s car that has been stolen, not his pack. He lied because “it’s like telling you there’s buried treasure and expecting you not to go digging for it.” His truck is, apparently, loaded with refined fuel, which Iris decides will be a great way to get them where they’re going. She offers to help him retrieve the truck in exchange for a lift. Felix, for crying out loud, stop letting the kids make decisions. This is so obviously idiotic that I barely even know what to say, but Iris is clearly in charge, and apparently, we’re not worried about Huck being on a scouting mission, so here we are.

After spray-painting a message for Huck saying they’ll be back soon, the Scooby gang sets out. On the way, Hope and Elton discuss his dead mum and Elton John and Elton’s on-going literary work, which he hopes to pass on when it’s finished. Hope volunteers her help for that last bit since it apparently only comprises “taking pictures of worms and stuff.” Iris and Percy discuss the relative comfort of the Campus settlement and their likelihood of success, and Silas makes it clear to Felix that he doesn’t particularly like Percy, which seems like a wise conclusion thus far.

When they get where they’re going, the gang spot the truck instantly, and Percy proposes a smash and grab, claiming he can hotwire the vehicle in under a minute. Felix obviously goes along with a kid’s plan as usual, but inside the truck, they find the executed corpse of some bloke named Tony (Scott Adsit). With no ignition wires, Percy needs the keys, so he pilfers a knife and goes on his way. Iris is determined to help him, so Felix agrees to do that in her stead, leaving her and Silas looking after the gear and taking Elton and Hope with him, for no real reason that I can decipher. 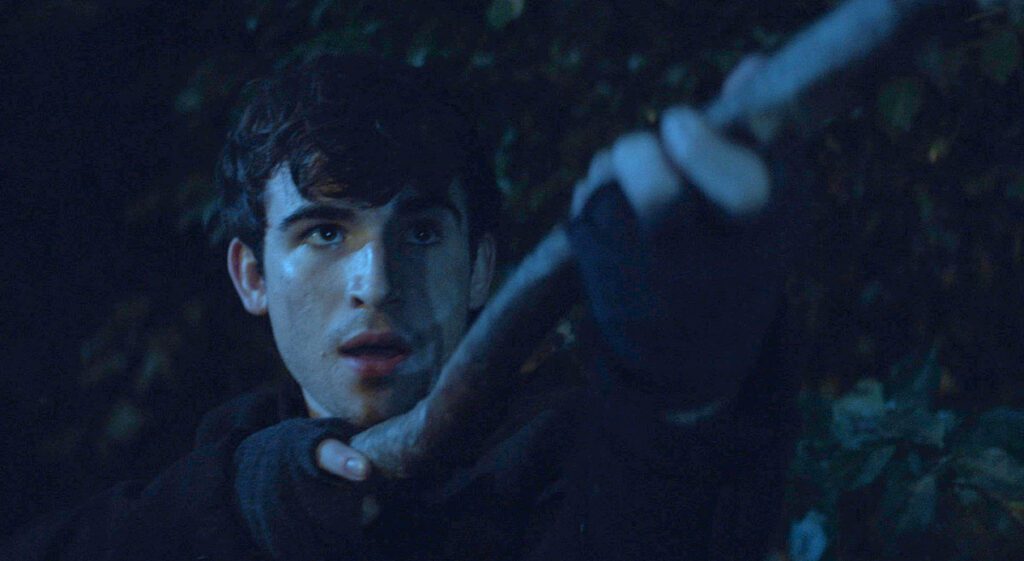 Iris, apparently contractually mandated to behave like a moron, fulfills that obligation in The Walking Dead: World Beyond season 1, episode 6 by refusing to just wait around and instead sets out to help, to no argument whatsoever from Silas. She eventually hooks back up with Percy in an abandoned clothing store and offers to help him search upstairs. Hope and Elton, meanwhile, continue to discuss Elton’s family history while on watch outside. Riveting stuff! Felix is exploring inside on his own, and I’ll concede that getting fooled by the zombie in a mirror is a nice visual trick, but shoving the barrel of his pistol a couple of inches through its chin is a pretty useless endeavor. Aren’t you supposed to destroy the brain? Details!

Upstairs, Percy and Iris find the keys. He gives them to her and tells her to find Felix while he retrieves his stuff from another room, but he evidently gets caught in the act and a gunshot goes off. Iris has a personal crisis on the stairs trying to decide whether to help out this guy she’s just met and can’t trust and of course, she decides to help him. What she discovers, though, is that his “stuff” is full of paper. While Silas is distracted, Tony, having presumably been faking, gets up, nabs everyone’s stuff, and drives away in the truck. It’s a robbery!

Iris, in true idiot fashion, gets stuck in a giant bin, and she claims the walls are too high even though they’re clearly not. Nevertheless, she’s set about by the walkers inside, failing to cope with such overwhelming numbers (there are two.) But Percy returns to save the day, loading everyone onto the truck. To clarify: A not particularly smart character was so much smarter than the heroes that he took pity on them and saved them. Even by the show’s usual standards, The Walking Dead: World Beyond episode 6 is breathtakingly dumb.

Percy is obviously running a grift with his uncle Tony. The two of them call the zombies “has-beens”, which is almost as stupid as “empties”. After a brief argument, everyone becomes firm friends, and Tony starts doing magic tricks for Elton’s entertainment. He’s a former Vegas magician, and he and Tony get what they need without hurting people by scamming them. Iris is a bit offended by this since she really thought she had good instincts, which is just hilarious. Percy claims they came back because she does have good instincts since she went back to save him rather than fleeing with the keys. Percy claims to have run this grift several times over, which doesn’t exactly seem likely given how badly it went just this once. We’re obviously not supposed to ask too many questions about this.

Tony is familiar with the Civic Republic, it seems, and he’s wondering if Felix’s patch will get them out of a bind if they end up in one. I guess we’ll see. Either way, they agree to the arrangement of a lift. That night, Tony and Percy deliver a shadow puppet show, the routine they peddle to various little settlements in order to get by. This is treated as a touching moment, a snapshot of humanity as it once was, complete with teary-eyed reaction shots from the Scooby gang. But it’s so heavy-handed that it’s basically impossible to take seriously, much less be moved by. Maybe next week.

In a post-credit stinger, we see Dr. Lyla Bellshaw (Natalie Gold) opening up a file of Leopold’s work, which contains a note from Iris and Hope and a picture of them which looks nothing like either. She gets a call, and insists that Dr. Bennett won’t be a problem; he and his security team will be dealt with by the time “they” arrive. It looks like the Scooby gang is expected, and their rescue mission isn’t going to be as heroic as they think. Whoever could have seen that coming.

Thanks for reading our recap of The Walking Dead: World Beyond season 1, episode 6, “Shadow Puppets”. For more recaps, reviews, and original features covering the world of entertainment, why not follow us on Twitter and like our Facebook page?