“Honey” has some interesting dynamics to play with, but uneven writing makes it one of the season’s weaker offerings.

“Honey” has some interesting dynamics to play with, but uneven writing makes it one of the season’s weaker offerings.

This recap of Fear the Walking Dead season 6, episode 5, “Honey”, contains spoilers. You can check out our thoughts on the previous episode by clicking these words.

It had to happen eventually. After a run of excellent, quasi-anthological episodes, Fear the Walking Dead‘s latest season runs into a bit of a hiccup with “Honey”, a more serialized installment that brings a few characters together and gets them frustratingly stuck in reams of knotty flip-flopping dialogue. There’s still plenty of groundwork laid here for interesting things to come, though.

We once again return to Dwight, who has been happily reunited with Sherry and is at the end of his treatment for the bubonic plague, so things are looking up — though not for long, obviously. The honeymoon phase — this is set a week after their rather random reunion — is over, and their misty reminiscences are interrupted by a group of masked men who ambush Dwight after an effectively tense little moment.

As it turns out, this group is the one Sherry belongs to, which she explains when she arrives with a mask of her own at what looks like a skate park they’re using as a staging ground. Its members are Virginia’s outcasts, those deemed unfit or unworthy of living in her settlements, or those who’re on the run from her. Naturally, then, they’re trying to take her down, and are also holding Al as an incentive for Dwight to open up about where Ginny will be next. They assume, understandably, that since Dwight and Al work for Ginny they’re privy to her personal itinerary, and Dwight’s insistence that they only do the scouting job because they have to falls on deaf ears until he’s vouched for by a character he clearly knows but whom I don’t recall. Oops.

Anyway, the scheme this mob has cooked up is destroying the MRAP using explosives, which Al insists is a daft idea since MRAP is an acronym for Mine-Resistant Ambush Protected — the thing’s literally designed to be immune to that kind of attack. She proposes they steal it instead, which is a much better idea and allows “Honey” to indulge in this season’s obvious fondness for the Western genre in a horseback robbery sequence that works pretty well.

It doesn’t work all that well for Dwight, admittedly, since in a scuffle with the driver his mask comes off, exposing his very distinctive face, and the driver subsequently escapes. Luckily, Morgan arrives right on time with the fella hog-tied. What a touching reunion in Fear the Walking Dead season 6, episode 5. 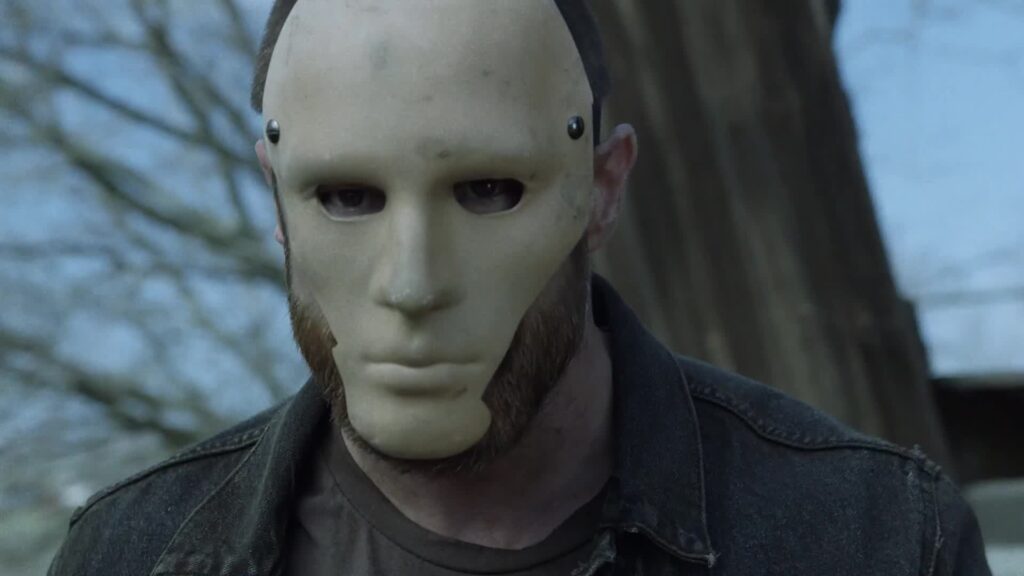 The civility doesn’t last long, though. Morgan goes back to the skate park with the gang, and around a fire, they discuss his in-progress utopia and recruitment drive, as well as the outcasts’ plan to take out Virginia. Morgan isn’t happy about this plan, though not for the usual moralistic “all life is sacred” reasons — he just thinks it’s too early and the plan is very likely to fail, thus endangering all his other friends he hasn’t had time to rescue yet. It’s a fair point, but nobody among the outcasts is buying it, least of all Sherry. And if Sherry isn’t on-side, neither is Dwight, which is where the writing takes something of a nosedive.

See, at first, Dwight tries to talk Sherry around, but she’s insistent about the plan and so he agrees to go along with it. Part of that plan involves interrogating the MRAP’s driver with assistance from a bucketful of walker guts and a hungry dog the gang keeps around as a kind of mascot, but Morgan intervenes in this because he doesn’t like where it’s heading. This doesn’t exactly mesh well with his sudden tough-guy rebirth from the premiere and elsewhere, but when he subsequently argues with Dwight about it, he tries to play it off as a matter of pragmatism once again. This time, having come around to Sherry’s perspective, Dwight is adamant that nothing can be different until Ginny is gone, even invoking Grace in a classic what-if argument that leaves Morgan a bit stumped.

Sherry, though, was also concerned about the interrogation and whether Dwight was really about to sic a dog on a dude, so she suggests a slightly more pacifistic plan, which is to lure Ginny there by having Dwight check-in and announce he has discovered a settlement that requires her personal examination. Fair enough. But when he suggests sidelining Morgan and Al so they don’t interfere with this, Sherry is weirdly concerned about him turning on his friends, who he tellingly referred to as “family” a bit earlier. She just can’t seem to make her mind up.

The decision is kind of made for them when Dwight catches Morgan and Al stashing bundles of TNT, which apparently will take out the MRAP — Al says she was lying about its immunity to explosives, but the acronym still means the same thing, so surely it’s armored against explosives a little bit? No matter. Dwight and the rest of the crew hold Morgan and Al at gunpoint and lock them in the pool where they interrogated the driver, but then Sherry turns on Dwight and locks him in there, insisting she won’t let him become the person he used to be. This is all very confusing.

To make matters worse, while Dwight is being held captive, he confesses to Morgan and Al that now wasn’t the right time to take out Ginny after all, despite being very secure in his convictions just moments before. He’s able to free himself (very easily, I might add) just in time to intervene in the ambush that the gang has prepared for Ginny, even though she didn’t arrive with the rest of her advance party. This scene is, admittedly, pretty effective, but the fact you can’t quite tell what’s going to happen is more a consequence of shoddy writing than anything else. Either way, a tearful Sherry doesn’t open fire on Ginny’s people but then flips out on Dwight once they’ve ridden away, blaming him for her inability to do so.

When Dwight and Sherry speak after this, it becomes clear that she’s still somewhat hung up on Negan and everything that happened at the Sanctuary, which makes sense but not in this show since it has pretty deliberately divorced itself from everything that happened in the main arc of the flagship series. It’s really jarring to see this direct of a reference, especially since the main show is now set several years after this one. Anyway, Dwight and Sherry can’t come to terms and they part ways again, with him symbolically freeing the outcasts’ dog as a kind of spiteful parting gesture, which I can respect.

Now alone once again, Dwight teams up with Al and Morgan, and they dress up a couple of walkers to look like them, laying the groundwork for Ginny to assume they’ve been killed. They then return to the group of plague victims they saved from the office building, who have apparently just been chilling in a truck all this time — remember, “Honey” is set a whole week after they were rescued. These will be the first citizens of Morgan’s secret utopia. And luckily, they’re willing to get to work building it. Let’s just hope that this kind of writing doesn’t topple the whole thing before they get going.

Thanks for reading our recap of Fear the Walking Dead season 6, episode 5, “Honey”. For more recaps, reviews, and original features covering the world of entertainment, why not follow us on Twitter and like our Facebook page?