“Pay In Blood” riffs on The Magnificent Seven as the lads find themselves stranded on a mining colony under duress from pilots, which a broader conspiracy continues to deepen elsewhere.

“Pay In Blood” riffs on The Magnificent Seven as the lads find themselves stranded on a mining colony under duress from pilots, which a broader conspiracy continues to deepen elsewhere.

This recap of Pandora season 2, episode 6, “Pay In Blood”, contains spoilers. You can check out our thoughts on the previous episode by clicking these words.

Apparently, we’re still pretending that Ralen is dead in “Pay In Blood”, at least for a few moments. Xander and Greg are returning to Earth after their stint on Las Venus, while Jett is tearfully mourning his one-time friend — who suddenly opens his eyes. He reveals that a biological quirk of the Zatarians is the ability to slow down their breathing and heart rate to simulate death, which is a nice idea but surely someone would have known about this — such as, let’s say, Ralen’s Zatarian father — and sussed out the scheme back on Las Venus. But whatever.

There are more pressing matters to attend to, anyway, since the ship is attacked by Sumi pirate vessels and is forced to precariously dodge torpedos (Pandora is still very modestly budgeted, but sequences like this don’t look anywhere near as terrible as they could, all things considered.) Despite the midair finessing, the ship is nonetheless forced to crash-land on Aluna-4, an outer rim mining colony.

Meanwhile, back on Earth, Jax is continuing to bond with Zazie, who as we now know is a spy. Shral still has Jax working on her very important “family tree” assignment, involving her uncle, which she ought to be getting on with, much to the subtle interest of Zazie.

But back to the boys’ club. The Aluna-4 colony is built to resemble an Old West town. It kicks off immediately, and the lads take shelter in a building that happens to contain a woman with a shotgun — see, we’re even doing old-timey Earth weapons! Xander is able to disarm her, and father, Gorch (Emmanuel Todorov), arrives to dispense some backstory. His daughter’s name is Rachel (Devora Wilde). The colony has been largely abandoned by Earth and is under a degree of stress from the Sumi raiders. Xander proposes a trade.

As Shral explains to Jax, her work last week has allowed Osborn to monitor Sumi communications, and it seems that Aleka’s claims that the government is tacitly supporting the pirates attacking Earth’s outer colonies has a lot of validity. Shral tasks Jax with interrogating her own mother for some more valuable intel, and you can see the two plot threads beginning to come together here in “Pay In Blood”.

Back on Aluna-4, Sumi marauders enter the atmosphere to shake the colony down for thulium and inquire about possible survivors from the Earth-Com ships. Xander has proposed a plan which obviously involves Jett impersonating Xander, with he and Ralen masquerading as prisoners. They ambush the marauders and take them out, which will inevitably provoke the Sumi, but luckily the whole colony is on-hand to fight back. We’re doing The Magnificent Seven, basically.

Back on Earth, Jax persuades Eve to contact Tierney, although it’s hardly a friendly conversation. Eve resents the fact that Jax wants to be “normal” when she could be “extraordinary”, which apparently she’ll understand when she has a child of her own. If I could get my kids to stop talking for a minute I’d be happy with that, so this might be a bit ambitious. Still, at least they’re chatting. 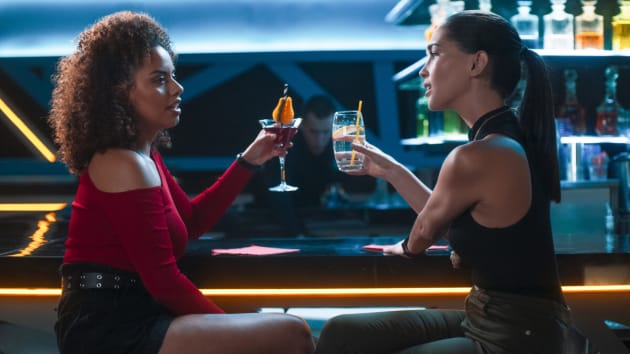 While Xander outlines a plan to fight the Sumi, meanwhile, Ralen figures out that the Sumi are being armed by Parallax Galactic. Another mystery! But it’s time to get the ball rolling in Pandora season 2, episode 6, so Ralen goes off to plant explosives in the mine while Gorch arms the townsfolk and Greg sets up a triage unit. While the latter is doing that, he can’t help but pretend not to be in love with Jax anymore, even though he brings her up at any given opportunity. Nevertheless, he’s had something of a personal awakening as a result of not getting the girl. I’ll believe it when I see it, Greg.

Meanwhile, Ralen and Gorch head into the mines, and Ralen confronts him over not being who he claims to be, which prompts Gorch to pull his gun on him. Developments! They fight, and when Ralen gets the better of him Gorch reveals his name is that of an Earth-Com soldier whose papers he swiped — he and his wife were smugglers and criminals, and Rachel doesn’t know. This leads Ralen to open up a little about the loss of Matta, and he considers this to be his second chance — Gorch and Rachel, he thinks, deserve the same. He’ll keep Gorch’s secret and fight for him.

Thanks to Osborn intercepting communications, Shral is aware of Xander’s ship having gone down on Aluna-4, and tells Jax about this. She insists they have to find a way to save them, which is a suggestion he’s happy about, though his plan for doing so remains mysterious for now. He later meets with Tierney, whose plan is, apparently, to destroy the Ancients before they can destroy everyone else.

“Pay In Blood” sees things all kick off on Aluna-4, with Xander, Gorch, and the townsfolk fighting off the first wave of Sumi marauders, quickly becoming overwhelmed and ordering a retreat back to the mines. Ralen lures the Sumi inside and they set off a tripwire, detonating the whole place. As another Sumi ship enters the atmosphere, Jett blows it out of the sky.

When the fight spills into the triage centre, Gorch takes a bullet saving Rachel and dies on the floor. The Sumi cease their attack, and Aleka herself arrives to tell Xander that Jax has called in a favour. He’s free to go home and the colony will be safe under the authority of the Sumi royal family, whom the pirates seemingly defer to, which leads Xander to the obvious question of why not just call off their attacks in general. He doesn’t get a good answer, but Aleka at least insists that she’ll do anything Jax asks of her after showing her back to her — this makes them sisters, apparently, so that’s useful.

In the aftermath of the battle, Rachel elects to stay behind despite the death of her father and help to rebuild — Greg, too, decides to remain, believing he can do some good there. Ralen also reaches a personal epiphany, realizing that he can make a difference. Even Xander is coming to terms with the fact that, as a captain, he’s able to make the tough choices he suspected he might not be able to. Ralen says he’ll follow him anywhere, which is just as well since they have somewhere to be — they have to prove that Parallax is working with the Sumi Empire.

“Pay In Blood” ends in typical cliffhanger fashion with Eve instructing Tierney to free her from her prison. Apparently, they have work to do.

Thanks for reading our recap of Pandora season 2, episode 6, “Pay In Blood”. For more recaps, reviews, and original features covering the world of entertainment, why not follow us on Twitter and like our Facebook page?