Fear the Walking Dead season 6, episode 6 recap – “Bury Her Next to Jasper’s Leg”

An accident at an oilfield pits June and Ginny against each other in “Bury Her Next to Jasper’s Leg”, while a dangerous rebellion seems to be threatening the settlements.

An accident at an oilfield pits June and Ginny against each other in “Bury Her Next to Jasper’s Leg”, while a dangerous rebellion seems to be threatening the settlements.


This recap of Fear the Walking Dead season 6, episode 6, “Bury Her Next to Jasper’s Leg”, contains spoilers. You can check out our thoughts on the previous episode by clicking these words.

The title of this week’s episode of Fear the Walking Dead is a line from Virginia in the cold open, and it’s to be taken literally. After running down a woman named Paige (Ellen Locy) who has been leaving those “The End is the Beginning” tags lying around, Ginny and her cronies corner her in a remote patch of forest where we learn Jasper’s leg was buried when he lost it. When Paige refuses to be taken in and shoots herself under the chin, Ginny instructs she be buried next to it, after a thorough search of her belly and bunkhouse to determine what she has been up to. There’s trouble in paradise, it seems.

But “Bury Her Next to Jasper’s Leg” is a long-overdue June-centric episode. She’s working as a field medic with Sarah, performing emergency appendectomies while walkers hammer the doors of their truck-based trauma center. Her patient, a man named Malcolm (Dalex Miller), dies on the table and resurrects, much hungrier, halfway through CPR. This whole sequence is Fear at its newfound best, with sharp writing, bleak humour, and tension stemming from understandable character decisions rather than blind stupidity as in some other shows I could mention.

June is lamenting always being too late on the scene, and the fact that Ginny won’t build her a hospital. She’s taking Malcolm’s death hard, and one assumes many more besides that one. As she explains to John, she started going on the medical runs believing she could help people. John suggests she leaves, but he’s suggesting that more for himself — after what he went through in his episode, he has realized he isn’t going to last long if he stays. Their conversation is interrupted by frantic radio calls summoning them both to Tank Town, where some kind of accident has occurred.

When they get there, it’s chaos. The operation to drill a new oil well has had calamitous results, leaving open flames near tanks and many people badly injured or stuck inside or both. Luciana is there, covered in soot, doing her best to remind us of when she was a main character. Out of nowhere, Ginny herself arrives and insists she’s going inside, though one assumes for less altruistic purposes. Luciana drives Ginny and Sarah to the oilfield, where it’s raining crude from a spurting torrent and “The End is the Beginning” has been tellingly daubed on one of the tanks. That suggests to Ginny it was an act of deliberate sabotage rather than an accident, but June reminds her that she isn’t going to learn anything unless they get the injured out of there, thus setting up the core conflict in Fear the Walking Dead season 6, episode 6. 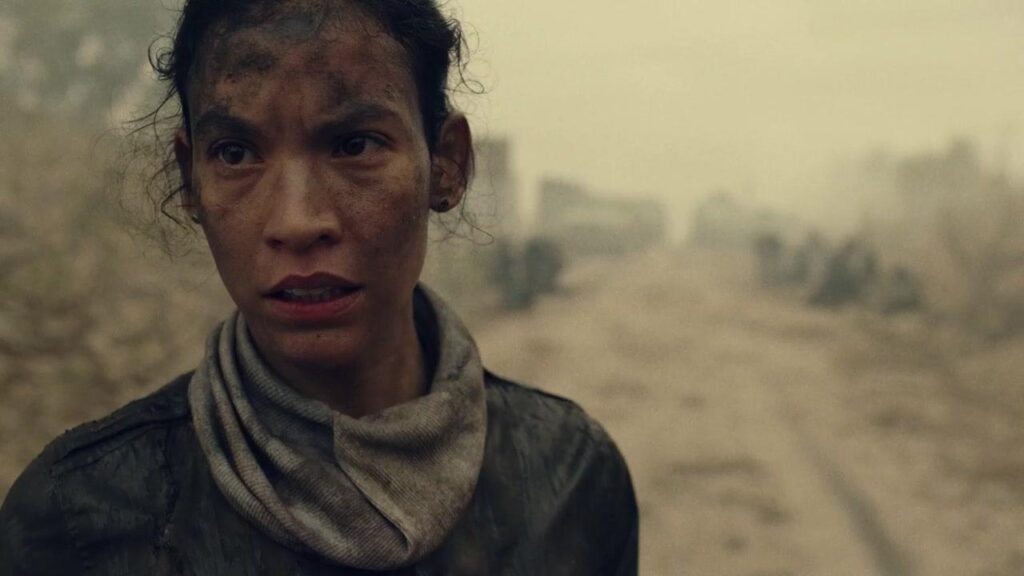 The burning oilfield is a striking setting for “Bury Her Next to Jasper’s Leg”, and the premise is steeped in genuinely compelling mystery and an interesting philosophical clash. The matter of who caused the accident is only one detail. While June is ministering to an injured Wes, she’s attacked by a walker with sharp pieces of shrapnel taped to its fingers — who’s responsible for that? And why? Perhaps more to the point, is Ginny’s determination to uncover the deeper plot more vital to the safety of “the people in her auspices” than June’s worry about simply saving these people at this moment? These aren’t questions with easy answers, especially not since Wes apparently had a bunk full of spray paint.

This is the most obviously unhinged we’ve seen Ginny. She tortures Wes for information until June defies orders by sedating him, and they continue to argue after the fact, even while Wes has to be loaded into the truck and driven away as walkers begin to overwhelm the site and another explosion sends the torrent of oil up in a giant plume of fire. June and Ginny are trapped inside one of the structures, and in her concussed state, Ginny is bitten on the hand.

It’s obvious what needs to happen here — the hand has to come off. Ginny is okay to lop it off with a little ax she finds in the shed, but June takes it from her and refuses to perform the amputation, saying these people died because of Ginny. They fight, with June getting the upper hand, and she throws Ginny’s own line back at her: “Some dogs you have to know when to put out to pasture.” As June coaches Sarah through saving Wes over the radio, Ginny argues for her own life, attempting to justify her actions while June holds the ax to her throat. Ginny eventually starts talking about Dakota, and how everything she did was to keep her safe, which is enough for June to lop off the offending appendage with a pointed, “Don’t make me regret this.”

In the aftermath of June saving Ginny’s life, Luciana, Sarah, and Wes are all wondering aloud why she’d bother. June explains that she bargained for the hospital. They’ll run it, and protect it, and decide how it operates, and they’ll have help — from Wendell. Now June has a purpose, she wants to stay; she’s tired of running, which she explains to John. With the thus-far anonymous group coming after the settlements, his help will be needed too, but he’s reluctant to give it. It seems his devotion to June is enough to override his concerns, but it turns out not to be. As he dutifully follows the medical truck back, they reach a fork in the road, and Furious 7 style he takes his own path, wiping his tears as he leaves June behind.

Thanks for reading our recap of Fear the Walking Dead season 6, episode 6, “Bury Her Next to Jasper’s Leg”. For more recaps, reviews, and original features covering the world of entertainment, why not follow us on Twitter and like our Facebook page?