“See No Evil” shifts the focus of The Undoing again, this time to Grace and Jonathan’s relationship, and we’re left to ponder how far either of them might go to preserve what they feel is theirs.

“See No Evil” shifts the focus of The Undoing again, this time to Grace and Jonathan’s relationship, and we’re left to ponder how far either of them might go to preserve what they feel is theirs.


This recap of The Undoing season 1, episode 4, “See No Evil”, contains spoilers. You can check out our thoughts on the previous episode by clicking these words.

It seems that with every episode, The Undoing shifts its focus. Initially, it was about, broadly, who killed Elena Alves. Then, it became about whether Jonathan Fraser killed her, and the reasons he might have done so. Here in “See No Evil”, the focus shifts a third time, becoming in large part about whether Grace will take her husband back irrespective of whether he killed his mistress or not. Much of the episode is dedicated to showcasing Jonathan, now out on bail, as a dedicated if not entirely masterful manipulator; a seasoned charmer used to getting what he wants in large part by convincing people he’s somebody other than he actually is.

The glimmers we get in this episode of Grace’s devotion to her husband even amidst her claims to have separated from him indefinitely have the knock-on effect of further implicating Grace herself, since the impression is that she’ll buy whatever Jonathan’s selling, and if she can get it at a discount then fair enough. If she’s going to hold onto her husband anyway, and deep down she knows it, is it really outside the realm of possibility that she’d, say, neglect to mention receiving many calls from Elena’s phone or being very close to her apartment on the night of her death, or maybe pose for an oil painting? We’re to believe, I think, that Elena was a dangerous stalker, consumed by jealousy and rage. But have we seen anything that really confirms that? Haven’t we seen more evidence that Grace has much more to tell than she’s letting on? 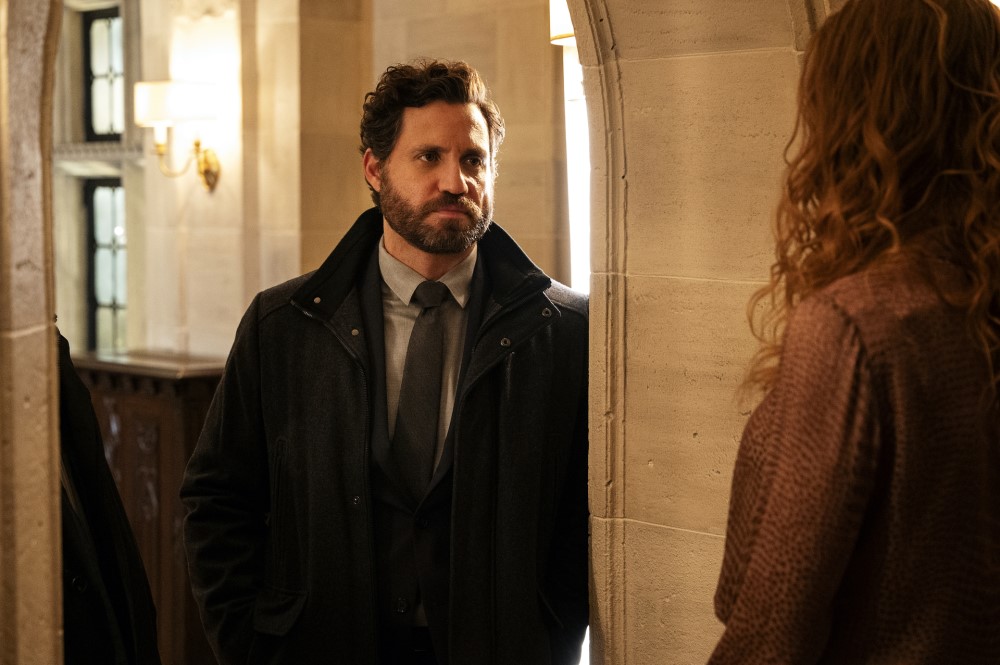 If we imagine, for a moment, that this is how Grace feels, then it’s not too much of a leap to imagine how her father, Franklin, feels. Franklin, as a long-time adulterer himself, has never liked Jonathan and has never been able to truly protect Grace. For once, he’s in a position to do that now, by throwing money at Jonathan’s bail and at the no-nonsense Haley Fitzgerald, and by telling Reardon’s Principal Connaver that he’s an “old-fashioned c********r”, which is the kind of threat you can only make if you’re a) remarkably wealthy and influential and b) Donald Sutherland. It’s a fine, meaty part, and it looks like it’ll offer more and more once Franklin insists to Jonathan that he might very well kill him if the mood strikes. But it raises all kinds of questions about what Franklin really feels the need to protect his daughter from. Is it her husband, or herself?

By design, “See No Evil” makes it hard to get a sense of what Jonathan’s up to. He veers from pathetic begging when he’s around Grace and Henry and Franklin to very thinly-disguised intimidation when he drops in unexpectedly on Fernando and Miguel. Hugh Grant is brilliant here, but not by virtue of doing anything else with his toff persona than he usually does. It’s the context that has changed. Here, his suggestion of taking his daughter off Fernando’s hands isn’t a nice-guy gesture, but a threat, a reminder that he’s the kind of man who gets what he wants while Fernando is the kind of man who has to fight tooth and nail just for what he needs.

The Undoing makes no secret whatsoever of its contempt for the rich. You can feel it in scenes like this, and characters like Haley make it explicit. Jonathan’s blasé attitude towards his predicament is difficult for her and indeed the audience to read. Is he simply so used to being protected by money and his high-society reputation that he doesn’t believe simple matters like the justice system can trouble him? Or is he a sociopath? We’re not surprised to learn that he has been unfaithful to Grace before, and you have to wonder whether she knew – whether, as we discussed earlier, her willingness to take him back in the past is a sure-fire indicator that she’d be willing to take him back now. Maybe even that she’d be willing to go to great lengths in order to keep him.

For what it’s worth, I think Jonathan’s other mistress might be Sylvia, but I guess we’ll see.

Thanks for reading our recap of The Undoing season 1, episode 4, “See No Evil”. For more recaps, reviews, and original features covering the world of entertainment, why not follow us on Twitter and like our Facebook page?