Big Sky seems like any old rote network drama, right up until it doesn’t, and that last-minute twist makes it must-see television for at least one more week, despite its obvious flaws.

Big Sky seems like any old rote network drama, right up until it doesn’t, and that last-minute twist makes it must-see television for at least one more week, despite its obvious flaws.

As someone who covers TV for a living, it’s very rare that I’m genuinely surprised by anything, much less a network drama. And yet, here we are with ABC’s Big Sky, the pilot of which was perfectly watchable in the usual way right up until a last-minute out-of-nowhere twist ending, with which it became must-see television for at least, like, another week. And part of the reason why that twist worked so well was that it upended the expectations that the pilot had spent its entire runtime reinforcing.

Things start out predictably enough. Cody Hoyt (Ryan Philippe, not far removed from doing a decent job as Bob Lee Swagger on USA’s Shooter) is a P.I. alongside his romantic and professional partner Cassie Dewell (Kylie Bunbury), though their relationship is complicated somewhat by the presence of Cody’s estranged ex-cop wife Jenny (Katheryn Winnick). So, we have a standard procedural framework and a love triangle, and at one point the women literally fight over this very handsome but rather bland dude. It’s dull. 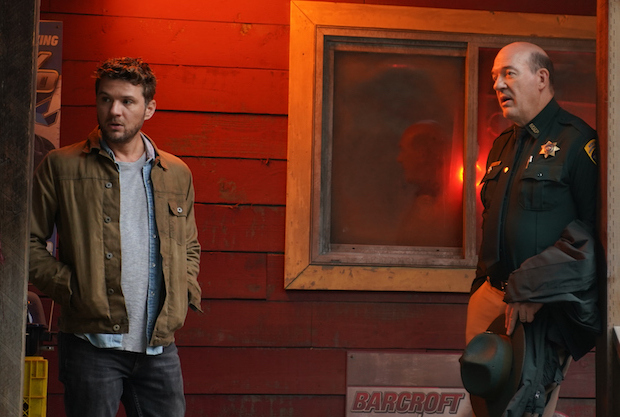 The catch is that it’s supposed to be dull. It’s supposed to be predictable. It’s all necessary for the twist to really work. Despite the show’s marketing having slightly given away the fact that something unexpected was going to happen at the end of the pilot, it also heavily pushed the idea of Philippe in the lead role. Then Big Sky kills him off, totally without ceremony, leaving the rivalrous Cassie and Jenny to be the P.I.’s in his place. Suddenly, the whole thing is much more interesting.

Cody is killed by Montana State Trooper Rick Legarski (John Carroll Lynch) while on the hunt for missing sisters Danielle (Natalie Alyn Lynd) and Grace Sullivan (Jade Pettyjohn), who have been kidnapped by a long-haul trucker and serial killer named, hilariously, Ronald (Brian Geraghty). It legitimately does come out of nowhere, although Big Sky episode 1 goes to significant effort to characterize Legarski as exceptionally weird in his home life, and Ronald doesn’t get off easy either (his mother is disappointed in him – if only she knew.) This is all based on the 2013 C.J. Box novel The Highway, but modernized to be set in the current pandemic, for seemingly no reason at all. Luckily it seems to exist in some kind of pocket dimension anyway, except for the well-observed detail that most of Ronald’s victims haven’t been paid the slightest bit of attention to because they’ve all been sex workers he picked up from truck stops.

Either way, though, there’s no way that twist won’t get people talking – when was the last time a show’s ostensible lead got gunned down at the end of the pilot? And that implies to me that Big Sky is probably cleverer than a lot of it seems, although perhaps that’s just wishful thinking. A genuinely intriguing new drama grafted onto the skeleton of a rote procedural is an interesting proposition for the season, especially since ABC doesn’t have anything else in the pipeline to compete with it. There’s a lot of promise here. Let’s all hope that subsequent episodes make good on it.

Thanks for reading our recap of Big Sky season 1, episode 1, “Pilot”. For more recaps, reviews, and original features covering the world of entertainment, why not follow us on Twitter and like our Facebook page?