“Paris Is for Lovers, Not Mothers” sees Bob and Abishola opening up a little more now that their marriage is on the horizon, as love continues to trouble other characters too.

“Paris Is for Lovers, Not Mothers” sees Bob and Abishola opening up a little more now that their marriage is on the horizon, as love continues to trouble other characters too.


This recap of Bob Hearts Abishola season 2, episode 2, “Paris Is for Lovers, Not Mothers”, contains spoilers. You can check out our thoughts on the previous episode by clicking these words.

After the good news in the premiere, Bob wants to take Abishola out to celebrate their engagement, despite her not wearing the ring at work. It’s necessary, he thinks, to stop men sniffing around, to let them know Abishola is spoken for. Bob doesn’t have a similar defence mechanism of his own, but then again, with that moustache, he doesn’t need one.

This is a good opportunity for Bob and Abishola to open up to each other a little more now that their engagement is official. Abishola is happy just to spend time with him and isn’t fussed about where they go — imagine that! — so Bob takes her to a burger stand that holds some personal significance for him. It might not have done his heart or arteries any good, but that place was there for him when he needed it; Abishola reveals that she could have perhaps used a place like this herself when her husband returned to Nigeria because he couldn’t find a job in the United States. She was willing to sacrifice to give her son a better life, and he wasn’t. 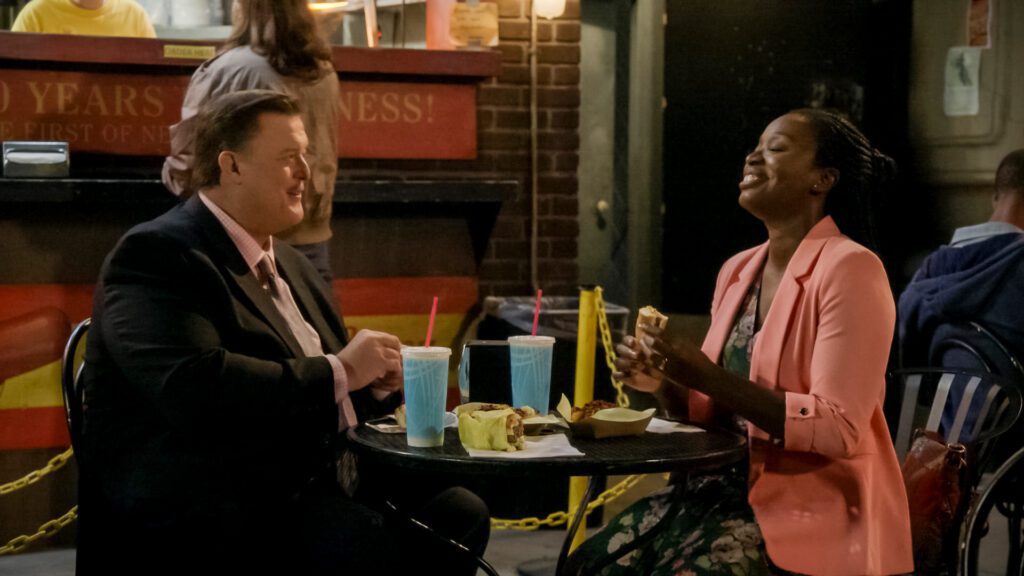 In the B-plot of Bob Hearts Abishola season 2, episode 2, Kemi and Chukwuemeka have a bit of a falling out when he reveals he’s taking his mother, rather than her, to Paris. This is where the episode’s title comes from, as Kemi declares that “Paris is for lovers, not mothers.” She later rants to Abishola and to Olu and Tunde about wanting Chukwuemeka’s mother dead. This thread is played entirely for laughs rather than any deeper insight.

Better are a couple of minor storylines occurring elsewhere. With Bob out on his date, Douglas is left in charge of Dottie, and when he tries to finesse a promotion out of her, she tells him he has to earn it. She wants him to work on the warehouse floor for a year, or two, so that he can understand how privileged he has been.

Speaking of the warehouse, Kofo still believes that there is Hope between him and Christina. Goodwin believes Christina has bewitched him and they need to defeat her magic using a YouTube tutorial — naturally, this doesn’t work. Most of this will pay off in the next episode.

Thanks for reading our recap of Bob Hearts Abishola season 2, episode 2, “Paris Is for Lovers, Not Mothers”. For more recaps, reviews, and original features covering the world of entertainment, why not follow us on Twitter and like our Facebook page?