Paul Bettany anchors a well-intentioned drama that unfortunately veers more towards cliché and sentimentality as it goes along.

Paul Bettany anchors a well-intentioned drama that unfortunately veers more towards cliché and sentimentality as it goes along.


Uncle Frank, now streaming on Amazon Prime, merges writer-director Alan Ball’s favourite themes with a hodgepodge of well-worn genre templates, from the coming-of-age drama to the cross-country road trip to the fraught family melodrama. It’s better at being some of these things than others, but it remains a well-intentioned exploration of the conservative American South’s complicated relationship with bigotry, even if it eventually succumbs to various clichés, contrivances, and heavy-handed sentimentality.

In its earlier, better portions, Uncle Frank is, despite its namesake, centred in the wide-eyed, naïve perspective of Beth Bledsoe (Sophia Lillis doing fine work). She hails from a staunch traditionalist and, let’s face it, archetypal family in Creekville, South Carolina, but remains fascinated with her ostracised Uncle Frank (Paul Bettany), a professor at NYU where she eventually becomes a freshman. While there she drops in at Frank’s Greenwich Village flat unexpectedly and discovers quite by chance that he’s gay, shacked up with his Saudi Arabian immigrant boyfriend Wally (Peter Macdissi). Through Frank, Beth begins to realize there is a much wider world than the one she is accustomed to.

This is Uncle Frank as a coming-of-age drama, and also at its best. Beth’s excitement, open-minded curiosity and innate empathy make her a compelling lens through which to meet and learn more about Frank, who is infinitely more intelligent and charming than the family who has always treated him like garbage. He becomes, in a sense, Beth’s mentor, a steady hand guiding her through all the aspects of flirting and partying that she’s clueless about. Lillis could, I’m quite sure, have shouldered all of the film’s narrative weight, but as it progresses the more it belongs to Bettany, and also, quite coincidentally, the worse it gets. 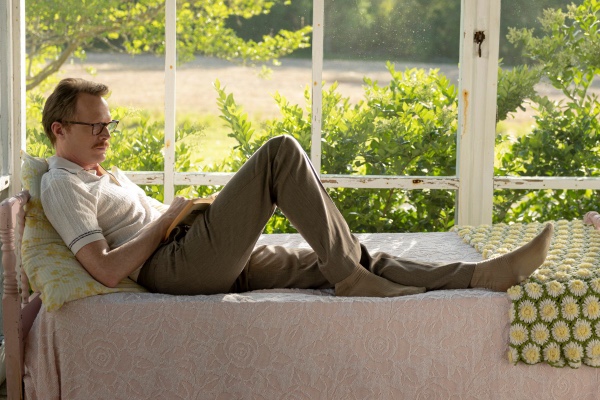 Even in the early going, when it’s at its most intriguing and fresh, there are clichés here, such as Frank and Wally’s lesbian friend Charlotte (Britt Rentschler), who poses when necessary as their girlfriend. But Bettany is so excellent as Frank, and Macdissi is so wonderfully warm and gregarious as Wally, that their relationship commands your investment. It’s with the death of the Bledsoe family’s embittered patriarch Daddy Mac (Stephen Root) that Uncle Frank becomes a road trip, and Lillis’s Beth takes a backseat in favour of Frank returning to his hometown and being forced to grapple with the homophobia he left behind, haunted by a doomed early romance, alcoholism, and PTSD.

This is where Ball begins reaching for lower-hanging fruit, hitting obvious beats and lingering on the trite abuses and tragedies that always seem to befall gay characters in cinema. It’s true that as Frank’s mental state worsens Bettany’s performance becomes more impressive, but however moving and deeply human his portrayal gets, the film around it nonetheless falters, taking the shortest path to the desired emotions but sacrificing a carefully cultivated tone and a well-observed relationship to get there. Wally’s relative ignorance of the South’s potential dangers for him read as contrived and silly, and his warm, smiling embrace of Frank’s family, who even at their most understanding tell him he’s still inevitably going to hell, is borderline insulting.

The unearned optimism and sentimentality of Uncle Frank’s final moments were a deal-breaker for me. But the film is nonetheless wonderfully acted and undeniably well-intentioned, and there’s a great deal to like in its observations and wry wit. If only it had maintained its convictions all the way through.