The Walking Dead: World Beyond season 1, episode 10 recap – “In This Life”

“In This Life” reveals the — hilariously ironic — importance of the so-called asset, but it also sets up a much more interesting second season.

“In This Life” reveals the — hilariously ironic — importance of the so-called asset, but it also sets up a much more interesting second season.


This recap of The Walking Dead: World Beyond season 1, episode 10, “In This Life”, contains spoilers. You can check out our thoughts on the previous episode by clicking these words.

The first season finale of World Beyond opens with Leopold missing his daughters, speculating to the openly suspicious Dr. Lyla Bellshaw that Hope is probably getting into trouble. He’s right, of course, since she’s presently pulling a gun on Huck, but this is in service of justifying why Hope is the so-called “asset” to the CRM, which turns out to be so hilariously ironic that it plays as something of a joke at the show’s own expense. But we’ll get to that.

In the meantime, “In This Life” catches up with Silas, barbecuing meat, and then Elton himself catches up with him having followed the smoke. Percy, now conscious, is there too. Back at the house, Iris explains some of her misgivings about Huck to Felix, but he doesn’t believe her — proof, surely, will be found in the room that Huck warned them away from searching in the previous episode; the one that apparently contains the house’s former occupants.

On the road, Hope tells Huck that she deciphered her message and she knows what she’s up to, leading Huck to confess. But they’re interrupted by zombies which they need to fight off together, which Huck coaching her through the encounter just as she has been doing throughout the season. Predictably, when Iris and Felix investigate the closed room back at the house, they find it’s full of supplies that could have fixed both the truck’s tire and Felix’s leg. If they needed proof that Huck is hiding something, well… they’ve found it. Elsewhere, Percy tells Silas and Elton that Huck shot him and killed Tony, and they all realize they have to find some way of saving the girls.

After their fight with the walkers, Huck confesses to Hope that Leo isn’t in any danger and never was — she sent the messages claiming he was in trouble to get Hope to leave the university. The journey since then has been about training her, getting her ready for the wider world, opening her eyes to the big picture. Huck seems pretty genuine in her desire to try and keep everyone else safe by splitting them up, which doesn’t exactly mesh with her stoving in Tony’s head and shooting Percy, which she also confesses to.

Huck also tells Hope that she has “no idea who she is”, prompting a cut to Leo explaining to Lyla how he first knew she was special — he caught her rebuilding a computer as a child, entirely on her own. That’s why she’s the asset — she’s a genius.

Excuse me one moment. 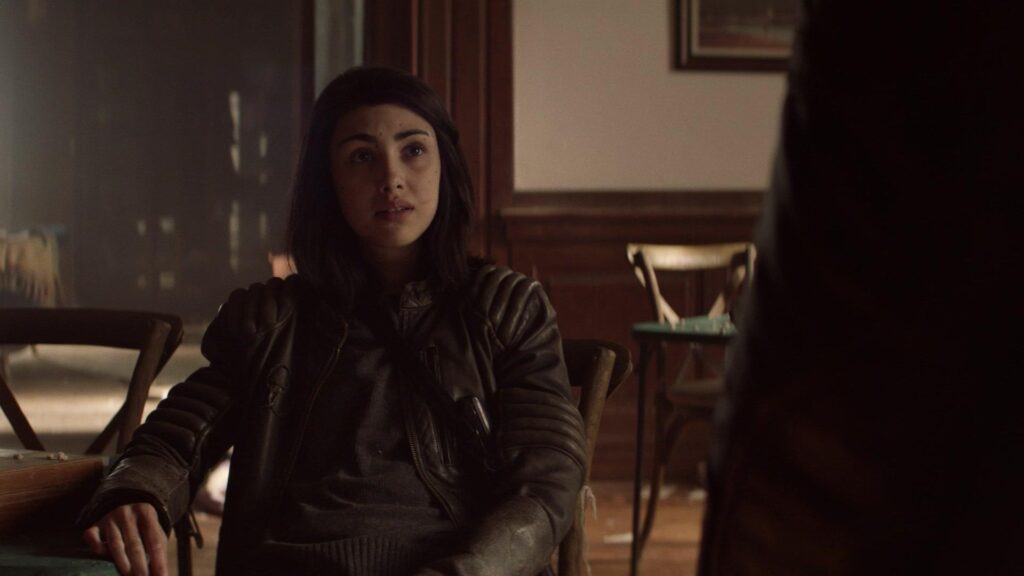 The Walking Dead: World Beyond season 1, episode 10 obviously doesn’t see the irony of this. A show that has been explicitly about thoroughly stupid people making terrible, idiotic decisions all throughout cannot with a straight face expect me to buy into that idea that one of the characters is some kind of savant. Of all the possible reasons for Hope being special, this is easily the dumbest. “In This Life”, though, plays it entirely straight. Huck even insists that the future needs people like Hope. Honestly, I was laughing out loud at this point.

Anyway, Silas, Elton, and Percy are caught short by the arrival of a CRM truck, and a bit later, after an impromptu driving lesson, Hope and Huck are interrupted by the newly repaired truck driven by Iris and Felix. When the gang finally reunites, Huck tries to play it cool and Hope reluctantly covers for her, but Felix snatches her gun and it all kicks off. The house gets set on fire and he’s forced to fight Huck in a surprisingly well-choreographed action sequence.

Elsewhere, the boys try to figure out how to get around the CRM, but Silas, emboldened by the realization that he’s not a monster after all, elects for the heroic self-sacrifice route, surrendering to the CRM so the others can get away and save the girls. Huck gets the upper hand in her fight with Felix, but Hope defuses things by pointing the gun at her own head. She explains how she’s going to go with Huck to keep the others safe, and she’ll be okay since they need her genius — hahaha.

Anyway, it’s tearful farewells all around. Silas surrenders, Hope goes with Huck, and Leopold confesses to Lyla that he thinks it’s possible they’re being lied to and will need her help with an idea, not realizing it’s her who has orchestrated everything behind the scenes and planned for Hope to be delivered to them. Huck and Hope are eventually greeted by Elizabeth in a CRM chopper, who explains to Huck that she was worried about loose ends and had to take care of the ones she left behind. That includes the teams going after the boys, and there’s also a strong intimation that the campus colony hasn’t fared well in their absence.

As Iris thinks back to a conversation with Hope in which the latter insisted that they’re both the asset, and the CRM just don’t know it since they don’t realize what Iris herself can do and how much she has helped Hope — this is illustrated by Iris pushing the power button on the PC Hope built, which hardly makes the point — we get a sense that Hope’s intention is to work from within the CRM to take it down, while Iris and Felix work from the outside. But to close out “In This Life” and thus the first season of World Beyond, Iris and Felix run into a group of people in the woods which includes, conveniently, Will. He and Felix tearfully hug, and he explains that he thought they’d all be dead. When Felix asks why, he says, “You don’t know?” Apparently, they’ve got a lot to catch up on, but the giant group he’s traveling with seems to suggest that the entire campus colony has been displaced.

Thanks for reading our recap of The Walking Dead: World Beyond season 1, episode 10, “In This Life”. For more recaps, reviews, and original features covering the world of entertainment, why not follow us on Twitter and like our Facebook page?