“Never Stop Fighting” was the first season finale more than the second season premiere, tying up some loose ends and finally positioning Aaron Wallace on the outside of the prison walls.

“Never Stop Fighting” was the first season finale more than the second season premiere, tying up some loose ends and finally positioning Aaron Wallace on the outside of the prison walls.


This recap of For Life season 2, episode 1, “Never Stop Fighting”, contains spoilers. You can check out our thoughts on the previous season by clicking these words.

“Never Stop Fighting” was a rare thing for a second season premiere, which is to say it was really the first season finale. I’m aware that sounds weird. But this opening installment really was about tying off some loose ends from last season and pushing prisoner-turned-lawyer Aaron Wallace into a new status quo. Finally free, but by no means out of trouble, this setup promises a very different run of episodes from the ones we enjoyed last year. But first Aaron had to get free, which is what this episode was mostly devoted to.

You’ll recall that at the end of the first season Wallace had argued himself very publicly into a retrial, and Big Bad Glen Maskins had privately urged him to abandon any further legal action on the promise of securing his release from prison. It was hardly a sweet deal, though. Wallace would leave with a felony record and thus the inability to practice law as a civilian. But, as he tries to reason, he only became a lawyer as a means to an end, a way to return to his family. Maskins made sure that, if Wallace took him up on his offer, charges against his friend Jamal and his wife Marie would be dropped or not pursued. Maskins was playing on Aaron’s sense of loyalty. 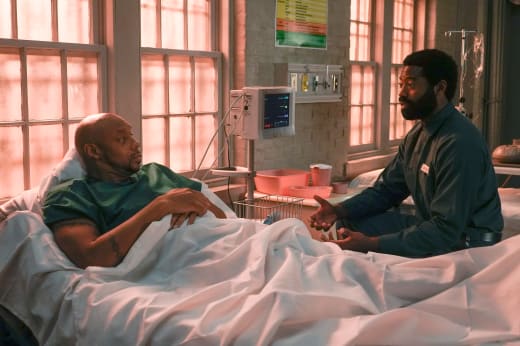 Wallace, after so much time inside, is willing to give up everything he has worked for in order to return home, but it’s Marie who talks him out of it, reminding him of everything he has sacrificed and fought for to get to this point. Thus, Wallace spends much of “Never Stop Fighting” living up to the episode’s title and amassing compelling, incriminating evidence against Maskins. In the end, he had to “voluntarily” step down, citing wanting to spend more time with his family. Good riddance.

Thus, Wallace is exonerated and freed, except he’ll remain on a three-year probation for the assault during the riot. The first thing he plans to do is look into Jamal’s case on the outside. As he leaves, the other inmates cheer and applaud him. I don’t know if that’s really what happened to Isaac Wright Jr., but I’d like to think so.

Naturally, this sets the second season up rather nicely. Wallace is free from prison but not from scrutiny, and his probation means he’s always at risk of being incarcerated once again – especially if he gets on the bad side of the wrong people, which he seems determined to do. It’s a very promising change to the formula, and it’ll be very interesting to see where the show goes from here.

Thanks for reading our recap of For Life season 2, episode 1, “Never Stop Fighting”. For more recaps, reviews, and original features covering the world of entertainment, why not follow us on Twitter and like our Facebook page?