“Homecoming” sees Aaron Wallace finally free, but his life outside doesn’t look like it’s going to be much easier than his life behind bars.

“Homecoming” sees Aaron Wallace finally free, but his life outside doesn’t look like it’s going to be much easier than his life behind bars.


This recap of For Life season 2, episode 2, “Homecoming”, contains spoilers. You can check out our thoughts on the previous episode by clicking these words.

Aaron Wallace is, finally, home. Admittedly he’s on three-year probation and the slightest slip-up could land him back inside, and he’s sleeping on Marie’s couch, and he has a no-nonsense probation officer breathing down his neck and interfering with his pro bono cases, but every cloud has a silver lining. At least he gets to spend time with his grandson, Aaron Junior.

“Homecoming” spends a little while establishing all this. Aaron has been in prison a long time, and you see it in different ways, such as how he responds to screeching sirens outside. But he promised Jamal he’d follow up on his case, and he intends to, even if Henry has a big deal on the table for him, and his PO, Williams, has been specifically tasked with tripping him up.

A lot of what we see here is establishing how Aaron has to work a case on the outside. Ironically, he seems to have less access than he did behind bars, and a more immediate effect on those around him, including Marie, who is clearly struggling to adapt to the situation and reconnect with Aaron. 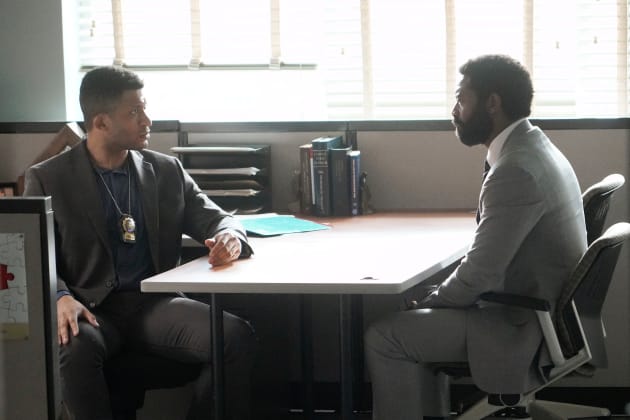 A lot of the friction between these two comes down to money, or at least the idea of not swerving big opportunities out of pride and principle – he’s a free man now, and free men have to pay their way and provide for their families. Aaron is understandably not thrilled with the idea of Spencer Richardson offering a lucrative deal, but turning it down outright is not a simple affair.

Aaron still thinks like someone stuck in prison, fighting a corrupt system. Despite Williams’ warnings, he refuses to play by the rules he lays out. But he’s still quick to ask for Marie’s help in his case, make hasty promises he might not be able to keep, and risk not just his freedom but the little bit of stability he now has on the outside. What Richardson can offer him isn’t just money and the chance to help plenty of people on the inside, but legitimacy – the one thing that all his legal adversaries have tried to wield against him since the show began.

So, he agrees to take the deal. It’s the right thing to do, for the sake of the second season if nothing else. Already, with new characters and a new dynamic, these episodes are shaping up to be quite different, and pleasantly fresh-feeling. Let’s see where it all goes.

Thanks for reading our recap of For Life season 2, episode 2, “Homecoming”. For more recaps, reviews, and original features covering the world of entertainment, why not follow us on Twitter and like our Facebook page?